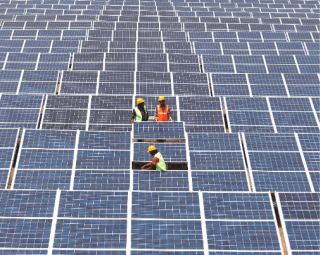 As the coronavirus pandemic starts to wind down, the world’s major economies are struggling to get back to business. The problem seems to be that no one except Elon Musk seems to know how to reopen. No one, that is, except Narendra Modi. While many of the world’s leaders are floundering over coronavirus recovery plans, India’s maverick prime minister Narendra Modi has seized the initiative.

Like most things Modi, his plan to turn the epidemic into an opportunity for remaking India’s economy is long on vision and short on details. “Atmanirbhar Bharat Abhiyan” doesn’t exactly fall off the English-speaker’s tongue, but it is Hindi for “Self-Reliant India Campaign.” Exactly what self-reliance means, Modi isn’t saying. But one thing we know for certain: it’s not a return to the Congress-era “License Raj.”

From independence through the big bang reforms of 1991, India experienced a form of “communism lite.” The Congress Party was firmly entrenched in power, and nearly all big business was organized by (if not necessarily owned by) the state. That all came to an end in 1991 under Narasimha Rao and (more importantly) his reforming finance minister Manmohan Singh. Spurred on by a balance of payments emergency, the erstwhile socialist Singh devalued the currency, cut import tariffs, and deregulated industry. The economy boomed, and Singh would later go on to become a popular two-term prime minister.

Modi plans to spend 20 lakh crore rupees on India’s coronavirus response, and he wants to make it count. For the uninitiated, a lakh is 100,000 and a crore is 10,000,000, so 20 lack crore comes to 20 trillion rupees, or nearly $300 billion. That’s a lot of money in India, where GDP came in at roughly $3 trillion in 2019. At 10% of GDP, Modi can only raise that kind of money with the support of India’s central bank, the Mumbai-based Reserve Bank of India.

But self-reliance is easier said than done. Modi promises to do it with a focus on “land, labour, liquidity and laws” so as to benefit “labourers, farmers, honest tax payers, MSMEs (micro, small, and medium-sized enterprises), and cottage industry.” That sounds like an old-fashioned Gandhian plea for people to wear home-spun cotton. It certainly won’t remake India’s economy for the twenty-first century. India should certainly put more money in the hands of ordinary consumers (which in India means people earning less than $500 a month), but it should be encouraging them to get online, not buy more jewelry.

It may sound crazy, but poverty-stricken India accounts for nearly 30% of global jewelry consumption. Except that that’s not really consumption: it’s investment. Unfortunately, it’s investment in a completely non-productive asset. If India wants become more self-reliant for business investment, the fastest way to do it would be to convince people to shift their portfolios out of jewelry and into shares. That poses a difficult cultural challenge, but it’s an economic no-brainer. Modi’s Bharatiya Janata Party (BJP) government recently increased gold tariffs from 10% to 12.5%. That’s a good start, but it won’t be enough to change deeply-ingrained habits.

At nearly 25%, India’s imports expressed as a percentage of GDP are much larger than America’s 15%. The biggest chunks of India’s imports bill go to oil (17.9%), gold (9.3%), and diamonds (4.9%). Mobile phones, much touted as a potential import substitution growth industry for India, account for only 2.7%, less even than coal (4.7%). These data are from 2017 (the latest available), but the current picture probably looks pretty similar.

If Modi really wants to promote economic self-reliance, the most important thing he can do is improve the country’s energy security. Oil may be cheap right now, but it won’t stay cheap forever. Oil and coal imports have to be brought down, and for India, that means massive investments in solar and hydroelectric power. India lacks major conventional hydrocarbon reserves, and shale gas exploration has turned up few opportunities for commercially-viable fracking. Even if renewables weren’t in fashion, they are the right approach for India.

Hydro development requires long-term government support, will take years to come online, and has been tied up in the usual red tape. As the success of large-scale hydroelectric exploitation in the United States, Scandinavia, and more recently China has demonstrated, there is no more cost-effective source of reliable baseline power. The environmental challenges are tricky, but surmountable. As a flood-prone country on the slopes of the highest mountain range in the world, India would be crazy not to take advantage of its hydro potential. But Modi and his BJP have been in power since 2014 and have made little progress.

That leaves solar. A self-reliant India must be a solar India. Currently, India imports most of its solar panels from China, but the coronavirus crisis has the potential to change that. The big barrier in India is, as always, excessive (even if often under-enforced) regulation. Another is a lack of scale. The government could quickly change all that with a few big tenders for domestically-manufactured solar panels to jump-start the industry. Even if it took foreign firms to set up shop in the country to get things started, India would benefit in the long run.

A self-reliant India needs less investment in gold and more investment in sunshine. India has the investment potential and the market potential. In Narendra Modi, it has a reforming prime minster to match Manmohan Singh. If Modi wants “Atmanirbhar Bharat Abhiyan” to be anything but a slogan, he has to reach for the sun. If sunshine is the best disinfectant, it might just be what Modi needs to get India out of its coronavirus slump.