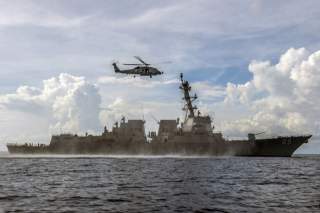 Maritime tensions in Asia are growing and will persist, and yet relations are likely to remain bounded below the threshold of military conflict. Steering through intensified competition in the South China Sea and beyond requires a realistic U.S. foreign policy founded on deep engagement, comprehensive power, and durable principles.

Cooperating with China when interests overlap is in the U.S. national interest. Likewise, confronting China over issues where our interests diverge—including over rules in the maritime and cyber domains—is also integral to America’s future power and purpose. But expectations about dampening all maritime frictions should be kept modest. Even with calls for grand bargains and strategic accommodation, well into the next U.S. administration we will be navigating in the messy middle ground between war and peace. Although such volatility may be uncomfortable, achieving a firmer footing with China will be elusive. That is because the primary competition in the South China Sea is rooted in a reemerging China’s capacity and desire for expanding influence over its neighbors and adjacent waters, en route to securing a position as a if not the major global power in the 21st century.

The Asia-Pacific or Indo-Pacific region will offer some of the greatest opportunities and challenges for U.S. foreign policy in the decades ahead. In addressing what we need to do with respect to maritime territorial disputes in the South China Sea, the United States needs to place all of our foreign policy activities within a comprehensive framework designed to bring about future decades of stability, prosperity, and freedom.

The driving force behind America’s gradual rebalance to the Indo-Pacific is rooted in secular trends. For the first time since the 18th century, Asia is becoming the locus of the global economy and world politics.

It is important to understand that the South China Sea is not just or even mostly about rocks, reefs, and resources. While some have likened China and the South China Sea to America and the Caribbean, such an analogy quickly loses its explanatory power because of the stark differences between the two bodies of water and changes in the global economy. Unlike the Caribbean in the mid-19th century, the South China Sea is at the nexus of the global economy.  All maritime powers depend on it because through its waters sail half of the world’s commercial shipping by tonnage (valued at more than $5.3 trillion). Furthermore, Southeast Asian nations comprise nearly two-thirds of a billion people with a GDP pushing $4 trillion in purchasing power parity; and there are great expectations for those economies in the decades ahead. Finally, we live in—or should at least strive to live in—a world governed by rules, not spheres of influence, such as those that may have been more in vogue in the 19th century. Thus, it is rules and order that remain at the heart of America’s interests in Asia and the South China Sea.

Over the past decade, China has transitioned from a hide-and-bide approach to greater activism in and beyond the South China Sea. While China has become marginally more transparent, in important areas it is as opaque as ever. As with China’s expansive nine-dash-line claim to the South China Sea, there appear to be important areas of policy that China simply does not wish to clarify.

China’s largely opportunistic push into the South China Sea is backed by an impressive array of military and nonmilitary actions designed to exert greater control over its neighborhood. China is enhancing its strategic position through its incremental salami slicing tactics, which accrete to major changes to the status quo while warding off escalation. Its hasty island-building project is not just intended to change facts on the ground before international legal proceedings can run their course, but also to gain an upper hand over the region and intimidate neighbors into aligning with China. Consistent with China’s non-kinetic “three warfares” (informational, legal, and psychological) doctrine, this positioning is a mixture of the physical and mental.

China continues to set the pace in regional defense spending with continuous, near-double-digit increases that now outpace the growth of the Chinese economy. Investments in ballistic and cruise missiles, for instance, are eroding America’s previous advantage in precision strike systems. As a result, America’s ability and perceived willingness to risk projecting power forward in defense of allies and partners is likely to be increasingly called into question unless the United States finds effective responses. China is also busy building many more cost-effective capabilities, military and non-military alike, to deny and ultimately control sea and air space, as well as cyber and outer space, in and around the South China Sea, East China Sea, and Taiwan Strait.

The United States, too, must step up the level of activity to counter potential regional instability.  At stake is whether the future order is built on fair and inclusive principles akin to those that have empowered China’s and Asia’s remarkable stability and prosperity. Working with allies and partners, the United States can continue to realize its vision of an inclusive, stable, and rules-based order. There are ten essential elements of a U.S. foreign policy to deal with the South China Sea. They are intended to foster cooperation backed by clarity of purpose, fairness, and multidimensional strength.

First, the United States should regularly underscore our enduring principles for the South China Sea. As with our approach to unimpeded access throughout the global commons, the United States strives to strengthen the rule of law and uphold the peaceful settlement of disputes. Our officials should persist but be even more specific in spelling out America’s positive vision for an inclusive, rules-based regional order. Customary international law and the United Nations Convention on the Law of the Sea should be fully respected, including the freedom of navigation through exclusive economic zones and the right of innocent passage in territorial seas. Furthermore, there should be no force or coercion to settle disputes, such as those that exist over the Spratly and Paracel Islands and Scarborough Reef. While the United States should remain neutral on sovereignty disputes, it has a responsibility to ensure that disputes should be revolved or managed without using force, threats of force, or coercion. Principles rooted in the rule of law and peaceful resolution of disputes should ideally be embedded within a comprehensive and coherent regional strategy.

Secondly, the United States should reinvest in our own long-term economic power, something that can be achieved in large part by intensifying our trade and development ties in the Asia-Pacific. Completing the Trans-Pacific Partnership (TPP) can demonstrate America’s ability to complete complex free-trade agreements and regional architectures. We need to be prepared to bring more economies, from the Philippines to the Republic of Korea, into TPP, the first major multilateral trade agreement with a heavy focus on the new economy based on information technology and services. The United States can use TPP to gain critical leverage vis-à-vis BRICS nations regarding future rules for trade.

We also need more energy, imagination, and resources to assemble a serious multilateral development initiative of our own. We can wait and see about how complementary China’s Asian Infrastructure and Investment Bank (AIIB) and “One Belt, One Road” initiatives will be to existing Bretton Woods institutions and other development initiatives. Meanwhile, we can do far better on development than the patchwork quilt of the Lower Mekong Initiative. Congress should request from the current and future administration a development strategy that includes proposals for new initiatives. I have in mind a major international public-private partnership in support of human development in Asia. Rather than try to match China’s push for physical infrastructure, the United States should focus on areas of comparative advantage related to the new knowledge economy, human capital and education, science and technology, health, and energy.

Thirdly, the United States needs to deepen and broaden its diplomatic and practical support for the Association of Southeast Asian Nations (ASEAN). ASEAN centrality has already been a key tenet of the U.S. approach to regional multilateral architecture. But the United States should do more to achieve ASEAN unity and bolster ASEAN-centered institutions on at least four levels: with ASEAN as a whole, with ASEAN claimant states, with individual ASEAN member states, and with maritime allies and partners in and outside of ASEAN (including Australia, India, Japan, and the Republic of Korea). On the initial level, the United States should continue to seek to preserve ASEAN consensus over the norms related to the rule of law and peaceful resolution of disputes. Key partners such as Singapore and Indonesia can be instrumental, but so, too, can our longstanding ally Thailand, which is the ASEAN coordinator for outreach to China.

Working to achieve ASEAN unity over basic principles is useful, but the United States can find more effective diplomatic traction by forging a stronger caucus among claimant states.

Hence, fourthly, the United States should help the ASEAN claimants (not just the Philippines and Vietnam, but also Malaysia and Brunei) to come to a common understanding and work towards a common goal that is fair to all countries. They can reduce differences, set forth common expectations for conduct, and forge cooperative approaches to diplomacy and security. These do not necessarily entail the resolution of the sovereignty and all jurisdictional disputes, which is in any case not possible without the participation of China, but they could conceivably reflect principles that hew to the rule of law and peaceful resolution of disputes. Exploiting differences among ASEAN claimants, China has tried to inhibit the formation of a regional consensus by slowing down processes such as the Code of Conduct negotiations between it and ASEAN. A viable consensus among the ASEAN maritime caucus could break this logjam. At the same time, the United States should help ASEAN claimant states to work towards that common goal by giving support in areas such as diplomacy, facilitation, and legal expertise.