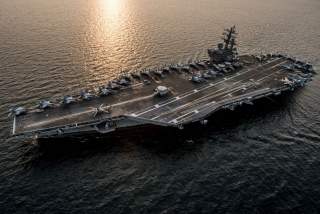 President Elect Donald Trump, correctly understanding the current strategic environment, is committed to building a 350 ship Navy. This will set aside thirty years of steady declines in the size of the Navy and put those who would make themselves the United States’ enemy on notice that the “irreplaceable nation” has picked up the mantle of leadership that it so recently cast off in an attempt to become more “normal” and less “dangerous.”  However, while 350 ships may seem huge in comparison to the battle force of 272 ships we have today; it actually represents the bare minimum that is actually required to maintain presence in the 18 maritime regions where the United States has critical national interests.

The last time the US Navy had 350 ships in its inventory was in early 1998, at which time it had twelve carriers, 30 cruisers, 53 destroyers, 40 frigates and 70 fast attack submarines. Five years later the Navy crashed through the 300 ship mark on its way to the 272 ships it has today, which includes 10 carriers, 22 cruisers, 62 destroyers, no frigates and 54 fast attack submarines.  Much of this decline has been driven by the fact that individual ship costs have gone up owing to new advanced technologies while the Navy’s ship construction spending account has remained flat, driving the number of ships that can be purchased downward.

In addition, the Department of Defense’s budget was slashed by nearly $80 billion per year from its 2011 projections due to President Obama placing a higher priority on domestic spending and the impact of the 2011 Budget Control Act sequester provisions. Both of these factors were disastrous for the nation’s defense and the fact that the Navy’s leadership was able to keep as many new ships under contract as it did, despite pressures from the Secretary of Defense, was nothing less than heroic. The Navy’s budget today should be around $190 billion per year according to the last threat-based budget proposed by then Secretary of Defense Robert Gates in 2011, but instead it struggles with a $155 billion budget imposed by the administration he left in disappointment.  These downward driving budgetary pressures, as well as the increasingly evident erosion of American prestige in the international arena, would clearly have continued under a Clinton administration that presented itself as an Obama third term.  These factors led to discussions, including a recent strategic choices war-game, that proposed tradeoffs within the present Navy budget to help increase the Navy’s ship count in an attempt to increase presence and slow the disintegration of the international system of free trade.  These discussions, which I either willingly participated in or led, included proposals to cut the overall carrier force in an attempt to grow the overall Navy while staying within the current Obama administration sequestered budget limits. Fortunately, those discussions ended with the election of Donald J. Trump and the retention of Republican majorities in the House and the Senate.  We now have a President and a Congress committed to a “peace through strength navy” that will once again allow the United States to maintain global security and stability on the seas.

The problems identified with aircraft carriers can be corrected within the Trump Navy plan.  The issue of the carrier’s costs as a proportion of the Navy’s shipbuilding budget (one Ford class carrier is nearly the equivalent of an entire year’s shipbuilding budget) can be addressed both by increasing the shipbuilding budget to the level it would be at had the government continuously adjusted it for inflation over the past fifteen years, and by returning to a schedule wherein carriers are produced every four years rather than every five, a decision that the Navy made to save money in the short term but only increased the net cost of the ships over the long run. Changing the production schedule will also have the additional benefit of getting the force back to 12 carriers in a shorter time, a move that is critical if we are to take pressures off the carrier force and reduce their deployments from the 9-12 months periods of recent years back to the six month deployments of the Cold War.  Additionally, the Navy should also look at technical challenges with catapults and arresting gear within the Ford carrier program itself in order to drive out inefficiencies and drive down costs.

The second problem was that of defending the carrier in the new anti-access / area denial environments that the Navy increasingly found itself in around the world. A 272 ship Navy simply does not have enough cruisers and destroyers to surround and protect each of the carriers it deploys, but a 350 ship Navy can generate enough platforms to protect a twelve carrier strike force. However, the key vulnerability of our carriers to attack is driven not by the threat or even the ships that surround them, but rather it is a product of the present composition of the carrier’s air wing, which forces these large capital vessels to operate ahistorically close to land. Changing the composition of the carrier’s embarked air wing is the key improvement the Navy can make in the near term to guarantee the success of its carrier strike groups in the future.

The aircraft carrier is a platform, but its air wing is the weapon it employs.  At the height of the Cold War, the U.S. Navy increased the size of the aircraft carrier to carry large aircraft capable of delivering nuclear weapons deep inside the Soviet Union, and thus was born the “Super Carrier,” large enough to launch and recover 80,000-pound aircraft.  The only reason we have super carriers today is to be able to carry aircraft that can fly long distances.  During the 1950s the average unrefueled range of the carrier’s air wing was 1,200 miles with some aircraft able to go 1,800 miles to deliver their weapons. By the late 1970s the unrefueled range number had shrank somewhat to 900 miles, but the carrier had developed a strong organic tanking capability that could extend the range of its aircraft in flight to meet strategic requirements.

However, the end of the Cold War led defense leaders to make a number of false assumptions regarding the future security environment. The deep strike mission was given to the Air Force as it was assumed that there was no need for service redundancy in this capability and an entire generation of long range aircraft retired from the carrier’s deck.  The submarine threat to the carrier was assessed as low, and carrier-based aircraft and helicopters associated with the anti-submarine warfare mission were decommissioned and sent to the aircraft boneyard near Tucson, Arizona. Lastly, and most disastrously, it was assumed that carriers in the future would operate in permissive waters, allowing them to launch their aircraft close to their enemy’s shores. This assumption placed a greater emphasis on carrier sortie generation rates while decreasing the importance of range within the carrier’s air wing. Today, the air wing’s average unrefueled range is around 500 miles and its organic mission tanking capability is significantly degraded when compared to the past.

If the twelve carrier, 350 ship, Navy described by President Elect Trump is to be credible and mission effective, part of the new administration’s plan must address the shortfalls in the carrier air wing. The first and easiest move should be pull the nearly 90 S-3B Viking anti-submarine aircraft with 9,000 hours of life still on their wings out of the Davis-Monthan Air Force Base boneyard and get them refurbished and back into the carrier air wing along with some additional anti-submarine helicopters. With both Russia and China deploying more advanced and quieter submarines, we need to ensure that our carrier force is protected from this threat.

Second, extend the range of the F/A-18 Super Hornets that we already have by completing testing of the conformal fuel tanks that are currently under development and accelerate their introduction to the fleet. These tanks can extend the range of the present air wing without significantly adversely affecting the performance characteristics of the aircraft. A combination of a longer ranged Super Hornet and the new F-35C Lightning II aircraft, which already has good range, will help the carrier to stand off further from emerging threats.

Third, push to get the unmanned MQ-25 organic mission tanker into the fleet quickly, and ensure that it integrates stealth characteristics into its initial baseline design.  A stealthy organic tanker is critical when considering that China’s J-20 seems designed for the mission of targeting the Air Force’s large fleet of “Big Wing” refueling tankers. If one or two of these high value tankers are taken out early in the fight, the ability of the United States’ fleet of F-22s and F-35s to reach their targets will be significantly compromised. However, four to six stealthy MQ-25s launched from a carrier deck with enough fuel to double the range of two F-35Cs each can change the calculus in the anti-access/area denial environment instantly.  Additionally, a baseline MQ-25 design that includes basic stealthy characteristics can easily evolve to become an unmanned strike platform itself as technology evolves to allow for this capability. An air wing that includes longer ranged Hornets, Lightning IIs and an unmanned aerial strike vehicle would return the super carrier to its historical efficiency and lethality, and would be the truest expression of the vision expressed by the President Elect.