20 Technologies That Will Keep the U.S. Air Force Flying High 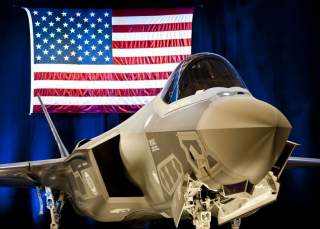 A common refrain in the halls of the Pentagon as the defense drawdown continues in its fifth year is that the Defense Department has run out of money, and now it’s time to think. Recently, the services have done just that—with the latest being the U.S. Air Force’s release of a future operating concept.

Space control—or at least denial of enemy space dominance—is achieved through maneuvering satellites like the secretive X-37B, decoy spacecraft, and the rapid launch of microsatellites from fighter or other aircraft to preserve communications or set up a new, localized network. Uninhabited “missile trucks” have replaced the A-10 and F-35 in the close-air support mission based on an attack variant of the forthcoming T-X trainer.

While there is much more to the Air Force’s new operating concept than sexy technologies, the focus of the vision is to change how they are employed by cross-domain trained, highly-competent and technical airmen.

The Air Force Future Operating Concept envisions a far different kind of future warfare in the air, out in space, and within cyberspace. Though the concept explains new ways of thinking about personnel, its most striking feature is its wholesale change in Air Force acquisition priorities. Instead of purchasing exquisite aircraft and using cheap payloads, the Air Force plans to invert the relationship and acquire a balanced high-low mix of capabilities.

The concept contains dozens of technologies that the Air Force wants to buy, the most prominent of which are featured below as if submitted by the Air Force in a forthcoming budget request, complete with planned operational dates. Another striking feature is that most of these technologies are already in development by the Air Force, DARPA, or another U.S. military service. With the exception of reliable hypersonic weapons, the Air Force could conceivably acquire most of these new systems by the early- to mid-2020s.

Given the smart and innovative ideas within the Air Force’s new operating concept, we hope they do just that.

ALASA is a current DARPA program in development on the F-15 aircraft that straps a mini launch rocket with its payload to the fighter jet. Because the air near Earth is so much denser, a fighter jet can fly to high altitude and launch a smaller rocket capable of completing the trip to space and deploying microsatellites. In the future, the Air Force views the afterburning F-35D as a candidate to rapidly launch microsatellite clusters into orbit to provide resiliency and modularity to the military satellite constellation.

The Air Force desires a set of kinetic and nonkinetic options to contribute to the space control mission. Though some options might involve air-launched kinetic kill vehicles or space-based “repair” satellites, most options will involve nonkinetic space-based electronic warfare or directed-energy platforms cued by space-based space surveillance (SBSS) satellites.

Since 2011, a joint Boeing/Air Force/DARPA X-37B space plane has spent years slightly below low earth orbit. The X-37B is a reusable mini-Space Shuttle with a payload bay about the size of a car. A follow-on program would carry advanced satellite maintenance and space-based awareness capabilities, and might even contribute to the SCCS mentioned above.

The F-35D model, presumably a derivative of the conventional Air Force F-35A. The service also envisions this model as being optionally manned and capable of advanced command and control for other uninhabited systems including the optionally manned LRS-B, uninhabited cargo and aerial refueler, and unmanned missile trucks. The Air Force is already exploring an up-engined variant of the F-35 in its ADVENT (adaptive versatile engine technology) program.

The UCART is an optionally manned family of systems primarily composed of a low-observable long-range aerial refueling tanker and a long-endurance modular cargo aircraft—and some versions of each. The stealthy tanker might credibly be based on the Navy’s X-47B, which has already completed aerial refueling missions. The unmanned cargo craft might look something like Lockheed’s proposed Hybrid Wing Body airlifter.

The U-2 successor program envisions a low-observable, high-altitude ISR aircraft capable of collecting multiple forms of intelligence in denied and high-threat areas as a counterpart to the RQ-4 Global Hawk and its unmanned tactical counterparts. In concert with DARPA, Lockheed has already been conducting initial research on both an exquisite SR-72 hypersonic ISR aircraft and a lower-cost uninhabited U-2 follow-on.

Capable of autonomous and semiautonomous operation, the MMLR is a low-cost aircraft meant to ferry weapons into the battlespace to expand the usable payload of the F-35.

The Air Force plans to develop a high-atmospheric long-endurance aircraft, likely uninhabited, to backstop the satellite communications network and line-of-sight communications. Such an aircraft, perhaps modeled on the liquid hydrogen-fueled Boeing Phantom Eye, would remain at high altitude for as long as two weeks to provide a core communications suite to the Air Force’s redundant Joint Aerial Layer Network vision.

The Air Force needs a low-cost, expendable, autonomous cargo drone to carry out resupply in contested airspace. Though the 3-ton payload Lockheed/Kaman K-MAX autonomous cargo helicopter is too high-end, the U.S. Marine Corps has operationally demonstrated the concept’s reliability in Afghanistan since 2011. Yet something like the SOCOM/MMIST CQ-10A/B Snowgoose costs less than $1m and is capable of carrying 600 pounds of cargo 200 kilometers.

To complement swarming cargo drones in contested airspace, the Air Force is looking for a hybrid airship to carry heavy lows at low cost in permissive airspace, freeing the fixed-wing Air Mobility Command fleet for time-sensitive, higher-threat missions. Such a program could easily modify commercial, off-the-shelf options such as Lockheed’s LMH-1 airship, which can carry 20 tons of cargo over 2600 kilometers.

Though already well along in its development, the long-range strike bomber features prominently in several future Air Force missions. Stealthy, optionally manned, and capable of launching kinetic and electronic payloads, the LRS-B is a critical component of holding defended enemy assets at risk. While the current program calls for 80-100 aircraft, the Air Force’s embrace of the LRS-B in the Future Operating Concept supports analyses showing that the Air Force needs more like 170 aircraft.

The Air Force desires an air-launched hypersonic weapon capable of employment from several platforms including fighters, bombers, and possibly the MMLR missile truck and high-altitude platforms. While the employment on the F-35 or F-22 would require specialized construction, a common launching kit could be employed on nonstealthy aircraft to maximize the numbers of airborne weapons available given the reduced relevance of distance. The Air Force and DARPA have a number of programs pursuing hypersonic vehicles such as the Raytheon Tactical Boost-Glide vehicle slated for flight demonstration prior to 2020, the follow-on to the Boeing X-51 Waverider scramjet-powered vehicle, and the Lockheed High Speed Strike Weapon, slated for 2018 flight testing.

The AAAC envisions the refitting of current and future Air Force cargo aircraft with the capability to drop or launch a full range of nonlethal payloads. Like the WC-130J, this program will allow cargo aircraft to carry everything from mid-sized UAVs to the MALD-J Family of Systems. DARPA already operates the Gremlins program for initial research in this area.

Underpinning the bevy of autonomous aircraft and munitions envisioned by the Air Force, F-35 and LRS-B pilots must be able to control several aircraft at once. Building on the flight control systems of the RQ-4 Global Hawk, Navy experience with the X-47B and swarming Common Unmanned Surface Vehicle, and Army experience with Apache/Grey Eagle teaming, the Air Force should be able to developed advanced command-and-control systems for the next generation of pilots.