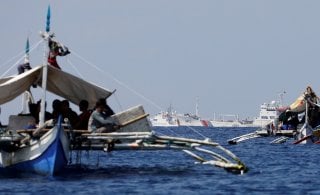 Joe Biden’s acceptance speech at the Democratic National Convention on Thursday mentioned China once, in passing about the manufacturing of medical and related supplies.

One of Biden’s foreign policy advisers, Ely Ratner, has recently hinted a Biden administration would replay President Obama’s approach to the Chinese party-state. Ratner’s main thrust is that America should focus on strengthening itself rather than confronting Beijing, deriding the notion of a global competition with Chinese communism. His remarks recall what Biden himself said last May when he inexplicably maintained the Chinese were “not competition for us.”

Although the Democratic Party’s platform to its credit includes strong language on China, those robust planks feel at odds with the Vice President’s expressed views.

Perhaps the best indication of what he would do in the future is what happened in the past. A crisis now simmering in the contested South China Sea, the eventual result of poor decisions in the Obama administration, could tell us a lot about Biden’s China policies.

On Friday, Chinese Foreign Ministry spokesman Zhao Lijian pushed back against a Philippine protest lodged the previous day. “It is beyond reproach for China Coast Guard to conduct law enforcement in Huangyan Dao waters as it is a lawful practice,” Zhao said, using the Chinese name for Scarborough Shoal. The dispute began when China in May confiscated payaos, fish-aggregating devices of Philippine fishermen, near that feature.

The back-and-forth between Manila and Beijing seems manageable at the moment, but Beijing has been turning up the rhetoric. Early this month, for instance, Hong Kong’s South China Morning Post reported that Wang Yunfei, a “retired Chinese naval officer” and a “Chinese military adviser,” said President Donald Trump might start a war over Scarborough before the November election in the U.S.

The paper’s stark reporting—Beijing sometimes uses the Post to propagate its narratives—signals the shoal could be Biden’s first challenge from Beijing in the early months of his presidency.

Biden should be no stranger to the shoal, inside Beijing’s infamous “cow’s tongue,” defined by nine dashes on official maps. Inside the tongue is about 85 percent of the South China Sea, and Beijing maintains it has sovereignty to every feature there. China claims all the waters inside the dashes are sovereign as well, calling this closed-in sea “blue national soil.”

China made Scarborough some of the most important real estate on earth. After the Philippines detained Chinese poachers in early 2012, Chinese vessels swarmed the feature, only 124 nautical miles from the main Philippine island of Luzon and about 550 nautical miles from China’s Hainan Island. The shoal, just rocks above the high-tide waterline, is strategic because it guards Manila and Subic Bays.

In June of that year, Washington brokered an agreement for both sides to withdraw their craft, but only Manila complied. Beijing has been in firm control ever since.

The Obama administration, despite the audacious Chinese seizure, decided to let the matter drop. As a “senior U.S. military official” told the Washington Post at the time, “I don’t think that we’d allow the U.S. to get dragged into a conflict over fish or over a rock.”

This may have been just a “rock dispute,” as it was dismissed in Washington at the time, but there were adverse consequences for the United States. For one thing, the Manila political establishment was unnerved by the Obama administration’s failure to defend sovereign territory covered by the U.S.-Philippines mutual defense treaty, and this lead to the almost complete breakdown in relations between the two allies when the already anti-American Rodrigo Duterte took office as president in 2016.

Moreover, by doing nothing to hold China accountable for its deception, an act of territorial aggression, America empowered the most belligerent elements in the Chinese political system by showing everybody else in Beijing that aggression worked.

Within months after taking control of Scarborough, an emboldened China rapidly stepped up incursions around the Senkaku Islands in the East China Sea, claimed by Beijing but under the control of Japan. Moreover, the Chinese continued pressure in the South China Sea, especially at Second Thomas Shoal, like Scarborough thought to be part of the Philippines, as well as other Manila-controlled features.

And soon Beijing began to reclaim features in the Spratly chain, in the southern portion of the South China Sea, and turn them into military outposts. Admiral Harry Harris, then commander of U.S. forces in the Pacific, called the newly created features China’s “great wall of sand.”

The Obama team, continuing its abandonment of Manila, also failed to support its ally after the Permanent Court of Arbitration in The Hague handed down its landmark decision in Philippines vs. China in July 2016. The decision invalidated Beijing’s nine-dash line and almost all of China positions.

Among other rulings in favor of Manila, the panel decided China had violated the traditional fishing rights of Filipino fishermen by exercising control of Scarborough.  Moreover, the panel ruled that Beijing had operated its vessels at the shoal so as to create a “serious risk of collision and danger to Philippine ships and personnel,” breaching its international obligations.

The Philippines, as a signatory to the U.N. Convention on the Law of the Sea, brought the action in 2013, shortly after the Chinese had seized Scarborough.

Although Secretary of State John Kerry did say Beijing should accept the award, he did not pressure China to honor its obligation to accept the ruling. Instead, he leaned on Manila to bargain, backing the Chinese position on starting talks. The Obama administration was more intent on avoiding a reckoning with a lawless China than upholding centuries of American policy of defending the global commons.

The Financial Times reported that President Obama in March 2016 privately warned Chinese ruler Xi Jinping that he would do all he could to prevent the reclamation of Scarborough, and there are indications Obama repeated the stern words during the G20 meeting in September of that year in the Chinese city of Hangzhou. Obama apparently limited damage, but only after China made great gains in the South China Sea.

The Trump administration has taken a more effective posture in that critical body of water, especially starting its second year. The new Washington attitude is obviously a reflection of Trump’s more-realistic perception of China and surely a reaction to growing Chinese assertiveness. Beijing has, since February, gone on a bender in its peripheral waters, engaging in boat-bumping and other incidents against Japan, Taiwan, the Philippines, Vietnam, Malaysia, and Indonesia.

So far, Chinese aggressiveness—it is termed “Wolf Warrior diplomacy”—this year has yielded virtually no advantage to Beijing. The risk, however, is that Xi and Chinese officials are waiting for a Biden presidency so that it can strike again.

Kerry and then Assistant Secretary of State Kurt Campbell were identified with Obama’s Scarborough Shoal policies, yet Biden, the administration’s foreign policy expert, must have had a hand in shaping the White House’s misguided response.

Whatever Biden’s role then, the candidate has signaled in various remarks that he will go back to pre-Trump policies that failed to take into account the militancy of the Chinese regime. In May of last year, for instance, while uttering his manifestly untrue no-competition line, he stated “they’re not bad folks, folks,” referring to Chinese leaders.

These sunny views, coming after the Scarborough events, suggest Biden will return to the “engagement” approach that sought to strengthen China in hopes it would enmesh itself in the liberal international order. And he certainly does not appear inclined to adopt confrontational policies.

In any event, China’s officials must think Biden will not challenge them. They have, after all, launched an all-out effort to elect the former vice president, through their public diplomacy, their propaganda, and their troll farm operations.

The concern is that the current low-level sniping between Beijing and Manila around Scarborough will continue until Joe Biden is president, when the aggressive Xi Jinping will test a new U.S. leader.

America failed at Scarborough Shoal in 2012, and Xi must be thinking it will fail again next year.