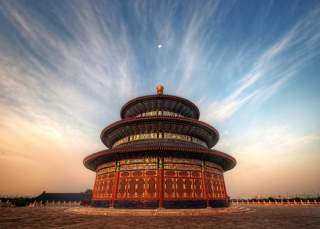 China, the Financial Times noted Friday, could exhaust its foreign exchange reserves within a year as it defends the value of its plunging currency, the renminbi. The paper’s arithmetic is correct of course, but the projection, which at first sounds alarming, is actually optimistic. Beijing might be broke in months—and maybe by the end of this year—despite now holding the world’s largest foreign exchange reserves.

At the same time, the Chinese central government has been supporting stock valuations through various means, especially the direct purchases of shares. Beijing’s efforts to defend both stocks and the currency are severely straining its finances.

China’s problems were a long time in the making, but they became evident this spring, when the main indexes measuring the Shanghai and Shenzhen stock markets peaked on June 12 and then fell precipitously. In early July, Beijing, in a series of announcements, unveiled its rescue program, which included the government buying of shares.

The ill-conceived effort was largely abandoned, it appears. As a result, shares fell hard last Monday, now known in China as “Black Monday,” and the following two days. The Shanghai Composite, the most widely followed index of Chinese stocks, ended trading on last Wednesday down 43.3% from its June 12 peak.

Chinese leaders, however, took markets by surprise on Thursday, when shares snapped their five-day losing streak. The Shanghai Composite was down 0.7% entering the last hour of trading of the afternoon session. Massive government purchases of large-cap stocks sent prices soaring in the final minutes, and the index closed up 5.3%.

Sources told Bloomberg that Beijing’s buying was intended to prevent stocks from plunging during the run up to the September 3-4 holiday to mark the 70th anniversary of the end of World War II, what China has renamed the Chinese People’s War of Resistance against Japanese Aggression.

Beijing repeated the trick Friday, engineering an impressive rally in the last 90 minutes of trading. The Shanghai index posted a 4.8% gain for the day. Late buying was also evident Monday, although it was not quite enough to completely erase the sharp drop in the morning session.

Are happy times here again? About a year ago, Chinese technocrats created a stock market boom by doing nothing more than talking up the market. Unsupported by fundamentals—either a robust economy or rising corporate earnings—the market is inevitably coming back down unless the Chinese central government purchases more shares. Beijing’s so-called “national team”—a collection of state entities—appears to be the only big buyer in the market.

The government has a large “war chest,” believed to be between 2 and 5 trillion yuan (about $322 billion to $807 billion). Whatever its size, the fund has been rapidly depleted since officials started buying stock in large quantities.

In the middle of this month, Goldman Sachs estimated the government had spent 800-900 billion yuan to acquire shares. Christopher Balding of Peking University’s HSBC Business School, taking a more expansive view of Beijing’s market-supporting initiatives, believes the government has already shelled out $1.3 trillion.

Theoretically, Beijing can spend all it wants to purchase stocks because it is using its own currency. There are many factors constraining its stock buying, but money is not one of them. The central government, in an essentially no-inflation environment, can run the printing presses forever to buy every listed share, if that is what it chooses to do.

Chinese officials, however, do not have unlimited flexibility when it comes to their other intervention program, the support of the currency. On the 11th the People’s Bank of China, the central bank, devalued the renminbi and then allowed the currency to fall in succeeding days. At the same time, the PBOC, as the institution is known, promised to allow the market to influence the currency’s exchange rate.

The central bank kept its promise—for about two days. On the 14th, it arranged, in the final 20 minutes of the trading day, to have at least two state banks sell dollars to support the yuan, driving up its value. In following days, the PBOC orchestrated similar state bank dollar-selling.

Since then, the central bank has aggressively supported the currency, spending an estimated $200 billion for this purpose. That figure suggests an acceleration in spending from the period immediately following the devaluation, when the burn rate was thought to be about $10 billion a day.

Burn rates never stay the same in a crisis. Beijing will undoubtedly have to spend at a substantially faster pace to support the renminbi if market participants lose even more confidence in coming weeks and months. Moreover, the Chinese central bank will have to spend big if the Federal Reserve raises U.S. interest rates next month, as it still might, and Beijing has no choice but to sell dollars to handle unprecedented capital outflow, which could be running at the rate of $70 billion a month.

Considering everything, it is unlikely that China’s forex reserves will last as long as a year, as the Financial Times estimated, even if they are as large and liquid as the State Administration of Foreign Exchange, the central bank’s custodian of the reserves, has claimed.

Beijing will not allow the reserves to plunge to zero, so look for Chinese officials to adopt emergency measures of some kind. Vice Finance Minister Zhu Guangyao, in stark comments to CNN released on Saturday, said “we must take action” if there is “systemic risk to the financial system.”

And what sort of action might that be? Franklin Roosevelt shut the banks in March 1933 and Hong Kong officials closed their stock market in October 1987, so Chinese President Xi Jinping may just stop stock and currency trading altogether. That may sound inconceivable now, but the fact that Vice Minister Zhu would talk about systemic risk to a foreign media outlet shows just how serious the situation really is.

In this situation, bland reassurances from Premier Li Keqiang, like the one the State Council released within hours of Zhu’s comments hitting the wires, show disarray in Beijing policy circles. China’s fundamental problem is not messaging, but inconsistent messaging can only make matters worse. As long-time China bull, Arthur Kroeber of Gavekal Dragonomics, told the Financial Times last week, “Markets trade as much on policy signals as on economic reality, and there has clearly been a breakdown of communication between Beijing and the rest of the world.”

Beijing’s leaders, in short, have lost the confidence of market participants, both inside and outside China. Nothing good ever happens when that occurs.

And nothing good is happening now. Before the August 11 devaluation and the announcement of market reforms, China had what a Beijing insider “with ties to the PBOC” called “a credible peg to the U.S. dollar.” The central bank did not need to intervene much, but now, after one inexplicable misstep after another, it has no choice.

Yet even before the latest series of crises, China’s foreign exchange reserves were falling. The State Administration of Foreign Exchange has reported that reserves declined $299.4 billion in the last four calendar quarters.

Despite the plunge, most analysts see no continuing crisis. Yet the rate of Beijing’s dollar-selling tells us the Chinese leadership has few options left and all of them are horrible.