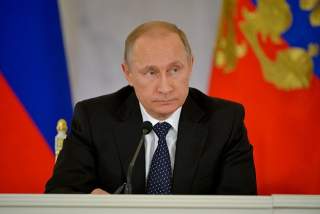 If I were a strategist advising the Russian government on key national-security objectives for 2015 (and I am not), here would be five priorities for the year:

First, the Kremlin needs to beat back the so-called “Maidan challenge” in Ukraine. Any consolidation of a westward-leaning administration, especially one that successfully undertakes the economic and security reforms that would make it easier to contemplate closer and more meaningful relations between Ukraine and NATO and the European Union, without also guaranteeing Russian equities, remains a critical danger to Moscow’s interests. This challenge, after the Orange Revolution in 2004, was met by the implosion of the coalition that spearheaded the dramatic political shift and by its subsequent inability once in government to deliver on any substantial reforms. While former Ukrainian president Viktor Yanukovych is now a spent force and unlikely to return from his Russian exile, what is critical (from Moscow’s perspective) is that Ukrainians develop the sense—particularly in the east and central portions of the country—that, compared with current developments, his administration wasn’t that bad after all. Moreover, it will be critical to show that the promises made at Maidan were empty, and the commitments offered by Western governments will not be fulfilled.

Even with the fall in oil prices and the economic crisis now underway in Russia, Moscow still has many levers to pull in Ukraine, from its support for the separatists to its control of energy resources. There are also many fracture points in the current coalition—reformers versus business figures, nationalists versus those who are open to some sort of practical accommodation with Moscow. Some of the Maidan activists are angry at what they see as a slow pace of change and may be inclined to put pressure on the government as 2015 continues. But there is also a risk that a growing number of Ukrainians in the east who did not cast their lot in with the separatists and supported both the presidential bid of Petro Poroshenko and his party in the Rada elections will become alienated from a government that does not succeed in restoring some degree of normalcy and predictability in the country’s relations with Russia.

Of course, Russia is now under sanctions from the West because of its efforts in Ukraine, so its toolbox for exerting pressure on its neighbor is impacted by a second priority for 2015: a partial repair of its frayed relationship with Europe. Russia needs two things in 2015: a partial relaxation of the sanctions regime, at least in clearing the way for financing and developing new energy projects, and stopping Ukraine’s further westward movement by having enough members of the EU and NATO categorically opposing any further contemplated moves to extend the possibility of full membership in both organizations. It’s clear that Russia’s traditional partner in these matters, Germany, is less reliable now as long as Chancellor Angela Merkel remains in charge.  This is due to the fraying of her relationship with President Vladimir Putin over her perception that she was misled by him at several points in 2014 over events unfolding in Ukraine—so while Moscow will continue to cultivate interlocutors within the coalition, particularly among the Social Democrats, Russian efforts will shift to some of the smaller Central European EU states (among them Hungary and Slovakia) and concentrate on Francois Hollande, deploying the argument that continued sanctions and instability in EU-Russian relations over Ukraine is damaging to the economies of both sides. Russia will need to show more flexibility in its negotiating stance over Ukraine and exert more pressure on the separatists to accept political deals, but in so doing, will hope to have demonstrated by spring sufficient progress in pushing Ukraine towards the decentralization/neutralization solution to get some of the EU pressure on Russia relaxed.

Even if the EU continues with its efforts to diversify its energy sources, European investment and technical support is useful in developing the Russian energy complex to be in a better position to supply Asian markets, as the Total-Novatek gas complex project in Yamal so aptly demonstrates. This brings us to the third priority: forging the Chinese-Russian partnership on the best terms possible for Moscow. Russia had already announced its own “pivot to Asia” well before Maidan, but events in 2014 gave the impression that Russia was becoming more desperate for Chinese support and that Moscow would, on a number of issues, agree to terms that were less favorable for Russian interests because of that need. Russia needs the Chinese relationship just as China finds security in having its northern and western frontiers secured by a strong Russia capable of standing up to the West, and having in Russia a secure source of energy and raw materials that cannot be interdicted or sanctioned by the United States. But Moscow also needs to preserve some balance in its relationship with Beijing, which is why Putin’s planned summit in Tokyo later this year and further movement on Russian projects in the Korean peninsula are so important.

It helps, of course, that Putin has in President Xi Jinping a dynamic interlocutor who understands the long-term value of the Russia partnership for Chinese interests, even if it means compromising on shorter-term issues (such as price for Russian products). The irony is that the relationship Putin may have hoped to have with George W. Bush after 9/11 will be the type of partnership he will enjoy with Xi, given the fact that they will both be shaping the Sino-Russian relationship for the rest of the decade.

An interesting test of the Xi-Putin relationship is whether Russia can help defuse some of the existing tensions between India and China. This is a fourth priority. An improved relationship between Asia’s two giants—but not too improved—serves Moscow’s interests by creating the political trust needed for the ambitious trans-Xinjiang pipeline project that would finally open a direct energy connection between Russia and India. Reduced Chinese pressure on India—and perhaps even progress towards a final settlement of lingering border issues—would also reduce some of the impetus for New Delhi’s improved relations with the United States, particularly in the security sector. A certain degree of competition between India and China is useful to Russia—allowing Moscow to balance between the two and to continue its extensive and lucrative weapons-development partnership with India—but if China is too overbearing, then Russian efforts to continue to develop the BRICS into a more-effective counterweight to the G-7 and to diminish enthusiasm in India for pushing ahead with closer relations with Washington (even given the U.S. sporadic attention to India during the Obama administration) will falter.

Finally, a fifth priority is to get the entire Eurasian integration project back on track. The Ukraine intervention and Russia’s economic woes did much to damage the attractiveness of the Eurasian Union. Moscow will now need to convince key regional leaders—starting with Kazakhstan’s Nursultan Nazarbayev—that the “alternate” EU remains a good deal and has legs.

Russia closed out 2014 boxed in by Western sanctions and its own economic crisis. It needs to regain its freedom of movement in 2015 by limiting the damage in its Western vectors, push ahead with its Eurasian dream and strengthen its Asian options. The APEC summit in Beijing and the G-20 summit in Australia this past fall showed that Putin is under pressure, but not completely isolated and not without options. If the Obama administration intends to continue its efforts in 2015 to make Putin more of a pariah on the international stage, it will need much-more-intensive efforts to reach out to a whole cadre of leaders—from Hollande to Shinzo Abe to Narendra Modi and Nazarbayev—to make Washington’s case. It will also have to decide how much to invest in the success of Poroshenko’s government in Ukraine—and balance desired outcomes with achievable objectives. But the most critical point is this: Washington cannot sit back and assume that the problems of the Russian economy will decrease Russian activity on the global stage.