2016: The Year of Vengeance and Uncertainty 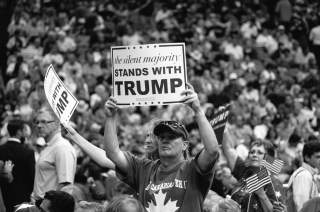 In 1916, the Battle of the Somme, the most lethal clash between Allied and German forces during the First World War, killed more than 300,000 in only four months. Two years later, 1918 brought with it the worst flu pandemic in world history, which sent to their graves between 3 and 5 percent of the global population. The year 1968 would become shorthand for political turmoil, as Martin Luther King Jr. and Robert F. Kennedy were cut down by assassins, and the world gazed into the maw of violent revolution. And 1994 saw the slaughter of 800,000 Rwandans and the setting of scenery for the Bosnian Genocide that following year.

Yet it was 2016 that, as Charles Dickens wrote of 1775, “some of its noisiest authorities insisted on its being received, for good or for evil, in the superlative degree of comparison only.” Our most recent year was not the worst in history or even particularly bad, and no number of Facebook statuses transmitted from their authors' climate-controlled apartments via phones that have more computing power than Apollo 11 off of space satellites and onto the greatest repository of information that’s ever existed should convince us otherwise. The world, despite the horrors of the Syrian Civil War and the wannabe menace of petro-state plutocrats like Vladimir Putin, is as safe a place as it’s ever been, and while the election of Donald Trump might be a buffeting event, our republic has weathered far worse.

But just because 2016 wasn’t the secular end times doesn’t mean that it didn’t leave a mark and perhaps an indelible one. The reason that 1968 ended up being 1968 was because the seeds of unrest had been planted a decade earlier, during the 1950s, remembered for their post-war profits and progress, but actually something more spectral than that. The journalist I.F. Stone characterized the fifties as “haunted,” by the looming Soviet menace abroad, by the fatuous duck-and-crouch drills in anticipation of a nuclear attack at home, by straitjacketing social conformity, by the unease that prosperity couldn’t possibly last and another depression beckoned ahead with bony finger.

Likewise, if you go by cherry-picked statistics, Barack Obama’s presidency seems equally charmed. Economic growth was consistent, unemployment plummeted, crime was relatively rare and American troops returned home after a decade of exhausting war. Yet a good number of phantoms lurked beneath. The supposedly roaring economy has left behind a healthy chunk of the middle class. Workers have found themselves stranded between an increasingly gaunt manufacturing sector and newer high-tech industries for which they don’t have the training. Heroin has emerged from the inner cities and ravaged previously idyllic communities. Terrorism is on the rise in Europe thanks to the low-tech depravity of Islamic State.

All this has led to a sense of national anxiety, whether manifested in the recent alarming spike in suicides or the hefty majority of Americans who say the country is headed in the wrong direction. Obama’s presidency, like Eisenhower’s and Kennedy’s, has been haunted, a reality his political party has chosen to ignore, consoling themselves with deceptive data and consequently mounting a presidential campaign that promised little more than headway down our unacceptable current path. It was Donald Trump who harnessed this stress and promised to relieve it with ease—all you had to do was elect him and America would be made great again. Anyone paying attention to our anxious zeitgeist knew that Trump had a chance at winning; in retrospect, his victory should have been obvious from the moment his elevator crash-landed into the presidential race. Trump promised, loudly and forcefully, to exorcise our demons, which was precisely what we wanted to hear.

So 2016 was a haunted year. But it was also a transition point, when the early 2010s erupted into something more vengeful and uncertain, when the ghosts escaped their prison and began flitting about. Their target was the social forces bequeathed to us by the sixties: cultural liberalism, economic individualism, activist government, increasingly distant concentrations of power, multiculturalism and its resultant mass immigration and political correctness, all of which were seen as complicit in an untenable status quo. We are living through a counterrevolution against that revolution, more fulsome than the backlash of Richard Nixon’s Silent Majority. Our political elites, gazing abroad at Russian scapegoats and the mirages of the Trans-Pacific Partnership, never noticed the problems brewing at home, and for that they’ve been swept aside in favor of a president-elect who claims (speciously) to be their greatest tormentor. They whimper now that America is “looking inwards,” to which many voters respond: “Well, it’s about time!”

I am not convinced that the counterreaction of 2016 will be anywhere near as refurbishing of American society as were the 1960s. The revolutionaries of that time were young, with many decades ahead of them to implement the changes they sought, while few Millennials would count themselves among the counterrevolutionaries of today. But there’s little question that we have just experienced a purgative year, one whose tremors have been felt well beyond our borders. It may be that, like Pandora, we’ve unwittingly unleashed forces we can’t hope to lid in time, or it may be that we’ve embarked on a necessary course correction. Either way, we live in interesting, though not end, times.