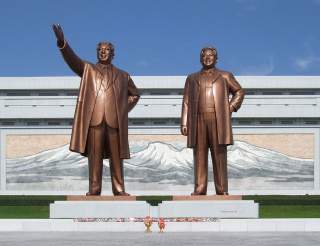 As 2017 breaks, South Korea faces a potentially turbulent year. Confronting Orwellian North Korea, South Korea is uniquely dependent on an American security guarantee, and Donald Trump—who some would argue could make matters worse—is about to take over the U.S. side of managing that alliance. Simultaneously, the current South Korean president has been partially impeached. She may well be out of office in the next few months, sparking a new election shortly afterward. The current president is a conservative, which will likely empower the Left in the next election and, therefore, a significant foreign-policy shift on North Korea. Finally, North Korea has just suggested it may test an intercontinental ballistic missile, which Trump has threatened to prevent.

Is Trump Vested in Korean Security?

Not since President Jimmy Carter in the late 1970s has an American major party candidate called into question the United States’ commitment to South Korea as much as Trump has. During the campaign, he repeatedly suggested that South Korea, among other allies, should pay more for the United States’ defense guarantee. He hinted that it (and Japan) should consider building nuclear weapons instead of relying on the United States. And he suggested off-the-cuff that he might meet with North Korean leader Kim Jong-un.

This obviously flies in the face of decades of U.S. policy. The United States has generally treated North Korea since its inception as an errant part of a Seoul-led unified Korea, rather than as a genuinely independent state. (This is why North Korean media so incessantly invokes the North’s sovereignty: the leading state in the system rejects that.) That North Korea morphed into the world’s most servile personality cult only alienated the United States further. President George W. Bush placed it on the Axis of Evil, and the United States has led the sanctions charge as its nuclearization has proceeded.

In this context, the United States has traditionally opposed Southern nuclearization as a signal to the North and China of benign U.S. intentions. And the United States has withheld high-level meetings with the Pyongyang elite as a prize for major Northern concessions. That Trump so blithely seemed to throw all this out on the campaign trail with off-the-cuff remarks and tweets shocked the South Korean establishment, which broadly wanted and expected Hillary Clinton to win. It is no surprise that the first phone call to Trump after his victory came from the South Korean president, looking for assurances.

If the policy confusion that Trump may unleash were not enough, the next leader of South Korea may very well be a dove, dramatically altering the hawkish approach of the last decade to North Korea. Current president Park Geun-hye has been impeached by the South Korean legislature, the National Assembly. That vote must now be confirmed (or thrown out) by the nation’s high court, the Constitutional Court. Those deliberations are ongoing, but there is a general sense here that the court will uphold the conviction. The National Assembly vote was very disproportionate—236 to 54—in favor of impeachment, and weekly rallies since October have sent millions of Koreans into the streets demanding Park’s ouster.

A confirmatory verdict would force a new election within sixty days. Park is a conservative, and the scandal around her has badly tarnished the right-wing party, which is breaking up over the impeachment fight. Much as the U.S. Democrats won a “wave election” after Watergate, the South Korean Left is expected to do the same here. Even if Park hangs on, the next scheduled election is in December, which the Left would also likely take.

Importantly, all the likely candidates of the Left are broadly committed to the “Sunshine Policy” of engagement and accommodation with North Korea. All are also much more skeptical of the United States and Japan. (The South Korean Left often argues that the United States has worsened North Korea by confronting it, while Japan, the erstwhile colonialist of Korea, should be antagonized over its behavior in the occupation.)

This would be a major U-turn. Since 2008, South Korea’s presidents have been conservatives and North Korea hawks. Since 2010, when North Korea’s worst provocations in years killed fifty South Koreans, there has been a broad consensus in the South Korean and U.S. defense establishments to get tough with Pyongyang. This has been the context for regularly thickening UN sanctions, the closure of the Kaesong Industrial Complex, the installation of the U.S. missile defense (Terminal High Altitude Area Defense) and intelligence sharing with Japan about North Korea (General Security of Military Information Agreement). The liberal candidates have threatened to roll back all these changes.

Has Trump Set a Red Line on a North Korean ICBM?

The background to these shifts in Seoul and Washington is the spiraling North Korean nuclear program. After five nuclear tests, it is now clear that Pyongyang can build a basic fission weapon, and its constant missile tests aim to give it a reliable delivery vehicle. After Kim Jong-un’s offhand ICBM comment in his New Year’s address, Trump set up a possible showdown by seemingly laying down a red line against it.

If this were not complicated enough, the interaction of these threads could be downright combustible. I find it difficult, for example, to picture cordial relations between a mildly anti-American South Korean president from the left and the flamboyant nationalist Trump. A falling out could widen alliance differences to levels not seen since the second Bush administration. Or perhaps North Korea follows through on its launch threat, and the Trump administration shoots down the rocket (as the Wall Street Journal is already suggesting). Might Trump, sensitive to allied free-riding, demand that South Korea pay for that effort, and missile defense generally? (South Korea is not currently scheduled to pay for the THAAD deployment in its country.) It is easy to foresee a prickly South Korean nationalist from the left rejecting that.

All in all, Trump, a leftish South Korean president and North Korean missiles stirred together should make the peninsula’s year a helluva tangle.

Robert Kelly (@Robert_E_Kelly) is an associate professor of international relations in the Department of Political Science at Pusan National University. More of his writing may be found at his website.