The 2018 Midterms: A Chance to Restore America’s Global Reputation? 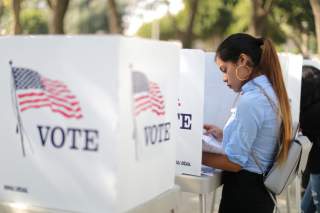 President Donald Trump is deeply unpopular among most of America’s friends and allies. On November 6, skeptics abroad will watch closely as U.S. voters go to the polls in the midterm elections. Two years after Trump’s shock elevation to the White House, what proportion of Americans have swung behind the president’s agenda? Will the electorate choose lawmakers bound to support Trump’s leadership at home even if it means the steady erosion of U.S. power and influence abroad? Or are the opponents of Trump strong enough to take back power in Washington and begin the process of rebuilding confidence in America’s world role?

Foreign and domestic detractors of President Trump will be hoping for a big Democratic victory in the midterms. From this view, a strong showing for the Democrats would confirm suspicions that Trump is an aberration—someone who won the presidency via a quirk of the Electoral College, who remains out of step with mainstream public opinion, and whose brand of “America First” nationalism stands little chance of outlasting his years in the Oval Office. It would be a powerful signal that a more internationalist America is alive and well and that an organized political force stands ready to defeat Trumpism in 2020.

But if the Democrats win control of the House as seems probable (retaking the Senate will be much more difficult), it will not necessarily presage a return to liberal internationalist orthodoxies. Even an unexpectedly large surge in support for the Democrats should not be construed as a repudiation of Trump’s foreign policies, still less an endorsement of the liberal internationalist policies that came before. This is because the Democratic legislators who take their seats in January 2019 will not have won by campaigning on foreign-policy issues. And while some of them may choose to oppose Trump on foreign policy, they are unlikely to do so uniformly.

To be sure, leading Democrats have been eager to criticize Trump for his rejection of multilateral institutions, typified by his withdrawal from the Paris Climate Agreement and the Iran nuclear deal. They sorely want to repair relations with allies like Germany, whose leader Angela Merkel suggested last year that Europeans could no longer “rely on” America. Moreover, most Democratic lawmakers can be counted on to oppose Trump’s militarist and unilateralist tendencies.

But the Democratic Party is not committed to a restoration of the status quo ante when it comes to foreign policy. Take the issue of free trade, for example. While some Democrats might now be making political hay out of Trump’s unpopular tariffs and trade wars, others in the party have a recent history of opposing trade liberalization. Certainly, Democrats in Congress—from Bernie Sanders and Elizabeth Warren to Nancy Pelosi—were not eager supporters of President Obama’s efforts to expand foreign trade. Instead, they fought hard to oppose the Trans-Pacific Partnership and other similar free-trade agreements.

It is not that the Democrat left is anti-internationalist. In Sander’s major foreign-policy speech in September, he explicitly rejected Trump’s nationalistic worldview and offered a spirited defense of the notion that interdependence requires multilateral solutions to common challenges. But Sanders wants to implement a version of internationalism that would require drastic changes to U.S. foreign policy. He and his followers demand a radical, progressive, and values-driven international agenda in place of the comparatively conservative goal of stewarding the existing international order. For them, global leadership is not an end to be desired in its own right.

Trump and Sanders differ greatly, but both realize that the social contract that previously underpinned American internationalism is no more. Strong and credible alliances; support for multilateral institutions; broad commitment to an open international economy; military actions in the name of preserving global stability—these pillars of the international order were long-regarded as extensions of a supposed U.S. national interest. But today, fewer Americans recognize the connection between an expansive foreign policy and expanded opportunities at home. From both right and left, there is an apparent appetite for something different even if there is no consensus on precisely what the future should look like.

Dissatisfaction with America’s relationship with the outside world predated President Trump, of course. Deep economic integration, seemingly never-ending wars, immigration and multiculturalism, and the pooling of national sovereignty have always had their discontents. But the 2016 election made it clear that addressing the “disconnect” between America’s elites and the broader electorate can go unaddressed no longer. In Trump, voters chose a president who explicitly promised to tear down the liberal internationalist architecture that leaders from both parties had helped put in place over seven decades. Now, the only way out is through.

Overseas believers in the liberal world order are right to hope for a “blue wave” in 2018. Under Trump, the Republican Party has all but lost any serious claim to the internationalist mantle. But it would be wrong to hope that U.S. global leadership can be restored by anything as simple as Democratic victories in 2018 and 2020. If America is to regain its lost international leadership role, a new and inclusive social compact will be needed to connect U.S. global power with concrete advances in homeland security, domestic prosperity, and national pride. In other words, an activist foreign policy must become a clear-cut “valence issue” once more—something that most voters and leaders from both political parties can agree upon.

As of 2018, such an agreement on national purpose seems like a distant prospect indeed. Bipartisan support for U.S. internationalism is not something that the Democrats can manufacture alone. In time, the Republican Party must also be convinced to reject Trumpism and rediscover the merits free trade, credible alliances, and multilateral cooperation. Furthermore, in any case, even the Democrats are divided on how to approach the question of international leadership. They will remain so for the foreseeable future.

Ultimately, the United States stands no chance of regaining its position as a more-or-less legitimate leader of the international community unless enough domestic actors—voters, organized interests, political parties and national leaders—lend their support to such a project. It is quite possible that they will not, and that the country will instead embark upon a path of abdication, unilateralism, retrenchment or paralytic ambivalence. After just two years of the Trump presidency, it is still far too early to tell which way things will go.