3 Myths About China and the South Sea Tribunal Verdict 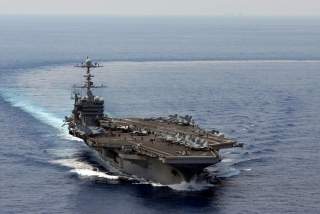 The Permanent Court of Arbitration (PCA) in The Hague issued its award on Tuesday in the case Philippines v. China. The tribunal ruled entirely in the Philippines’ favor. Ecstatic Washington, DC foreign-policy elites have since done nothing but revel. But their three most frequent claims—that China should submit to the decision, that the United States should pressure China to do so, and that by rejecting international law China is threatening international order—do not hold water. Instead, the United States has the China it deserves. Read on to exit their echo chamber.

Does China Have Any Way to Gracefully Submit to the Decision?

According to Sen. Marco Rubio’s post-ruling press release, “Beijing faces a choice: accept the tribunal’s ruling or through its response, rally the entire region against its provocative actions.” Is this actually China’s choice?

No. Accepting the ruling is not even an option for China, because to do so would surrender its claim to be a great power. Great powers don’t recognize the jurisdiction of others in respect to their vital interests. They don’t ask for permission to ensure their security. And they don’t surrender their basic territorial claims in response to being rapped on the shoulder.

Furthermore, accepting the ruling would create a precedent whereby any state in a dispute with China could internationalize the disagreement to get its way. There is already talk of Vietnam following in the Philippines’ footsteps; a favorable ruling in such a second case could essentially lock China out of the South China Sea in terms of resource exploitation and maritime administration.

Finally, there’s the issue of domestic legitimacy for both President Xi and the Chinese leadership. Backing down after so explicitly rejecting the tribunal’s jurisdiction would cause President Xi and the Chinese Communist Party to lose face. Chinese nationalists, who are already being censored en masse on Weibo, would be outraged, and the party would diminish its legitimacy in the eyes of the nation. This would be seen as a national humiliation: the same sort of humiliation that led to revolution in China just over a century ago.

Would “Stiffer” American Resolve Make China Comply with the Ruling?

According to Gordon Chang (of Perpetually-Coming-Collapse-of-China fame) China has violated international law because in the past “countries shied away from holding China accountable.” The solution is obvious: with “extraordinary economic pressure” “impose costs” and shun China. That is the best that can be done in the short term. In the long term, he says, we need to have “a conversation” about more serious measures.

By getting tough with China most analysts mean something along the lines of Michael Mazza’s recent proposal: strengthening America’s forward posture by basing Navy and Air Force assets at Philippine and Vietnamese ports and bases in addition to those already in Singapore, Japan and South Korea. Mazza imagines a future in which there is a “persistent American military presence at the eastern, southern and western points of the compass” in the South China Sea, restricting China to the shallow northern bits. This is in addition, of course, to the host of other proposals for more freedom of navigation operations, increased reconnaissance flights off Hainan Island, bigger arms sales to any state that will oppose China, more “lawfare,” amped-up anti-China rhetoric, increased economic relations with anyone but China and sanctions on certain Chinese industries. Would getting tough with China force it to comply?

No. Intense U.S. pressure is not going to force China to fold and go home. It is likely to do the opposite: to lead to a regional escalation. What would this look like? We have dealt with this question in more detail elsewhere, but heightened tensions would likely result in intensified nationalism that would undermine regional harmony, an increasing risk for inadvertent conflict in the South China Sea, the jeopardization of a potential Philippines-China bilateral agreement and, contrary to Mazza’s expectations, the further division of the region’s states, particularly Taiwan, which supports China’s claims.

Does China’s Rejection of the Tribunal’s Decision Herald the Failure Of “Socialization” into the International Order?

According to Rep. Randy Forbes, China, which subscribes to “the ‘might-makes-right’ school of international politics,” has “undertaken a systematic campaign” to undermine international order—“peaceful resolution of disputes, adherence to international laws and norms” and the rejection of the “use of coercive force to achieve national objectives”—and in so doing China threatens “international order itself.” Is this true?

No. In fact, ignoring the Hague ruling would indicate that China has been socialized into the American order—indeed, socialized so successfully that it has begun mimicking U.S. behavior towards international law. Rules are for little people, or so America’s record indicates. When other states were committing to the Covenant of the League of Nations following the Paris Peace Conference, the United States abstained despite the covenant’s Wilsonian ideals. The United States ensured that the architecture of the U.N. system prevents the United States (and other great powers) from being forced by the institution to act contrary to their will. The United States has not submitted itself to the maritime jurisdiction of UNCLOS or the Permanent Court of Arbitration that just ruled against China. It is true that the U.S. government proclaims its adherence to UNCLOS. However, the reason Congress has refused to ratify the treaty is precisely so that the United States does not end up in the sort of embarrassing situation China found itself on Tuesday. PACOM Commander Harry Harris is right: “In the 21st century our moral standing is affected by the fact that we are not a signatory to UNCLOS.”

In that sense, China’s mistake was not ignoring the tribunal’s decision but ratifying UNCLOS in the first place. IR scholar Shirley Scott explained the logic of this position a decade ago: “The realist aim in relation to international judicial proceedings would be to be able to take another state to a form of dispute resolution as a means of exerting influence over its actions and policies but to be much less accountable oneself.” This is precisely what the United States has managed to do: to bind others by a law it is unwilling to bind itself by.

This brings us to the pious bromides of Rep. Randy Forbes. He can talk about the “peaceful resolution of disputes, adherence to international law and norms” and the rejection of the “use of coercive force to achieve national objectives” all day long, but he cannot change the fact that he voted for the single action that has done the most to destroy world order and undermine international law in our century: the invasion of Iraq. The invasion was illegal, it was unjust, it was foolish and it wrecked the Middle East. If Forbes really wants to keep score, the United States is still miles ahead of China when it comes to ignoring international law and undermining global order (even though, unlike China, the United States actually took part in constructing that order).

Just because the United States sometimes violates international law, of course, does not mean it rejects it altogether. But China should be judged by the same standard. Refusing to recognize the ruling of the PCA does not mean China has rejected international order; it simply indicates China is asserting the same “great-power privilege” that the United States has long practiced. American angst comes not from China’s supposed rejection of international order, but its assertion of equality with the “unipolar power.”

We have argued that China does not have any pathway to gracefully accept the PCA ruling, that the United States will not be able to force it to accept it, and that, contrary to the echo chamber of the DC establishment, China has not rejected international order but simply treated it like the United States does—in this sense, America has the great-power China it deserves.

All this being said, we do believe there is a potentially realistic, peaceful and constructive path forward in the South China Sea. All three of these adjectives matter. First, realistically, China will need to make a move to preserve its prestige and demonstrate its strength. Issuing an ADIZ in the South China Sea—as so many have speculated China could do—would be an entirely legal and basically non-escalatory way for China to save face domestically. Second, in order to keep the peace and prevent escalation, the United States should follow Bill Hayton’s advice and do and say nothing that would cause China national humiliation. At the same time, the Philippines and China should work out a bilateral arrangement that benefits both parties. President Duterte of the Philippines has already made suggestions in this direction, and his foreign minister has struck a conciliatory tone (indeed, so much so that it has even led to some criticism in the Philippines). Finally, the outcome of these events could be constructive if the bilateral deal were to become the basis for future negotiations with other claimants.

Jared McKinney is a Non-Resident Junior Fellow at the Center for the National Interest and a double degree Msc. candidate at Peking University (School of International Studies) and the London School of Economics and Political Science (Department of International History). Nicholas Butts is an incoming Crown Prince Frederik Fellow at Harvard University, John F. Kennedy School of Government. He is a double degree candidate in International Affairs at the London School of Economics and Political Science and Peking University, where he was awarded the National Southwest Associated University Guocai Scholarship Prize (西南联大国采). Nicholas is a Pacific Forum CSIS Young Leader. Follow him on Twitter at @Nicholas_Butts.