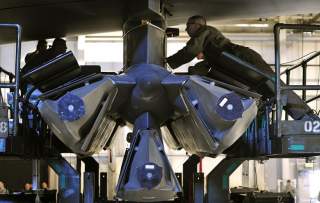 The United States is set to spend over $1 trillion on its nuclear weapons over the next thirty years. That is no trivial sum. To place it in context, that amounts to 77 percent of the national student debt, which hovers around $1.3 trillion.

Part of the reason for this massive spending spree stems from necessity. Our current nuclear weapons systems are ageing and becoming obsolete. But rather than tailoring the next generation of nuclear deterrence to geopolitical realities, the United States is replacing its massive nuclear arsenal on a one-for-one basis as if the Cold War never ended.

These plans are excessive, destabilizing and threaten the national security of the United States. And all of them will be locked in and set in motion before the next president has been elected or has had any time to consider what the best strategy is under a new administration. Any economist will tell you that this in no way to plan ahead.

Luckily the nuclear piggy bank is overstuffed and ripe for a withdrawal.

Before he leaves office, President Obama should place an immediate spending freeze on the most redundant and excessive nuclear modernization programs already underway. These include the new Intercontinental Ballistic Missile (ICBM), the Long-Range Standoff weapon (LRSO) and the B61-12 gravity bomb. Doing so would give the next president the flexibility to make common-sense reductions that would save billions of dollars while presenting a leaner and more efficient fighting force.

The Bomb That Costs More Than Its Weight in Gold

The B61-12 gravity bomb is a prime example of a zombie program that has taken on a life of its own. Of the 480 gravity bombs the United States is planning on fielding, 180 will be deployed in Europe as part of a tactical-nuclear sharing agreement with NATO. The problem is that these weapons are practically useless.

A recent RAND report found the deterrent value of European tactical nuclear weapons to be close to zero as it would seem “highly unlikely to Moscow that the United States would be willing to exchange New York for Riga.” Coupled with the unwillingness of European member states to see their countries turned into a nuclear battlefield, “this lack of believability makes this alternative both unlikely and unpalatable.”

The seven-hundred-pound B61-12 bombs will end up costing approximately $28 million a piece. That is more than 1.5 times what they would cost if the bombs were made of solid gold. In total the programmatic costs will total about $10 billion. A lot of that money can be saved by making sensible cuts. Recent analysis from the Stimson Center found that withdrawing the B61-12 from Europe entirely and retaining the U.S.-based bombs would result in $3.7 billion in savings between 2017 and 2021. Over the lifetime of the program, that figure would rise to more than $6.2 billion.

The Destabilizing and Redundant Cruise Missile

The Air-Launched Cruise Missile (ALCM) is another weapons system that has outlived its relevance; its next generation, the LRSO, should be suspended immediately. The current version of the ALCM, the AGM-86, was built in the 1980s when the United States thought it needed overwhelming numbers of nuclear cruise missiles to overcome Soviet air defenses and compensate for its conventional inferiority in Europe.

That is no longer the case. The United States now has total military dominance on the global stage and outspends Russia on defense by ten to one. We also field sophisticated stealth bombers and have just spent billions purchasing conventional cruise missiles that can take on the same missions envisioned for the LRSO. In the extreme circumstance where nuclear weapons must be used, there are plenty of other weapons in America’s nuclear arsenal.

Even former secretary of defense William J. Perry, who earned the nickname “ALCM Bill” for his role in creating the weapon system, thinks that replacing it is a terrible idea. He and his colleague, former assistant secretary of defense Andy Weber, argue that nuclear cruise missiles are dangerous and “uniquely destabilizing” weapons. Because they come in conventional and nuclear variants, an enemy would have no way of knowing if they were under conventional or nuclear attack. This could easily lead to a miscalculation that could trigger a nuclear war.

This dangerous and redundant weapon comes at a steep price. The LRSO will end up costing taxpayers an estimated $30 billion to research, develop and to enter into service. Only a fraction of those funds has been spent to date and by freezing the program in its tracks tens of billions of dollars can be saved for the next administration's initiatives.

Perhaps the greatest excess in the nuclear arsenal is in the land-based leg of the triad. The Air Force spends billions of dollars maintaining four hundred Intercontinental Ballistic Missiles that have little to no strategic value. Because they are highly vulnerable to enemy attack, ICBMs can realistically only be used as a first-strike weapon in a surprise attack on an unsuspecting adversary.

The vulnerability of ICBMs also creates an extremely dangerous “use them or lose them” environment, which has prompted America to adopt a policy known as launch-on-warning. On more than one occasion, that policy has come dangerously close to initiating an accidental nuclear launch.

Regardless, the Air Force is planning to replace the current ICBM with an entirely new missile based in existing silo infrastructure. Initially, the Air Force claimed it could do so for $62.3 billion. That figure just went up to $85 billion after the Pentagon suspended work on the program last week due to “concerns the service underestimated the cost by billions of dollars.” That estimate is still a far cry from the $125 billion that a 2014 RAND report predicted the program would cost, and the Air Force has offered no explanation for why its numbers are significantly lower.

This is a program that is all pain and no gain. By putting the brakes on it, President Obama can set the stage for the next president to cut the program entirely, saving up to $120 billion over the next thirty years.

Suspending these three programs alone could shave $150 billion off the price tag of the nuclear-weapons budget. Further reductions could be made without sacrificing the immense destructive power of America’s nuclear arsenal. By modifying outdated Cold War patrol requirements and building ten Columbia-class nuclear submarines instead of twelve, the Navy could save $27.6 billion over the next twenty-four years. Given the years of service left in our existing bombers, the Air Force can safely delay the timeline of the B-21 long-range bomber until at least 2025, which the Congressional Budget Office has estimated will result in ten-year savings of $34 billion. These steps increase the grand total to more than $210 billion in potential savings.

“Spending on nuclear weapons squanders the wealth of nations,” Pope Francis recently wrote in a message to the 2015 Vienna Conference on the Humanitarian Impact of Nuclear Weapons.

To prioritize such spending is a mistake and a misallocation of resources which would be far better invested in the areas of integral human development, education, health and the fight against extreme poverty. When these resources are squandered, the poor and the weak living on the margins of society pay the price.

Making these common sense reductions would be a small step towards rectifying this injustice. It would also be the best investment the United States has made since the beginning of the Cold War. The 1,550 deployed nuclear warheads the United States currently fields under New START is far higher than is needed to deter a nuclear attack. President Obama admitted as much in 2013 when he asserted that that the United States could meet its national- and international-security requirements by reducing its arsenal by an additional third. Doing so would reduce the statistical probability of a catastrophic accident and free up valuable resources to invest in the economic growth of America.

Will Saetren is the author of Ghosts of the Cold War: Rethinking the Need for a New Cruise Missile and an alumnus of the Roger L. Hale Fellowship at Ploughshares Fund.

Image: Loading an AGM-86 ALCM on a B-52 Stratofortress at Minot Air Force Base. Wikimedia Commons/U.S. Air Force