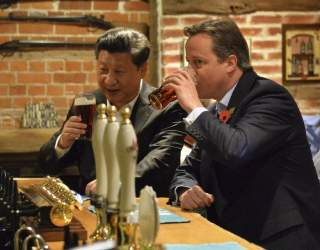 No doubt, the United States stands to lose a great deal from a Brexit. In recent months, countless commentators, as well as the Obama administration, have emphatically made this point. But few analysts have noted that the same holds true for China. Britain’s departure from the EU would be a costly economic and political blow to China, which worries Beijing. Thus, China has quietly but firmly opposed a Brexit, a message which President Xi Jinping personally delivered during his October 2015 visit to the UK. During the visit, in an unprecedented break with its official policy of noninterference in other countries’ domestic affairs, Beijing also issued a statement declaring that “China hopes to see a prosperous Europe and a united EU.” The message is clear.

But why is China so deeply concerned by the prospect of Brexit? To answer this question, it is crucial to understand why China puts such great importance on its relations with the UK. There are three reasons.

First and foremost, Beijing hopes to use its increasingly close relationship with Britain to influence the EU’s China policy. Faced with pressure from the United States and Japan in Asia, China has increasingly turned toward the EU to pursue economic opportunities, a turn that has been one of the chief drivers behind Beijing’s One Belt, One Road strategy. Against this background, China has cultivated an increasingly close political and economic relationship with Britain, with the hopes of building up the UK as its chief partner and advocate within the EU. China’s leadership has made special efforts to woo the UK’s ruling Conservative Party, which is staunchly protrade, especially Chancellor of the Exchequer George Osborne, a potential successor to Prime Minister David Cameron.

This strategy has already begun to bear fruit on two key issues. In spite of serious domestic and international opposition, the British government has lobbied the EU to grant China Market Economy Status, which would allow Beijing to reduce the serious threat of having antidumping duties imposed on Chinese goods. London has also publicly advocated a multibillion-dollar EU-China free-trade deal, which Beijing sees as a unique opportunity to greatly expand its gigantic trade and investment relationship with Europe. From China’s perspective,an added benefit of such a free-trade deal, would be to make the U.S.-backed transatlantic trade and investment partnership more difficult. A UK vote to leave the union would deliver a severe blow to Beijing’s plans of influencing the EU with Britain’s help. It would also weaken the EU as a potential economic and political partner for China.

Second, Britain gives China vital access to the gigantic but hard-to-penetrate European market. Many Chinese companies have invested in the relatively liberal British economy as a stepping stone to penetrating the heavily regulated EU market of more than 500 million potential customers. Such strategic investment has become even more relevant in recent years, as Chinese companies have begun to move up the value chain, particularly in services, and have faced restrictions on investing in other major economies, such as the United States, on security and technology-transfer grounds. Naturally, a Brexit would sever China’s access to the EU market through Britain. Wang Jianlin, the founder of the multibillion-dollar real estate and entertainment group Dalian Wanda, and a major Chinese investor in Britain, warns that “Brexit would not be a smart choice for the UK, as it would create more obstacles and challenges for investors.” Even more ominously, he predicts that in case of Brexit “many Chinese companies would consider moving their European headquarters to other countries.” According to insiders, Chinese companies have already put on hold business deals in the UK and are nervously awaiting the outcome of the referendum.

Third, London occupies a crucial place in China’s strategy for internationalizing the yuan. As the world’s leading financial hub, situated inside the EU and in a time zone that covers the East Asian, European and American markets, London provides the perfect springboard for promoting the yuan outside of Asia. Here it is critical to understand that the internationalization of the yuan is a key goal for China’s government. It would allow Beijing to issue debt in yuan, generate finance-driven growth, wean itself off its dependence on foreign currencies and prove that the yuan is a stable, free-floating currency with which other countries can settle their transactions with China. More fundamentally, the internationalization of the yuan would enable China to become one of the shapers of world finance and a true great power, because as Nobel Prize–winning economist Robert Mundell once noted, “great powers have great currencies.” Hence, the choice of London as the center of the yuan internationalization strategy is of such importance to China.

The first signs that this strategy is working are already visible. After witnessing consistent increases in yuan transactions in recent years, London has now become the second-largest center for yuan trading after Hong Kong, while Beijing’s currency marketplace system, a subsidiary of the China’s Central Bank, just announced that it plans to open a branch in London. If Britain leaves the EU, it is uncertain whether London would remain a good vehicle for China’s international yuan ambitions and its related plans to play a greater role in the world of high finance. In particular, London’s key role as the financial services center of Europe that offers “passporting,” which allows any UK-based (and regulated) financial firm to operate and open branches in all EU members without further registration, would suffer a huge blow.

Beyond these larger, strategic reasons, China is also concerned with the immediate effects a Brexit would have on the EU, its largest trading partner, with which Beijing exchanged more than 520 billion euros in goods and services in 2015. A British departure from the union would have a serious impact on the EU and the world economy, and might dampen the global growth outlook for the next year or two. For export-oriented China, which already faces an economic slowdown, such a scenario would pose a challenge.

On a more personal level, China’s leaders are simply baffled by the Brexit referendum. They find it difficult to understand how David Cameron is ready to gamble so much on an unpredictable, and most likely irreversible, referendum. The always pragmatic Chinese leadership is also shocked, according to China expert Kerry Brown, that Britain might choose to turn its back on the economic and political benefits that a great international network like the EU offers, over abstract ideals of absolute sovereignty.

In sum, a Brexit would be a disaster for China, with substantial strategic and economic consequences. Hence, as Britain’s referendum on EU membership, scheduled for June 23, approaches, China’s leaders are holding their breath. And with good reason; the stakes for Beijing are indeed high.

Ivan Lidarev is a PhD student at King’s College London and an advisor at Bulgaria’s National Assembly. Ivan’s research, published in the Diplomat, China Brief and Eurasia Review, among other publications, focuses on the international relations and security of Asia. All opinions expressed in this article are his own.