3 Steps to Address the Growth of European Populism 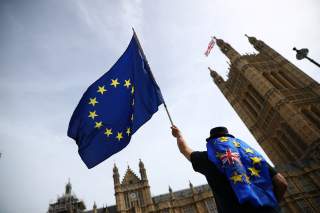 Post–Cold War Europe has relationship problems. After the fall of the Wall, Central Europe began a furious courtship of the West.

At first, all went well. But over time, states from the Baltic to the Adriatic found themselves increasingly criticized by the West—over everything from energy to immigration. “Why can’t you be more European?” the West complained.

Central European populists objected, only to find themselves then accused of insubordination and condemned as rejecting European values in pursuit of illiberal democracy. Relations strain further.

As of yet, nobody is interested in divorce, but all this bickering won’t make Europe better. And it can even make for trouble in the broader transatlantic family.

There’s much at stake here for America. Peace, stability and prosperity in Europe are a vital interest of ours. Amidst Europe’s familial squabbling, the United States has a role to play: that of peacemaker.

An Age of Angry

If frustration is the father of anger, Europeans have cause to be angry with each other. Those who have long dreamed of creating a European super state expected to be more than halfway there by now. But the European Project got hit with more hammer blows than Manny Pacquiao. The “Eurozone Crisis,” Russia’s invasion of Ukraine, Brexit, and the European migration crisis—all struck the continent like successive waves of a Viking invasion.

Meanwhile, the force tying together the transatlantic community experienced a mighty disturbance: Donald Trump. His election victory unsettled U.S.-Euro relations in multiple ways. Some on the continent feared the United States would become isolationist. Others saw in Trump a threat to the international order. In calling out NATO partners for inadequate defense spending, dumping the Iran Deal and “coddling” Putin, Trump ushered in a season of transatlantic discontent.

Concern peaked after the U.S. president’s summer whirlwind European trip that garnered hysterical headlines. “If you’ve grown up in the benign shadow of the transatlantic alliance, and viewed this partnership as a pillar of global peace and prosperity, these are strange times indeed,” wrote David Ignatius in the New York Times, “[I]t took seven decades to build this structure, but the wrecking ball that is the Trump presidency is assaulting it, piece by piece.” Ignatius’s hand-wringing was repeated by many.

It is hard to deny Trump’s travesty of a trip. On the other hand, it was fatuous to suggest his press conference with Putin marked the end the transatlantic alliance as we know it. The president’s style may have been unconventional, but the substance was not. At the time, I noted that none of Mr. Trump’s public statements compromised or weakened the U.S. stance on any substantive issue. The follow-up to the trip reinforced that assessment, as the United States reaffirmed its commitments to NATO, its support for the Ukraine, and its rejection of Russia’s seizure of the Crimea.

Still, it is not all about Trump. Europeans are equally apoplectic about the concomitant rise of populist movements that reject views held by Brussels’ elite. There was one body blow after another: the British voting to leaving the EU; populist election victories in Italy and Austria, and pushback from several Central European countries such as Poland, the Czech Republic and Hungary. The elite response has been to accuse the populists of authoritarian tendencies and rejecting the European values they pledged to uphold when they joined the union.

The confrontation continues to escalate. In 2017, the EU threatened to punish Poland, the Czech Republic and Hungary for refusing to take refugees and migrants under the scheme adopted by the EU Commission in 2015. Earlier this year the Commission threatened proceedings under Article 7 of the EU charter to punish Poland over changes in the country’s judicial system.

And, the populists aren’t backing down. Some, arguing that the European project is a betrayal of sovereignty, pressing for a European future that is not built on real “European values.” That was the message of a declaration issued last year in Paris by a group of conservative scholars. This year, in a fiery July speech, Hungarian prime minister Victor Orban blasted the European commission, saying it “was not a friend of freedom because it was working towards building European socialism instead of freedom.” Around the same time, Prime Minister Sebastian Kurz initiated Austria’s term in the EU presidency with a declaration that he would work for “a Europe that Protects,” signaling unhappiness with European policies concerning illegal migration.

Europe’s age of anger is an admixture of reasonable disagreements, zealots talking past each other, and mirror imaging.

Without question, immigration and refugee policy is the bellwether issue roiling Europe right now. That has led many to frame the divide as a war against liberalism and illiberalism, enlightened tolerance and humanitarianism vs. narrow-minded authoritarianism and xenophobia. In turn, that has sparked a spiral of name-calling, accusing political opponents of endorsing the worst kinds of evil from Europe’s past that produced the worst kinds of outcomes.

Fundamentally, however, the tearing at the center is not about the banality of evil. Political opponents shouldn’t be labeled like the darkest enemy just because name calling makes it easier to hate them. Demonizing should be saved for real demons: Nazism, fascism, communism, racism, violent extremism, terrorism, Islamism and anti-Semitism. Some of these malevolent forces lurk in corners on both sides of the Atlantic. We can reject them and their true-believers without rejecting one another.

And while immigration and refugee policy is the debate de jour, it is just today’s headline. The real complaint against the European project is two-fold: it entails too much regulation, and nations do not want to relinquish their sovereignty. The immigration issue is just the most glaring, painful example of where these two concerns hit home.

Europe will enter the post–anger age when both sides acknowledge that what they really need is an honest debate over the future of governance.

The time for the post–anger age could be fast approaching. Next May, the EU member states will elect over seven hundred members to the European Parliament. There is a high expectation that the non-traditional nationalist parties could win more than their share. A rise in Eurosceptic power could mean it is time drop derision and pick up dialogue instead. Europeans may find the only effective way to move a European agenda forward is to reach a common agenda—and that can only happen by engaging and working together.

America is no disinterested observer of European goings-on. The United States needs a strong, confident Europe. The challenge, of course, is that the United States is preoccupied with serious partisan squabbling of its own. Rather than regard Europe’s political differences as surrogates in the war between the Trumpers and the anti-Trumpers, Americans should seek an armistice on European affairs, helping to make the transatlantic dialogue less toxic. Here are some steps the new world could take in engaging the old.

Step 1: Don’t try to dismantle the European Union. For the most part, European populists are not out deconstruct the European project. Brexit made sense for Great Britain, particularly from an economic standpoint. It can allow the British could forge more flexible and innovative global economic relationships outside the strictures of the European Commission. But that doesn’t mean dozens of others will follow suit.

Some populists, like Austria’s Kurz, have argued for compromise with London to avoid a “hard Brexit.” But Austria isn’t interested in leaving the EU. Having worked so hard to get a union, even hardline populist governments think the value of staying in outweighs the value of getting out. What the populists want is an EU that gets back to basics and stops trying to act like a super-state.

In the end, some other European members may decide to leave the union. And that’s fine. It is their choice and their responsibility to do what’s best for their people. Still other nations may join the EU. The EU should stand or fall on how well it serves its members states. The role of Americans as responsible trans-atlanticists is not to tell Europeans how to organize Europe.

Step 2: Do not think all European populists are the same. Americans have a hard enough time understanding our conservative movement and what binds us together. The European conservative movement is even more diverse—united only in its interest to seek less mothering from Brussels. That’s why Steve Bannon’s project to unite European nationalists probably won’t get far: it’s like trying to unite competing soccer teams who have little in common other than that they all play soccer.

Americans have to stop treating European populism like the identical twin of their caricature of American populists. European nationalist movements represent a diverse consortium.

European conservatives want to protect the foundations of national freedoms, yet still promote the notion of a peaceful, prosperous European community. Their internal debates reflect the real tensions in European thought.