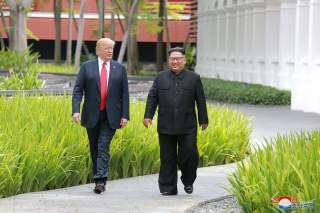 It’s official: after a ninety-minute meeting in the Oval Office last Friday between North Korean Vice Chairman Kim Yong-chol and President Donald Trump, followed by a lunch with Secretary of State Mike Pompeo, Washington and Pyongyang have announced their intentions for a second summit. In about a month, President Trump and North Korean leader Kim Jong-un could be posing for photographs in Vietnam and taking another garden stroll for the television cameras. You can call it the Trump-Kim sequel, the second-act to the ominous first chapter.

Whether the second will be any more productive than the first, however, is very much an open question. The South Korean government of President Moon Jae-in, whose miracle diplomacy has provided both Koreas with at least a slim opportunity to bury the hatchet after sixty-nine years of violent rivalry, is certainly anticipating that Trump and Kim will find it within themselves to strike an agreement that is…well…an actual agreement. The lack of substance from the Singapore summit last June, after which Trump and Kim flew back to their respective capitals with an extremely vague, non-enforceable list of promises in their suit pockets, has deflated much of the optimism in many Washington circles for what can be achieved during a second meeting. Notwithstanding Trump’s assurances to the American people that negotiations with the North are going quite well—“We have made a lot of progress as far as denuclearization is concerned and we’re talking about a lot of different things,” Trump told reporters last weekend—there haven’t been many substantive breakthroughs on the nuclear file as of yet.

While much of Washington is skeptical, if not outright cynical, about another Trump-Kim summit, all hope isn’t lost. There are simple, common-sense proposals the Trump administration can consider to minimize the risks of failure and bolster the chances of success.

1. Connect the summit to a process

One of the biggest complaints in the seven months since the Singapore summit has been the lack of an actual process at the working level. So far, discussions between Washington and Pyongyang have largely been driven by the principals. Trump and Kim have kept this entire process alive. The diplomatic momentum is directly connected to the ability and willingness of Trump and Kim to keep the momentum going. As far as we can tell from the outside, talks below Secretary Pompeo are meager. Indeed, it took U.S. special envoy Stephen Biegun five months before he even conversed with his North Korean counterpart, an exchange that finally happened on Saturday outside of Stockholm, Sweden.

As Van Jackson, a senior lecturer at Victoria University of Wellington in New Zealand and author of On the Brink told me over Twitter, “I #fellinlove with diplomacy a long time ago. Big fan. But the summit is not that, and it’s--ironically--allowing Kim to avoid [negotiating]. Why? Because it’s unconnected to process, or to people who know things about monitoring, verification, and dismantlement. That makes it a show.”

The lesson: unless the next summit is attached to a formal process whereby U.S. and North Korean negotiators further down the chain-of-command are empowered by their superiors to actually get into the nitty-gritty, nuts-and-bolts details of nuclear verification and dismantlement, we could be in for an anti-climatic repeat of Singapore.

Diplomacy is the art of the possible. Two sides sit down in a room, put their cards on the table, and try to arrive at some kind of mutually-acceptable arrangement that meets the bottom-line demands of both sides. Successful diplomacy is at times historic and underwhelming all at the same time; unless your sparring partner is completely incompetent, no country will get everything it wants (Republicans and Democrats would be smart to remember this as the government shutdown continues to churn without resolution, but that’s another story).

Right now, the Trump administration continues to take a hard-line. The White House is demanding that North Korea take concrete and verifiable nuclear disarmament steps on the front-end without any commensurate diplomatic or economic concessions in return. In other words, if, and only if, Pyongyang travels down the irreversible road of denuclearization will it receive a whiff of sanctions relief. In essence, Washington is taking a Boltonesque approach to the entire nuclear negotiation: give me what I want, and maybe I’ll return the favor later.

Kim will not be interested in that approach. And why would he? Indeed, if the North Koreans adopted the same negotiating strategy as the Americans are adopting today, the White House would justifiably dismiss Pyongyang’s conduct as insincere, irrational grandstanding. In his past life as a real-estate magnate, Trump wouldn’t be caught dead giving anything up for free during one of his branding or building deals, so why would he expect Kim to do so—particularly when the topic concerned is North Korea’s nuclear weapons arsenal, a deterrent Pyongyang has spent over three decades cultivating?

If Washington refuses to accept a step-by-step implementation mechanism, a summit meeting will be dead in the water.

3. Don’t go for the grand deal

Trump has a flair for the dramatic. He would love nothing more than to emerge from the room with Kim at his side, declaring that North Korea agreed to destroy every last warhead in its stockpile and open up every single facility to international inspection and control. Needless to say, this scenario is not going to happen. Trump would be making a strategic mistake if he tried to swing for the fences the moment Air Force One lands in Vietnam.

If the president asks for too much, too quickly or tries and fails to enact the big deal, he will come away from the experience angry and humiliated. Who knows—perhaps he will begin to reevaluate the last year of letter writing with Kim and wonder whether the “fire and fury” rhetoric of 2017 was the right posture all along. Negotiating with the North will be as time-consuming and risky as open-heart surgery. One wrong move could kill the patient.

Instead of going for broke, it’s far more advisable for Trump to press Kim to add more meat on their skeletal June 12 Singapore statement. What does Pyongyang explicitly mean by denuclearization of the Korean Peninsula? What does the United States have in mind
when it talks about sanctions relief? What would a peace regime on the Korean Peninsula hypothetically look like? What deliverables can Washington and Pyongyang make over the short-term in order to keep the negotiations alive? According to Devin Stewart, the
Asia program director at the Carnegie Council, Trump and Kim need to play small-ball. “For the next summit, Trump and Kim just need one small “win” for their domestic audiences to maintain momentum,” Stewart told me.

Anything more than that may be too heavy and could split the pillars of a shaky negotiating foundation.