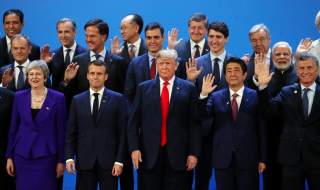 The much-anticipated bilateral session between President Donald Trump and Chinese president Xi Jinping at the G20 meeting in Buenos Aires has created a rather unique situation. There appears to be more attention to that “sideline” encounter than to the G20 event itself. The prevailing assumption is that the bilateral encounter is more significant, and may represent the last opportunity to head off a full-blown trade war between the United States and China that threatens to derail the global economy.

There is no question that the trade issue is important, and that both countries have engaged in dangerous posturing by implementing escalating rounds of tariffs. However, there are two problems with focusing so heavily on the trade issue as the central topic for discussion between the two leaders. First, the bilateral economic relationship is extremely complex, involving not only obvious issues such as tariffs, but related matters including China’s currency policies and Beijing’s stance regarding intellectual property rights. Although a summit meeting might result in modest progress on such differences, a true breakthrough on those issues is unlikely from a single meeting, no matter how high level. Observers may be investing too much hope in the outcome of the summit despite the growing trade confrontation between the two economic giants.

Second, the trade issue (and even the broader economic relationship) is not the only worrisome source of trouble in the bilateral relationship. The two leaders need to address their differences on at least three important security matters: North Korea, the South China Sea and Taiwan. Trends on all three topics are increasingly troubling, if not alarming.

The widespread optimism that prevailed following President Trump’s June 2018 summit with North Korean leader Kim Jong-un in Singapore has faded markedly. Washington still insists that North Korea must embrace complete denuclearization as the outcome of the diplomatic process. A growing number of experts in the United States and elsewhere conclude that such an objective is unrealistic, and that if Washington clings to that position, a peaceful solution is not possible. Trump and Xi should have a candid discussion about how to avoid such a disastrous impasse.

The United States needs to exhibit more realism about the denuclearization issue and display a greater willingness to proceed toward more limited goals, such as negotiating a peace treaty formally ending the Korean War, establishing diplomatic relations with Pyongyang and extending the informal mutual moratorium on North Korean nuclear and missile tests and U.S.-South Korean military exercises. China needs to make clear what measures it is willing to take to leash its North Korean client if America pursues such conciliatory initiatives. Beyond that step, Xi’s government needs to clarify what role China is prepared to play in promoting long-term stability on the Korean Peninsula. The meeting in Buenos Aires offers an important opportunity to take the first steps in addressing those crucial issues.

North Korea might prove to be a difficult topic, but China and the United States at least profess to share the same basic goals. The status of the South China Sea is more contentious. China seems determined to establish itself as the dominant power in that important body of water. The breadth of its long-standing territorial claims is something Washington is not prepared to accept. Beijing’s continuing effort to build artificial islands, some with military airstrips, is calculated not only to enhance those claims but to boost Chinese military power in the area. Washington’s answer is an ostentatious naval presence through larger and more frequent “freedom of navigation” patrols. Chinese leaders regard that policy as disrespectful at best, and menacing at worst.

Both sides need to refrain from belligerent rhetoric and provocative gestures. The United States can demonstrate its stance with smaller and less frequent naval deployments. Unless Beijing attempts to disrupt commerce through the South China Sea—an action that would be suicidal given China’s own dependence on an unimpeded flow of its own exports—it does not pose a serious threat that Washington must counter. A greater effort by Beijing to move its dialogue forward with Vietnam, Malaysia, the Philippines and other competing territorial claimants would significantly dampen tensions. Such steps should be a priority topic of discussion at the Buenos Aires summit.

Finally, the most troublesome and dangerous issue looming in the next few years in the U.S.-China relationship is the status of Taiwan. Recent trends regarding that issue have been especially worrisome, and a candid dialogue between Trump and Xi is urgent. China and the United States appear to be on a diplomatic collision course regarding Taiwan.

When Taiwanese voters elected Tsai Ing-wen of the pro-independence Democratic Progressive Party as president in January 2016, Beijing moved to adopt an aggressive strategy of diplomatic strangulation with respect to the recalcitrant island. During Tsai’s tenure, five of the twenty-two countries (mostly small, poor nations in Africa and Latin America) that still recognized the Republic of China (Taiwan’s official name) when she took office have switched ties to Beijing.

Although the PRC’s strategy appears to be achieving its primary objective, it may well come at an unacceptably high price. American supporters of Taiwan are pushing back firmly, and they are moving to increase Washington’s support of the island’s de facto independence. Two incidents that accompanied Beijing’s “success” in inducing El Salvador, the latest target, to sever diplomatic ties with Taipei, underscore the danger.

The U.S. State Department’s official statement warned that the United States was “deeply disappointed” by El Salvador’s decision. That stance was surprisingly negative, especially since the United States itself has not maintained official diplomatic relations with Taipei for nearly four decades. At a minimum, the Trump administration’s response raised doubts about a continuing U.S. commitment to the one-China policy.

Matters soon escalated when Senator Cory Gardner (R-CO), chairman of the Senate Foreign Relations Committee’s Asia subcommittee, and several bipartisan co-sponsors, including Marco Rubio (R-FL) and Ed Markey (D-MA), introduced a measure to pressure countries to stick with Taipei diplomatically. Among other things, the legislation authorized the State Department to downgrade relations or alter foreign assistance programs to discourage countries from making any decisions deemed adverse to Taiwan. “The Taipei Act of 2018 would give greater tools and directions to the State Department in making sure we are as strong a voice as possible for Taiwan,” Gardner told Reuters.

Even before the pushback regarding El Salvador’s diplomatic defection, there were multiple signs of a hardening U.S. policy in response to Beijing’s growing pressure on Taiwan. And as Gardner’s initiative confirmed, support for that course is broadly bipartisan. A major step occurred in March 2018 when President Trump signed into law the Taiwan Travel Act, which encouraged “officials at all levels of the United States Government” to visit and meet with their Taiwan counterparts and to “allow high-level officials of Taiwan” to enter the United States and to meet with their U.S. counterparts. That legislation was passed by both houses of Congress overwhelmingly. It ended Washington’s practice of authorizing meetings only with relatively low-level Taiwanese officials. That original protocol had been adopted when the United States recognized the People’s Republic in 1979. It was especially noticeable that the new law specifically promoted interaction by “cabinet-level national security officials.”

In early July, the Pentagon sent two U.S. warships through the Taiwan Strait, the first such passage in more than a year, to display support for Taipei. That move occurred on the heels of a State Department request that the Defense Department send a small contingent of Marines to guard the American Institute in Taiwan (Washington’s de facto embassy in Taipei). The United States also invited two senior Taiwanese military officials to participate in a May ceremony at the U.S. Pacific Command.

The emergence of more hardline positions regarding Taiwan by both China and the United States is ominous. Such a diplomatic collision course could even escalate to a military collision course, with disastrous consequences for both countries and the global economy.

Trade issues deserve to be a high priority for the Trump-Xi meeting, especially given the tensions resulting from the dueling tariffs in recent months. But the mounting problems in the security relationship, although they may have received less attention in the global media, also must be addressed. Those dangerous problems will not get better if they are allowed to fester.

Ted Galen Carpenter, a senior fellow in defense and foreign policy studies at the Cato Institute and a contributing editor at The National Interest, is the author of 12 books and more than 700 articles on international affairs.