3 Ways that North Korea Could Strike Back at America 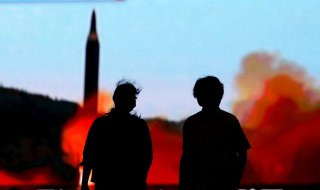 North Korea’s nuclear strike capability has likely crossed a point of no return. The Defense Intelligence Agency estimates that Pyongyang can fit nuclear warheads on long-range missiles that can reach U.S. territory, and that the Kim regime may possess up to sixty nuclear weapons, which reifies the alternative pathways for North Korean policy.

The first and most probable pathway is a further intensification of protracted tension in the form of a Cold War.

Verbal volleys are being exchanged rapidly. President Donald Trump was swift to follow up the alarming intelligence report with an equally menacing statement of his own. Threats from Kim, promised President Trump, would be “met with fire and fury like the world has never seen.” Meanwhile, Kim has said he might strike the U.S. territory of Guam from which strategic bombers have conducted missions on the peninsula. Then, on Thursday, Secretary of Defense James Mattis echoed the president’s warning in a written statement in which he said North Korea must “stand down its pursuit of nuclear weapons.”

The vow surpasses the harshest rhetoric employed by previous administrations seeking to dissuade Pyongyang from further provocations. While Sen. John McCain is right to worry that making empty threats can embolden an adversary, President Trump does not appear on the verge of ordering a surgical strike against North Korean nuclear and missile sites.

In fact, Secretary of State Rex Tillerson has said that there is no tectonic shift in the security situation. A Cold War already has been in place for decades and now it continues—albeit in a state of heightened tension.

One suspects that the reason for the leaked intelligence report is likely to stay ahead of future North Korean surprises, thereby reducing the psychological advantage of, say, rolling out a nuclear-tipped ICBM. Further, the rationale for harsh warnings is to make sure China understands the risks of inaction.

But brinkmanship can escalate abruptly, leaders can miscalculate, and attempts to show resolve and strength can be misread and spiral out of control. Hence, a second pathway could be a sudden lurch into war.

At least some informed observers think Kim or Trump might do the unthinkable and initiate offensive action. Certainly, now any skirmish on the Northern Limit Line or the Demilitarized Zone could threaten to escalate with a nuclear missile strike on Guam or the continental United States. Although we can take solace in the fact that no nuclear-armed states have ever used their most destructive weapons against each other, they have fought proxy wars and engaged in lower-level violence and subversion.

If outright war remains a possibility but not a probability, then long-term tensions and Cold War may eventually yield to greater diplomacy. Thus, a third pathway forward might see the gradual emergence of an arms control regime and a diplomatic peace framework. The post–World War II East-West contest gave way to arms control agreements and détente. Just as nuclear fears in the past two decades led to the Agreed Framework, Six Party Talks and the Sunshine policy, the mounting hazards may steer all powers toward dialogue.

Clearly, the current U.S.-led policy approach aims to use pressure and engagement to rebuild the basis for diplomacy. We can expect the United States and its allies, South Korea and Japan, to continue to pursue a dual-track policy of defense, sanctions and pressure. Additionally, allies will diplomacy and engagement, on the other hand. This is a logical continuation of longstanding carrot-and-stick approaches adopted by previous U.S. administrations.

The Trump administration is pursuing this incentive-and-disincentive policy with more vigor than its predecessors. Threats of secondary sanctions on Chinese entities and fiery rhetoric are both designed to catalyze China into joining the right cause. Washington is pressuring Beijing to lean much harder on Pyongyang, and President Trump wants China to worry about the consequences of not doing more to rein in Kim’s nuclear and missile programs.

Unfortunately, China is unlikely to do enough and we should not expect North Korea to back down from wanting to field ICBMs and other nuclear-armed missiles. The security objectives of Pyongyang (a nuclear-armed state) and Washington (a denuclearized Korean Peninsula) are diametrically opposed and leave little middle ground for compromise. This puts the United States and the region in a more precarious—if manageable—situation.

The Korean Peninsula has been a dangerous flashpoint ever since the war resulted in an armistice just over sixty-four years ago. North Korea’s latest achievements in weapons of mass destruction make the situation even more dangerous and yet, as with the past, manageable. We have reached a culminating point, and we should brace ourselves for a new level of permanent crisis even if hot war never breaks out.