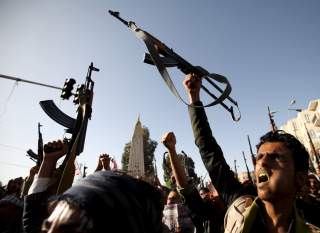 Iran is the big winner of the Middle East turmoil of recent years, commonly called “the Arab Spring.” While Russia succeeded to achieve its aims in Syria by helping to preserve the Assad regime and, in fact, became the key broker of the post–Syrian War settlement, Iran made major gains in four Arab countries: Iraq, Yemen, Lebanon and Syria.

Some blame the Obama administration and its supposed soft-line policy in the region for these Iranian gains. While signing (together with other five powers) a nuclear accord with Iran, curbing its nuclear program, critics argue that the administration didn’t insist on halting Iran’s aggression in the Middle East. The Obama policy might not have stopped Iranian incursions into the Arab world. But the fundamental reasons for Iran’s rise as the leading regional power are closely related to developments in the four Arab countries. In each of these countries Iran’s rivals played inadvertently a key role in strengthening the Iranian position through the transborder Shiite connection. In other words, each external intervention unintentionally strengthened the pro-Iranian Shiite group in each of the four Arab countries. In some of the cases, though not in all of them, the outcome was influenced by nationalist opposition to foreign intervention. In all four cases, however, the interventions reinforce the regional transnational sectarian connection, which makes possible the fulfillment of Iranian aspirations to become the leading regional force.

How have these four intervening powers made Iran the winner of the Middle Eastern game (at least for now)?

Israel is a key enemy of the Islamic Revolutionary regime. Yet, Israel helped unintentionally to produce the first case of an Arab country moving to Tehran’s sphere of influence. This happened in Lebanon, where the 1982 Israeli invasion and the occupation of South Lebanon until May 2000 inadvertently reinforced the Iranian influence. The unintended outcome was the rise of an Iranian-supported Shiite guerrilla organization—Hezbollah. The movement, which developed both powerful military and political branches, was inspired by the Shiite-led Islamic revolution in Iran. Yet, the fight against the foreign Israeli occupation also mobilized growing support among the largest sect in Lebanon—the Shiites—who became more and more alienated from the Israeli control. Over the years, the result was the emergence of a powerful Iranian proxy in the politically fragmented Lebanon with its sectarian polarization. Such a powerful force guarantees major Iranian influence in Lebanon even if resented—to different degrees—by some of the non-Shiite sects in the country. Thus, a key enemy of Israel has gained a major foothold next to its northern border, triggering a violent conflict in 2006 and a never-ending potential for a major escalation. Moreover, the struggle against Israel has provided Hezbollah an ongoing source of legitimacy for bearing arms, and directing a state within the Lebanese state.

A second case Is Iraq. Here another enemy of the Islamic Revolution brought about inadvertently Iranian dominance in a country which used to be a major rival of Iran. In this case the U.S. played the key role in producing the conditions for the rising Iranian influence. Following the 2003 occupation of Iraq, the Americans tried to democratize the country. Yet, elections in an ethnically fragmented state like Iraq mean that the largest ethnic—or sectarian—group is going to win. The Shiite are the majority group in a polarized Iraq and some of their leaders are allies of the Iranian Shiite regime. This transborder connection has guaranteed major Iranian influence in Iraq. Thus, the US invasion and the American democratization project brought to power in Iraq forces allied with its key enemy in the region—even if the alliance with Iran is not welcomed by all Iraqis, including some Shiites.

The third case of an external intervention that helped to grow Iranian influence is more recent—Syria. Here the key intervention is by a country that is not currently an enemy of Iran—Russia, but historically this was the case for a very long time and the future of their alliance is quite uncertain. At any rate, the Russian bombing since the fall of 2015 played a key role in bringing about the victory of the Assad regime in the Syrian civil war. This is so even though Iran, Hezbollah and various Iranian-led Shiite militias started to fight alongside the regime much earlier—well before the Russian bombing began. Similar to the other cases, the support of Iran and its Shiite allies for the Alawite regime in Damascus is also based at least partly on a common sectarian affiliation as the Alawites are considered to be an off-shoot of the Shia sect of Islam. The dependence of the Assad regime on the support of Iranian/Shiite militias seems to guarantee a major influence for Teheran in Syria. While the Russian bombing was crucial, the Iranians and their allies provided the ground forces necessary to preserve the regime. Thus, Israel, particularly, is worried that the debt of the regime for the Iranian support will be translated to continuous Iranian—and Hezbollah—military presence in the country, not very far from the border with the Israeli-controlled Golan Heights. Recent Russian statements seem to indicate their acceptance of such a military presence—even if with some very limited distance from the Golan. This forward military deployment of Iran and its allies creates the potential for an escalation, whether intended or inadvertent.

Finally, there is the ongoing case of Yemen. The war is continuing there—with a huge misery for the civilian population—so we can’t be sure about the outcome. But at least one thing is clear: the persistent bombing by the Saudi-led Sunni coalition did not succeed to remove from power the Shiite-affiliated Houthis who still control a considerable part of Yemen. Moreover, this Sunni military campaign against them reinforces the Houthi alliance with Iran and probably alienates a large section of the Yemeni population from the Saudis and their Sunni allies, thus creating another bastion of Iranian influence in the Arab world. In this case the stronghold is adjacent to the border with the leading opponent of Iran in the Arab world—Saudi-Arabia. This situation also produces a potential for an escalation in which the Iranian-Saudi cold war will be translated into a hot war.

The continuous instability and polarization in the Middle East raises some doubts about the future of the Iranian rise in the region. Still, the developments of the last few decades, especially recently, culminating with the American intervention in Iraq and the consequences of the Arab Spring, seem to result in major Iranian achievements irrespective of the nuclear issue. The causes of these gains in the four countries discussed here are, first, the sectarian divisions in the region, particularly the transborder Shiite connection and, second, the effects of the external interventions. In most cases these effects are unintended based on the nationalist/sectarian resentment of the external intervening force. In the Syrian case, however, the outcome thus far reflects the military victory of the intervening forces. In all four cases, however, Iran is the regional power that has gained the most. This poses a major challenge to Saudi Arabia and its Sunni allies and also to Israel. This is the main reason for the recent rapprochement between the Saudis and Israelis, manifested among other things, in the recent—and unprecedented—interview of the Israeli chief of staff to a Saudi news outlet. In the interview, Lt. Gen. Gadi Eisenkot highlights the shared perception of the Iranian threat by both Israel and Saudi-Arabia and the willingness to share intelligence with the Saudis. Such recent developments might suggest a major realignment in the Middle East—with far-reaching implications for both war and peace in the region.

For war, the key implication is a rising likelihood of a confrontation between Israel and the Iranian allies in Syria and Lebanon, notably Hezbollah, although mutual deterrence is likely to reduce the probability of an actual fighting.

For peace, the emerging Israeli-Saudi/Sunni alliance based on the “enemy of my enemy is my friend” creates a potential for progress in the Israeli-Palestinian peace process. But in this context, there is a crucial role for the Trump administration, which maintains good relations with both Israel and the Saudis. This is a key challenge for the administration, which thus far, apart from harsh rhetoric, has essentially continued the disengagement from the Middle East. This challenge is likely to intensify with the destruction of the Islamic state in Syria and Iraq. The new developments in the Israeli-Sunni relations create a great opportunity for the administration and it might be tempted to take advantage of it in order to show some accomplishments in foreign policy, which have been quite rare thus far.

Benjamin Miller is a professor of International Relations at the School of Political Sciences, the University of Haifa. Among his publications: When Opponents Cooperate: Great Power Conflict and Collaboration in World Politics (University of Michigan Press, 2nd/paperback ed., 2002); States, Nations and Great Powers: The Sources of Regional War and Peace (Cambridge University Press, 2007); and International and Regional Security: The Causes of War and Peace (Routledge, 2017).