4 Reasons Why Trump's Latest Travel Ban Order Is a Winner 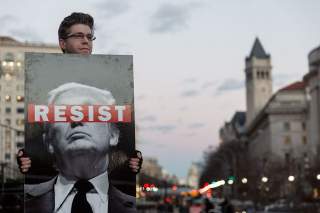 When the Ninth U.S. Circuit Court of Appeals upheld the nationwide stay against President Donald Trump’s travel ban executive order last month, it was a defeat for the White House on policy grounds and an international embarrassment for a young administration that looked as if it didn’t know what it was doing. The circuit court judges all stated that Trump’s national-security basis for stopping travel to the United States from the seven countries included in the executive order was bogus. Indeed, for the court, the Department of Justice provided zero evidence to demonstrate why a visa and refugee suspension was a valid response to a critical national-security threat to America.

The White House, angry, defiant and a little shaken, was forced to go back to the drawing board and try to salvage the original order with various revisions so that the president could keep one of his most explicit campaign promises: to put in place a system of “extreme vetting” that would identify foreigners traveling to the United States with malicious intent.

The administration’s new executive order, released today, goes a very long way in addressing some of the issues that the judges had with the original order. The Department of Justice will have a much easier time defending the order from any legal challenges that arise from civil-liberties and immigration-advocacy groups.

1. The new order is far more substantive in explaining why a temporary suspension of visas from Iran, Somalia, Syria, Sudan, Yemen and Libya is necessary in order to defend the homeland from people who could be using the applicant process for nefarious purposes. Several paragraphs are devoted to explaining the administration’s reasoning as to why a suspension is required for the six specific countries and why the six countries were singled out for special scrutiny. Additionally, the White House included in the order Department of State terrorism data as a means of assuring people that interagency evidence was used to support the ninety-day suspension of new visas, not conjecture or suspicion alone. Insofar as one of the reasons for why the Ninth Circuit wasn’t willing to give the administration the benefit of the doubt on national-security grounds, the administration has heeded the court’s warning.

2. Iraq is no longer included on the list of countries that necessitate a ninety-day suspension of new entries into the United States. While this will have little legal benefit for the Department of Justice attorneys tasked with defending the order from a court challenge, the exception holds tremendous benefits from the standpoint of diplomacy.

To many Iraqis fighting hard on the front lines, their country’s inclusion for special scrutiny by the Trump administration was a betrayal of a high order and was understandably perceived as a slap in the face to all of the sacrifice that Iraqis have made against the Islamic State over the past three years. Iraq’s placement on the list of seven nations also put Iraqi prime minister Haider al-Abadi in a very tough position; less than a week after the Trump administration’s first travel ban was released, the Iraqi parliament pushed through a vote asking al-Abadi to reciprocate with identical measures against Americans seeking entry into Iraq. It was a distraction at a time when Iraqi security forces were preparing for an offensive into Mosul’s western districts—a battle guaranteed to produce significant casualties in the ranks of Iraq’s army, counterterrorism forces and police.

As the latest order acknowledged, Iraq is a special counterterrorism partner that has committed enormous military and financial resources to the fight and therefore merits special treatment from Washington, DC. Iraqi forces “have fought to regain more than half of the territory previously dominated by ISIS have shown steadfast determination and earned enduring respect as they battle an armed group that is the common enemy of Iraq and the United States,” the order states. By recognizing the sacrifices on the ground by Iraqi security forces and essentially codifying that belief within the executive order, the White House has avoided a counterproductive diplomatic headache.

3. In contrast to the first travel ban order that was rushed by White House senior policy adviser Stephen Miller—a process that was kept in close confinement from other departments—the second iteration appears to have undergone the interagency review that is standard operating procedure for executive orders and presidential directives of immense policy significance. Iraq was removed from the travel ban as a direct result of an intervention by Secretary of State Rex Tillerson, who played troubleshooter with the Iraqis and reportedly partnered with Defense Secretary James Mattis to lobby on behalf of Iraq’s removal.

The new order provides for a greater amount of exceptions and waivers during implementation. Foreign nationals who already have a valid U.S. visa by the time the executive order was signed will be permitted entry into the United States. Green-card holders are excluded entirely. Dual nationals of one of the six countries will be allowed in “when the individual is traveling on a passport issued by a non-designated country.” And any refugee that has been granted asylum won’t be affected by the new restrictions. The Secretary of Homeland Security also has more discretionary power to admit aliens on a case-by-case basis, particularly if the person seeking entry into the United States has already traveled into the United States in the past and has special work, education, family or business arrangements that require him or her to re-enter the United States. The Department of Homeland Security secretary can also admit individuals who need specialized medical care.

Many of these exceptions simply wouldn’t have been possible without a thorough interagency process. Unlike the first order, it seems as if Secretaries Mattis, Tillerson and John Kelly were afforded input before the order was cleared.

4. Minorities in each of the six countries are no longer given priority for admission into the United States. Instead, they will be treated like every other foreign national in Somalia, Syria, Sudan, Iran, Yemen and Libya. In other words, Christians residing in the designated countries will have to wait just as long as Muslims—and possibly longer if Washington isn’t satisfied with the security information that they have provided.

Although the Department of Homeland Security secretary could still accept refugees on his own discretion, religious identity (Christians in Syria or Yazidis in Iraq, for example) is no longer explicitly cited as a factor during those determinations. The religious discrimination argument that the American Civil Liberties Union employed successfully in multiple court challenges in January and February, therefore, will be less poignant.

Overall, the second version of the “Presidential Executive Order on Protecting the Nation from Foreign Terrorist Entry into the United States” is far and away a better product than the first. It’s more detailed, comprehensive and bureaucratically vetted than the original, which can only charitably be called a shoddy rush job. The lesson for the Trump administration is clear: on executive orders and policy rollouts, it’s smarter politically and substantively to take the time to get it right.