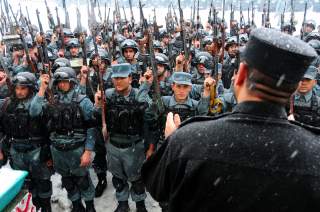 As the U.S. government considers whether to send more troops to Afghanistan, the real issue is what political outcome we’re plausibly trying to achieve? Military force is useful only as a means to achieve a political end.

Today, the Trump administration is debating whether to send four thousand additional troops to the country. Secretary of Defense Jim Mattis indicated to Congress that a new deployment would aim to bolster U.S. air-power capabilities and to strengthen the train, advise and assist mission. How realistic is that hope? In 2010 and 2011, the United States had one hundred thousands troops in the country. Led by able commanders such as Stanley McChrystal and David Petraeus, success proved elusive. Before we commit more blood and treasure to this conflict, the United States needs to ask hard questions. Jim Mattis earned high respect as a military commander. I express no opinion on military strategy. But a successful outcome to this conflict will turn on political dynamics.

Expanding the U.S. military presence makes sense only as part of a realistic political strategy that offers a plausible possibility of stabilizing Afghanistan and the region, and keeping both the Taliban and ISIS from winning. A Taliban victory is unacceptable. During the 1990s, it focused internally on Afghanistan.

Today’s Taliban holds expansionist ambitions. Victory in Afghanistan will turn its eyes towards nuclear-armed Pakistan in an effort to overthrow the Pakistani government. That would be difficult. As a nation, the Pakistanis are more hostile to violent religious extremism than outbursts of violence against its minorities might indicate. Still, the Taliban might succeed in destabilizing Pakistan and cause regional effects that harm U.S. security interests.

This much seems evident. President Ashraf Ghani is struggling to hold his nation together and the Afghan army is faring poorly. Currently, the Taliban claims it fully controls thirty-four of four hundred known districts, heavily contests another 167, and is competing in another fifty-two districts. Bill Roggio, editor of the Long War Journal, assesses that while the Taliban may exaggerate success, its latest claims match with press reporting. Nor are those claims far off from what the Special Inspector General for Afghanistan has reported. New outbreaks of fighting in Kunduz, once relatively unaffected by the conflict, and Taliban success in the country’s Badakhshan Province bordering Tajikistan border and in Balkh Province, raise new concerns.

The United States has spent countless dollars training the Afghan military. Afghan soldiers are rooted in a warrior culture, but the Afghan National Army has failed the hopes once held for it. Traditional resistance to a dysfunctional centralized government, widespread corruption and the abuses of the Afghan Local Police and pro-government militias have undercut the government. Pakistan’s covert support of the Taliban is merely one element of a difficult equation, but remains an obstruction to success.

What are the key elements to such an outcome?

First: Success starts with defining what is achievable. The government won’t win control over the entire country. It should assert control over areas that it can plausibly defend and block the Taliban from winning. Priority should go to major population centers. That goal needs to be communicated clearly to Afghans, the Taliban, Pakistan and regional neighbors. New U.S. support should aim to bolster the Afghan army and work to restore the stalemate that had been more or less achieved a year and a half ago. Some think success is a long shot. Convinced it has the momentum, the Taliban will balk at negotiations. Still, this approach may make a politically positive outcome plausible.

Second: Communicate forcefully in public that the United States will stand by the Strategic Partnership Agreement reached with the Afghan government to prevent a Taliban victory.

Third: The Afghan government must use the time that added U.S. support buys to create jobs for young people, reconcile the political class and help stabilize the economy.

Fourth: Use that political and military foundation to communicate that while the Taliban might not lose that war, it cannot win it. That is likely true as long as the international community supports the current government.

We must privately quash any expectation by the Afghans that the United States will stand by it should its government fail to make necessary reforms. Afghanistan needs a stable government that denies Foreign Terrorist Organizations a safe haven. U.S. leadership can make a difference in achieving a positive outcome. It should calibrate its military, political, diplomatic and economic efforts towards that achievement.

James P. Farwell has advised the U.S. Special Operations Command, is a nonresident senior fellow at the Middle East Institute in Washington and an associate fellow in the Department of War Studies, Kings College, University of London. He is the author of The Pakistan Cauldron and other books on national security. The opinions expressed are his own and not those of the U.S. government, its departments, agencies or combatant command.