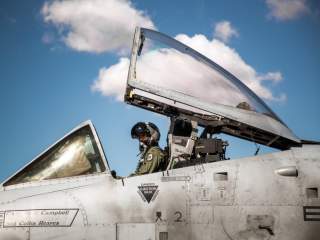 We’ve all seen the click-bait headlines.

“You won’t believe how much the U.S. spends on its military.”

“The U.S. spends more than the next 13 countries on defense!”

Next month, President Obama will propose his FY2017 budget, and the public debate over national security spending will be begin anew.

So, how much should the United States spend on national security? Spend too little and our adversaries may be emboldened to exploit weaknesses, costing American blood and treasure. Spend too much, and the misallocation of resources will add to the debt shouldered by future generations. It’s a difficult balance to strike.

But it’s vital that we get it right. Americans have every reason to be concerned about the state of the U.S. military. The most recent Index of U.S. Military Strength assessed the global threat level as “elevated” and America’s ability to defend itself and its interests as only “marginal.”

Given the stakes, we need to understand where arguments regarding national security spending fall short. Here are five common—but bad—arguments made by those seeking to cut the defense budget.

“The United States spends more than the next seven countries combined.”

Statistically true, but not particularly helpful. The United States also spends more on health care than the next nine countries combined. In 2012, Americans accounted for about one-third of the world’s total spending on entertainment. We’re a big, rich country—with a lot to protect and a host of vital interests around the globe.

More important is the trend in defense spending. The same data set that pegs U.S. spending at more than the next seven countries today shows that we spent more than the next thirteen countries combined in 2011. Our investment in national security compared with the rest of the world has dropped dramatically over the last four years.

Remember, robust defense funding serves a purpose. It allows the United States to preempt threats before they arrive at our shores. No other country is capable of protecting its interests around the world like the United States, and sustaining a military force that can project power worldwide comes at a cost.

“Defense spending has grown too much in recent years.”

Defense spending has grown since the 9/11 terror attacks—but not nearly as fast as the rest of the federal government. From 2001 through 2015, spending on social and economic programs dramatically outpaced spending on national security: 61 percent compared with 38 percent in inflation-adjusted dollars.

Defense Department outlays now account for only 15 percent of all federal spending—less than its share before 9/11. Add in state and local government spending, and national security accounts for only 10 percent of total public spending.

As a percentage of America’s gross domestic product, total national security spending has fallen from a high of 4.7 percent in 2010 and to an estimated 3.3 percent in 2015. (It stood at 2.9 percent in 2001.) So where’s that so-called ‘surge’ in defense spending?

“The national debt is the biggest security threat.”

The debt is a serious problem, indeed. But it is not a national security threat, nor does it mean that we must cut defense spending even more. The national debt is a different kind of threat.

The national debt is a significant drag on the economy and will make life much worse for future generations. But it will not launch nuclear missiles or suicide attacks. ISIS, Russia, China, Iran and North Korea do, however, pose real and potentially deadly threats—and those threats won’t become more manageable by directing spending away from national security.

Nor can we fix the debt problem simply by reducing our security spending. From 2009 through 2013, annual federal deficits exceeded the entire national security budget. The Office of Management and Budget predicts that Defense Department spending will decline from 15 percent of total federal spending to just 11.7 percent by 2020. That’s because spending on Social Security, health care and interest payments are soaring.

The Congressional Budget Office estimates that, left unchecked, spending on just those three programs will exceed federal revenues within 20 years. The only way to address the debt problem effectively is to reform our runaway entitlement programs.

“We have more aircraft carriers than the rest of the world combined.”

True, but no reason to cut military spending. The size of our military should be based on security needs, not simple inventory counts. As a global power with global interests, the United States  has historically sized its military to have the potential to fight two conflicts simultaneously. This ensures that if we are fighting one war, another adversary cannot take advantage of the situation to launch an attack elsewhere.

Today, the U.S. military is smaller than any time since 9/11. America’s Navy, for example, has shrunk 14 percent since then. With only 272 ships, it’s our smallest fleet since 1916.

This year the Army will fall below its 9/11 size. At its new end strength of 475,000 it  will be our smallest Army since 1940 with more cuts planned for future years. Our Air Force has 12 percent fewer personnel and 26 percent fewer aircraft than it did on 9/11.

“America is fighting terrorists in pickup trucks, not other nations.”

Unfortunately, the United States needs both to fight terrorists and to deter potential adversaries, such as Russia and China. Moscow’s invasions of Georgia and Crimea and the continued fighting in eastern Ukraine show that Russia is still a dangerous power. China is aggressively asserting authority over ever larger areas of the South China Sea. North Korea continues to expand its illegal nuclear bomb program while Iran advances its own ballistic missile program. The United States needs to deter these countries while supporting ongoing operations against terrorists.

The debate about the U.S. national security budget often devolves into issues that are not actually relevant to U.S. national security. Comparing U.S. fleet size or military budgets against those of other countries is an interesting analytical exercise, but not a rational basis for budget determinations. Many of these arguments do not make sense upon closer inspection.

Instead, the United States should build its national security budget based on a coherent strategy that realistically assesses the threats to the nation and its commitments and interests abroad.

Justin T. Johnson is Senior Policy Analyst for Defense Budgeting Policy in the Center for National Defense of the Kathryn and Shelby Cullom Davis Institute for National Security and Foreign Policy at The Heritage Foundation. This article is based on a longer report by the author.