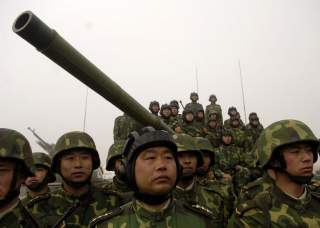 China’s transformation from an isolated, developing country into an economic juggernaut and emerging global actor is perhaps the most important power shift for twenty-first-century international politics. Its economy is now second largest in the world, while its military budget has ballooned from $20 billion in 1989 to $215 billion in 2015—an amount larger than the military budgets of Russia, Germany and the United Kingdom combined.

Fear surrounding the consequences of China’s rise has engendered the spread of misinformation and hyperbole, much of which dominates public discussion of China in the United States. Several persistent “myths” about China overshadow its many problems, including its deeply ingrained corruption, slowing economic growth and aging population.

These myths create an image of China as a dangerous usurper destined to displace the United States as the dominant global power. Breaking down the myths about Chinese power is critical to understanding China’s rise, its potential role in the international community and the evolving nature of U.S.-China relations.

Two decades of meteoric economic growth has enabled China’s leadership to embark on a multi-faced modernization of the People’s Liberation Army. From 1995 to 2015 China’s defense budget maintained, on average, double-digit growth. Stockholm International Peace Research Institute estimates China’s 2015 defense budget at $214 billion, second in the world only to the United States. China’s military spending constitutes 48 percent of the total spending of all the nations in Asia and Oceania combined.

Although increased spending has greatly enhanced China’s military capabilities, the nature of these enhancements reveals the limited reach of China’s military prowess. Superpowers must project power globally, but China’s capabilities remain bounded to East Asia. Its controversial island-building projects—and the airstrips and radar towers on those features—amplify Chinese power in the South China Sea, but are vulnerable to attack and offer diminishing returns for operations beyond the Nine-Dash Line. Similarly, China’s emerging anti-access/area denial capabilities and antiship technology could be used to counter the United States in a regional conflict, but are less effective beyond China’s immediate neighborhood.

Should the political will exist, China may eventually develop superpower capabilities. China’s first aircraft carrier, the Liaoning, was commissioned in 2012—but as a refitted Soviet carrier, it remains technologically limited. However, China has already begun the difficult process of developing an aircraft carrier built entirely with Chinese designs and technology. Indigenous defense development coupled with an expanding research and development/science and technology base offers Beijing a means to reduce China’s technology gap with the United States. Furthermore, while China currently lacks the basing agreements that enable the U.S. military to operate worldwide, it publicly announced construction on its first overseas “support facility” in Djibouti in February 2016.

There are other hurdles that China cannot overcome with money alone. China has not fought a war since 1979. Its military remains untested, and its officers lack combat experience comparable to their counterparts in the U.S. military. The recent reorganization of the PLA may exacerbate these issues in the short term as command hierarchies, especially with regard to command and control, are realigned. Considering these limitations, it could be decades before China possesses the capabilities to project military power on a global scale.

Myth #2: China's holdings of over $1 trillion in U.S. debt give it leverage over America.

The fear that China’s ownership of American debt affords it leverage over the U.S. economy is misplaced and overblown. The purchasing of sovereign debt by foreign countries is a normal transaction that helps maintain openness in the global economy.

Importantly, China is not alone in holding large amounts of American debt. U.S. debt is an in-demand asset. It is safe and convenient, and as the world’s reserve currency, the dollar is extensively used in international transactions. China tops the list of foreign holders of U.S. debt, owning $1,244.6 billion, but Japan is a close second, with $1,137.1 billion. The majority of U.S. debt, approximately 60 percent, is held by domestic financial actors and institutions in the United States.

Much of the apprehension surrounding China’s holdings stem from the worry that it might “call in” its loans, but the use of credit as a coercive measure is heavily constrained. A creditor can only dictate terms for the debtor country if that debtor has no other options.

China undoubtedly has a pollution problem. Decades of rapid economic growth have dramatically expanded China’s energy needs, making it the world’s largest consumer of energy. Heavy use of fossil fuels, especially coal and petroleum, has made China into the world’s largest emitter of carbon dioxide.

All countries must balance the often competing priorities of economic growth with environmental and social welfare, but this challenge is especially acute in China, which in many regards is still a developing state. In the past, China has resisted compromising on economic growth, but rising domestic concerns over the environment have prompted China’s leaders to improve environmental standards and explore green alternatives.

The Chinese government has pledged a 60–65 percent cut on carbon intensity from 2005 levels by 2030. To further mitigate its emissions problem, China agreed in 2015 to establish a national cap-and-trade emissions marketplace for the power generation, steel and cement industries.

China continues to consume more coal than the rest of the world combined, but its burgeoning green sector has simultaneously transformed the country into a global leader in hydroelectric, solar, and wind power. Large-scale investments in infrastructure projects have made hydroelectric power China’s main source of renewable energy production, generating 16.8 percent of total electricity production in 2014. China is now the world’s largest producer of solar panels and possesses the greatest global capacity for solar power generation. In terms of wind energy, in 2015 China accounted for one-third of global capacity.

Nevertheless, China still has a long way to go in decreasing fossil fuel consumption. China’s wind-generated electricity accounted for just 2.1 percent of its total consumption in 2012, compared to 3.7 percent in the United States and 9.4 percent in Germany. China also struggles to protect its waterways and soil from industrial pollution. While investment in renewables demonstrates that China has taken steps toward addressing one of its most pressing problems, implementation of domestic and international targets, including those in last year’s Paris Agreement, remain to be seen. China may be the world’s worst polluter, but it is trying to clean up its act.

Myth #4: China’s currency policies give it an unfair trade advantage that undercuts the United States.

On the 2016 presidential campaign trail, candidates on both sides of the aisle have criticized China for manipulating its currency, but their statements misrepresent the role that exchange rates play in international economics. Currency revaluation is a common monetary policy. While China fixes its nominal exchange rate, countries like the United States similarly choose to intervene in their domestic market by setting their interest rates.

Much of the political criticism levied against China stems from conflation of nominal and real exchange rates. All governments that print their own currency can set their currency’s nominal exchange rate, but the real exchange rate—which is generally more significant for trade flows—is determined by purchasing power in domestic versus foreign markets. As a result, nominal exchange rates are often unrelated to trade flows. For example, despite decades of dollar depreciation against the yen, the United States experienced a widening trade deficit with Japan, from $1.2 billion in 1970 to $59.1 billion in 1995. From 2004 to 2014, when the dollar similarly depreciated against the yuan, the U.S. trade deficit with China more than doubled, from $162.2 billion to $365.7 billion.

Historically, China has used adjustments in its nominal exchange rate to manage price stability and address employment levels. While for years China sought to keep the value of the yuan stable in order to promote export-led growth, the issue of yuan valuation is becoming less significant. As China aims to rebalance its economy into a more consumption-oriented model, its economic policy has shifted toward promoting a strong yuan, which will decrease the cost of imports and encourage domestic consumption. A desire for a strong yuan may also reflect a desire to improve the currency’s international usage.

Recognition of the yuan’s international standing came in November 2015 when the International Monetary Fund entered the yuan into its basket of Special Drawing Rights currencies, which determines the mix of currencies countries receive when the IMF disburses funds. China’s inclusion offers considerable benefits to the global economy, as it requires the People's Bank of China to provide greater transparency on how the yuan is managed. However, the internationalization of the yuan faces considerable challenges. In order to strengthen the yuan for China’s domestic market, Chinese leaders have taken steps to open the country’s capital account, but doing so puts downward pressure on the yuan’s value.

Rather than criticizing China for its monetary policy, the international community should encourage China to further reduce existing barriers to trade and investment. China’s underdeveloped intellectual-property-rights regime and favoritism toward domestic companies pose serious challenges to fair and competitive international trade, and ultimately do more damage than a controlled currency.

One of the clearest examples of China’s increasing commitment to global governance can be seen through its participation in the United Nations. In recent decades, China has progressed from being a nonparticipant, to a hesitant supporter, to an active leader within the United Nations. China is now the third-largest contributor to the UN’s regular budget, the second-largest contributor to the peacekeeping budget and has committed over three thousand personnel to UN peacekeeping operations.

China’s changing role within the United Nations is also evidenced by its evolving position on sanctions against North Korea. After decades of watering down resolutions to suit its interests, China supported some of the harshest sanctions enacted in decades against North Korea in February 2016 after the much-criticized nuclear test.

China also supports global governance through its economic strength and largesse. Beijing is currently the largest provider of financing for developing countries, which includes support through the China Development Bank, the China Export-Import Bank, the New Development Bank (established by the BRICS) and the Asian Investment and Infrastructure Bank. Its increased global financial power has likewise empowered China to become active in the G-20, World Bank and International Monetary Fund.

Additionally, Beijing has signed various multilateral treaties that ensure Chinese support for critical global initiatives, such as the 2015 Paris climate agreement. Yet, it cannot be said that China universally supports a rules-based international order. China’s position on the Permanent Court at The Hague’s arbitration of conflicting claims in the South China Sea demonstrates that China, like all states, must balance its own interests with those of the international community. China rejects the jurisdiction of the arbitral tribunal, and has chosen to interpret the United Nations Convention on the Law of the Sea to suit its needs and concerns. Nevertheless, China’s recent record shows an increased commitment to multilateral cooperation than has been witnessed in previous decades.