5 ISIS Weapons of War Russia Should Fear in Syria 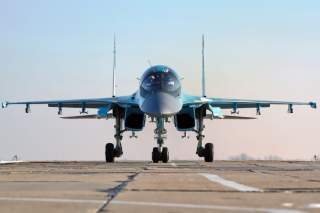 Reports out of Syria indicate that Russian fighter-bombers have begun airstrikes on rebel positions.  However, the extent of Russian commitment remains unclear. At the very least, we can expect that the troops and aircraft will forcefully protect Russian installations in the region. At the maximum, Russia may fight to preserve the Assad regime, and restore its control over parts of Syria.

Either way, Moscow will see pushback. While ISIS hasn’t focused its rhetoric on Moscow, we can expect that the presence of Russian troops in Syria will concentrate the group’s attention. Here are five weapons that ISIS can use against Russia:

In September 2012, a group of insurgents penetrated Camp Bastion in Afghanistan, and destroyed eight Marine Corps AV-8B Harriers. The attack gave the U.S. Marine Corps a huge black eye, and represented the greatest operational loss of U.S. aircraft since the Vietnam War. Ironically, if the F-35B had been close to on schedule, the attack could have cost over a billion dollars.

We can expect that the Russians will manage security at the Latakia airbase. Nevertheless, the dozens of combat aircraft at the base will prove a tempting target for ISIS infiltrators, potentially working with base personnel. Damaging or destroying Russian aircraft on the ground would provide the same kind of propaganda coup for ISIS as attacking Camp Bastion provided the Taliban.

ISIS has not yet demonstrated much capability for hitting targets at long range. A Sinai group affiliated with ISIS claimed to have fired a pair of rockets at Israel, but beyond short-range mortars, indirect fire weapons have not played a very large role in ISIS offensives.

Some other opposition groups in Syria have, however, seized control of medium and long range rockets, and used them in combat. Some of these rockets (many built to Syrian design) can hit the Russian positions in Latakia.  Russia hasn’t yet indicated much concern about these systems, but if ISIS manages to capture (or manufacture, or transfer) similar equipment to the vicinity of Latakia, it could give parked Russian aircraft a very bad day.

ISIS has not yet developed much in the way of surface-to-air capability, despite the efforts of the Syrian Arab Air Force and of the Coalition carrying out attacks across Syria and Iraq. Moreover, rugged Russian aircraft can sustain damage from the light anti-aircraft weapons that ISIS has managed to acquire.

Nevertheless, ISIS has some weapons that can damage Russian helicopters, and potentially slow-moving Russian attack aircraft. If Russian air attacks prove particularly effective, ISIS may have more incentive to put into service some of the SAMs it has seized along the way. Given that the Russians will operate with better equipment and training than the Syrians, and presumably with looser rules of engagement than the Americans, ISIS may well feel a need to improve its air defenses.

Rumors abound as to the number of Russians serving in the ranks of the Islamic State, but government sources suggest between 1,800 and 5,000, with most hailing from Chechnya. These fighters can hurt Russia in two ways. First, they likely have greater familiarity with Russian military tactics and procedures than anyone else in Syria (even the Syrian Arab Army).  If they can apply lessons learned from the Chechen Wars, they could provide a serious threat to the Russian deployment.

More seriously, these Chechens could, if they return to Russia, re-spark the devastating war that occupied Moscow’s attention for much of the past two decades. Indeed, returning fighters could spark conflict along much of Russia’s southern regions, and in the Central Asian countries that Russia regards as within its sphere of influence. Western European countries are afraid of returning fighters, but Russia has much more cause for concern.

The threat of ISIS has loomed large because of its effective propaganda machine. The organizations has displayed an unusual degree of aptitude on social media, generating attention that has, consequently, generated flows of new fighters and recruits. Much of the group’s efforts have thus far concentrated on Western countries, as well as on the Assad regime.

ISIS began stepping up its anti-Russian propaganda efforts in late spring of 2015. The deployment of significant Russian forces to Syria make it all the more likely that ISIS will concentrate on these efforts in the future. The ISIS propaganda machine has the potential not only to increase the number of recruits coming from Russia and Central Asia, but also for encouraging “independent” terrorist activity within Russia itself.

Russia is in an extremely tenuous position in Syria. If it wins, it gets a permanent alliance with the most hated man in the Middle East, the leader of a broken country. If ISIS or the other rebels win, Russia loses its foothold in the region, not to mention suffering the humiliation of defeat. Indeed, the risks either way seem so large, and the benefits so small, that many have wondered about the quality of Russia’s strategic decision-making.

Either way, Moscow will earn ever greater enmity from Islamic radicals around the world. One of the key insights of the U.S. strategic community in the late Cold War was that, however problematic Islamic radicalism might prove to the West, it could hurt the Soviets much more. Much has changed, but this remains true; ISIS has the potential to hurt Russia in a way that it can never hurt the United States.