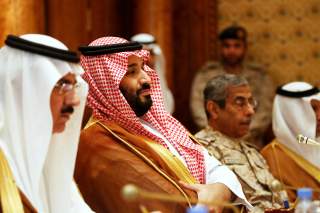 Much has been written about Saudi Arabia’s plans for nuclear power since the Trump administration announced last fall that it would conclude a civilian nuclear cooperative agreement with Riyadh. Almost all of this commentary suggests Washington must accommodate the kingdom’s desire to enrich uranium and reprocess plutonium, two activities that bring states to the brink of making bombs. In particular, commentators repeatedly raise five points—none of which are sound.

If Saudi Arabia is to have a prosperous economic future, we are told, it must meet its growing power requirements by burning less oil. For this, nuclear proponents insist, the Saudis need sixteen large reactors. Although often repeated, this is not true. In 2012, the Saudis announced their intention to build sixteen reactors by 2032. By 2017, Saudi planners had pushed this back to 2040. Shortly thereafter, Crown Prince Mohammed bin Salman backed an national development plan for 2030 that didn’t mention nuclear power, but instead focused on investing in renewables. Most recently, the Saudis announced that instead of sixteen large power reactors, they are only building two. Some have argued that this slippage reflects the kingdom’s desire to finance reactor construction with its oil revenues. With the price of oil dropping from $100 a barrel several years ago to roughly $60 a barrel today, the schedule for nuclear construction had to slide. If true, this suggests the Saudi nuclear “imperative” is less than urgent.

A more compelling explanation is that Saudis don’t need nuclear power. In fact, recent studies found that the Saudis could more cheaply meet their energy and environmental requirements by developing its natural-gas resources and investing in renewables—photovoltaic, concentrated solar power and wind. They also found economic value in upgrading the kingdom’s electrical grid and reducing subsidies that artificially drive up electrical demand. This should not be surprising. The United Arab Emirates, Riyadh’s next-door neighbor, which began construction of four power reactors several years ago, just announced that the UAE would not be building any more nuclear plants. Why? Cheaper alternatives: in addition to plentiful natural gas and wind resources, the Emirates are now investing in photovoltaic systems and solar thermal storage systems, which together can operate twenty-four hours a day more cheaply than nuclear. These findings also apply to Saudi Arabia.

Myth #2: Without a formal nuclear cooperative agreement with Riyadh, America will forgo billions of dollars of nuclear hardware and know-how exports to the kingdom.

This point presumes that the kingdom will stick with its 2012 energy plan, which it has already backed away from. It also mistakenly assumes that America still manufactures export reactors. The only American-headquartered firm that is actively interested in exporting to the kingdom is Westinghouse. It is entirely foreign owned and is a reactor designer, not a manufacturer. It’s currently in bankruptcy proceedings, and is eager to be bought by a Canadian holding firm. Naturally, Westinghouse would like its prospective buyers to believe that it has a clear shot at the Saudi market.

Unfortunately it’s, at best, a long shot. Westinghouse’s design, the AP1000, has yet to operate anywhere. The reactor’s construction is embarrassingly behind schedule and over budget both in China and the United States. Mismanagement by Westinghouse caused two reactors in South Carolina to be terminated after an expenditure of $9 billion, which, in turn, nearly bankrupted Westinghouse’s Japanese owner, Toshiba. Finally, American nuclear know-how and other nonnuclear electrical generating parts can and have been exported in support of non-American reactors abroad without a formal nuclear cooperative agreement. These goods would likely make up a majority of American nuclear exports to the kingdom but, again, their export does not require negotiating a nuclear cooperative agreement.

Myth #3: If Westinghouse does not win the bid, the Russians or Chinese will, reducing American nuclear influence in the region.

This argument is perhaps the most egregious. Consider: an unspoken motive for the kingdom to pursue a nuclear program is to develop an option to make nuclear weapons, if needed, to deter Iran. This would all but preclude buying Russian. Rosatom, after all, is building Iran’s reactors. If Saudi Arabia buys Russian, it is all but asking Moscow to let Iran know exactly what the kingdom is doing in the nuclear realm. Consider also Russia’s recent ill-fated nuclear dealings with South Africa (a contributing factor in forcing President Zuma from office) and Turkey (where Rosatom’s financial inflexibility prompted Turkey’s private financiers, who were underwriting half of the undertaking, to pull out of the project).

As for buying Chinese, doing so is also risky. The Chinese recently encountered “safety concerns” that delayed operation in Taishan of both its Westinghouse AP1000, and a French-based design. As for China’s top export nuclear design, the Hualong One (HPR 1000) reactor, the British won’t be done certifying it until 2022. China’s other possible export system, the CAP 1400, based on the yet-unproven AP1000, has yet to operate anywhere. What’s left? The kingdom’s original bid requirements were for two reactors that would produce 2,800 megawatts. The only country that has a reactor that is operating, that is properly licensed, and that has been built roughly on time and on budget that could meet this requirement is Korea’s APR-1400. The Saudis only changed their original bid requirements after the United States, China, Russia and France all complained. Given Korea’s relative success in building four APR-1400 reactors on time and on budget in the United Arab Emirates, and its success in operating a licensed APR-1400 in South Korea, the Korean reactor is still the odds-on favorite to win the Saudi bid.

Myth # 4: It makes economic sense for the kingdom to enrich uranium to fuel its own reactors.

No, it doesn’t. Saudi nuclear backers argue that the kingdom should enrich, given the uranium reserves the Saudis have discovered. Uranium, however, is plentiful globally and priced at historic lows (less than $22 a pound), as are uranium-enrichment services. More important, the kingdom would have to spend billions on a variety of plants to enrich uranium and produce its own nuclear fuel. Starting such an undertaking might make economic sense if the kingdom had roughly a dozen large reactors up and running. It currently has none, and has only opened a process to buying two.

Myth #5: United States has more to gain by accommodating Saudi Arabia’s demand that it be allowed to enrich uranium than resisting it.

Trumpeting these myths, proponents of a permissive U.S.-Saudi nuclear deal argue that Washington lacks the leverage to secure a Saudi pledge not to make enrich or reprocess. The best Washington can do, it is argued, is to ask Riyadh to defer such dangerous nuclear activities for several years. Some even suggest that acceding to Riyadh’s wishes is in Washington’s interest, since allowing the Saudis the capacity to make nuclear weapons–usable fuels might help “deter” Iran from acquiring nuclear weapons.

None of this seems sound. As already noted, the Korean APR-1400 is most likely to win the Saudi contract. Given this reactor’s American technical content, senior Korean officials are convinced they cannot export it to the kingdom unless the Saudis first reach a nuclear cooperative agreement with the United States. For this reason (and others besides), Seoul is inclined to take American guidance. Meanwhile, President Trump is trying to get the European parties to the Iran nuclear deal to devise a tighter follow-on understanding. A riskier approach would be for the United States to break from its policy (solidified in the 2009 U.S.-UAE nuclear cooperative agreement) to get non-weapons states in the Middle East to forswear enriching and reprocessing.

Besides the odd optics of looking like a version of the 2015 Iran nuclear deal (which President Trump says is “the worst deal ever”), allowing Riyadh to enrich and reprocess would immediately excite the humors of the UAE and Egypt. Both have U.S. nuclear cooperative agreements that allow them to request their agreements be modified if the United States offers any of their neighbors a more generous nuclear deal. Then there’s Morocco and Turkey: their nuclear agreements with Washington are up for renewal in 2021 and 2023. They too are likely to ask for equal treatment as soon as possible. How this serves anyone’s long-term interest is, at best, unclear.

Henry Sokolski is executive director of the Nonproliferation Policy Education Center and the author of Underestimated: Our Not So Peaceful Nuclear Future. He served as deputy for nonproliferation policy in the office of the U.S. secretary of defense from 1989 to 1993.