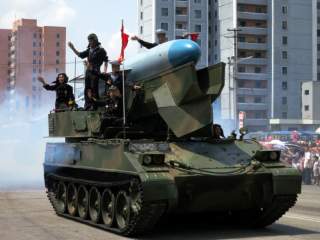 With the Democratic People's Republic of Korea (DPRK) claiming to test a thermonuclear weapon earlier this week, tensions are ratcheting up on the Korean peninsula.

Though the Korean War ended in 1953 with a truce, North and South Korea are still technically at war. Tensions periodically flare up because of Pyongyang’s ceaseless saber rattling and provocations—which have even included limited scale military attacks. But the Korean Armistice Agreement has, nonetheless, held firm over the past years because of Seoul’s restraint.

In recent years, it has become apparent, however, that the Republic of Korea—with its vibrant and developed economy—can more than handle the North if it came to a conventional military conflict. The North’s forces are mostly comprised of decrepit Soviet hardware from the 1950s and ‘60s. While South Korea enjoys a clear military superiority, there remains the worrying caveat that its capital Seoul—within the range of the North’s massed artillery—would likely be devastated during such a conflict.

Thus, Pyongyang sees its nuclear arsenal as the guarantor of regime survival—especially after rebels backed by Western air power deposed Libyan dictator Muammar Gaddafi, who had given up his nuclear program. Despite its antiquated military forces, the DPRK does posses some weapons that South Korea should fear—not counting its nuclear arsenal.

While North Korea’s massive forces are largely primitively equipped, Pyongyang possesses the capacity to launch a catastrophic artillery strike on the city of Seoul.

Most of the artillery pieces—numbering in the thousands—are already in place, camouflaged and dug in. Neither the U.S. military nor South Korean forces can hope to eliminate those weapons before they obliterate the city—which by some estimates would take less than two hours. By some estimates, the city could be hit by over half-a-million shells in under an hour.

North Korea’s artillery pieces include the 170 mm Koksan, which has a range of about 25 miles, using conventional projectiles. However, the city is well within range if the Korean People’s Army rocket-assisted shells—which have a range of just less than forty miles.

U.S. and ROK forces could eventually eliminate these artillery pieces, but damage would already been done—especially if the North Korean regime decided to use chemical rounds.

North Korea has a massive stockpile of chemical weapons—much of which can be used in conjunction with its artillery forces. But the poisons—which Pyongyang can produce domestically—can also be delivered by air or ballistic missile.

According to the Nuclear Threat Initiative:

“North Korea may possess between 2,500 tons and 5,000 tons of CW agents. The South Korean government assesses that North Korea is able to produce most types of chemical weapons indigenously, although it must import some precursors to produce nerve agents, which it has done in the past.  At maximum capacity, North Korea is estimated to be capable of producing up to 12,000 tons of CW. Nerve agents such as sarin and VX are thought be to be the focus of North Korean production.”

Nonetheless, North Korea’s weak economy and isolation hampers its production of such weapons.

North Korea’s military has cyberwarfare capability—which the country needs as an asymmetric means to offset its many conventional weaknesses. But little is known about Pyongyang’s capabilities except that they have launched several attacks in past several years.

Their full capabilities are not well known, but North Korea is not likely to be as adept at cyber warfare as Russia and China—nonetheless, it could be a formidable capability. It does not take much to cripple a country’s utilities or even disrupt command and control networks even with amateurish attacks—if the defender has not taken proper defensive measures.

North Korea has a fairly significant ballistic missile capability—which it developed with Russian and Chinese help. Some estimates show that North Korea has over 600 short-range Scud missiles, more than 200 Nodong missiles, and about fifty Musudan and Taepodong missiles. These weapons could be used to deliver conventional, chemical or even nuclear weapons to targets around the Korean peninsula and beyond.