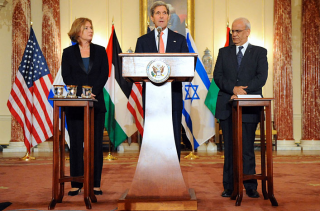 Being a diplomat or a negotiator is hard work, and requires the kind of stamina that Secretary of State John Kerry has successfully exhibited since the Senate confirmed him nearly two years ago.  Yet, when a diplomat or a negotiator is forced to serve as an enabler, facilitator, or coordinator of peace talks, an already hard job gets far more difficult.  Nerves can get frayed, the process can quickly get bogged down into shouting matches on the most minor of issues, war can escalate, and personal legacies can be destroyed.

Unfortunately, 2014 was the year of the failed peace process.  On issues as diverse as the Syrian civil war, the 60-plus year conflict between the Israelis and the Palestinians, and the inter-tribal and ethnic fighting in South Sudan, skilled negotiators from all over the world found themselves leaving their work with little to show for it.  The result is not only renewed fighting and the killing of thousands of additional men, women, and children, but the hardening of positions on all sides of a conflict.  Sometimes shaking leaders to their senses can be an especially grueling, at times impossible, undertaking.

Here are the five most noteworthy peace processes that failed in 2014.  Let’s hope each and every one of them is resurrected during the New Year.

1 – Syrian Peace Talks in Geneva - If you want an example of how a peace initiative can end as soon as it begins, you only need to look to the meeting halls of Geneva, where representatives from the Assad regime and the Syrian National Coalition attempted to sit down and try to resolve a tragic civil war.

Designed to implement the terms of the Geneva communiqué that called for the establishment of a temporary government of national unity, what was billed as a negotiation turned into a few useless weeks of bickering between old, stubborn men.  There were far too many people in the room to begin with—more than 40 foreign ministers gave speeches during the first introductory meeting on January 22, 2014—and the Assad regime was not under any major military pressure that would push them to compromise or retreat from its hardline principles.  This was affirmed almost immediately when Syrian Foreign Minister Walid al-Moallem spoke to the assembly, going way beyond his allotted time to depict opponents of the regime as foreign conspirators, terrorists, and violent killers seeking to destroy the fabric of Syrian society.  Meanwhile, outside beautiful Geneva, hundreds of Syrian civilians were being massacred in Aleppo in weeks of barrel bomb attacks from Syrian military helicopters circling overhead.

When all was said and done, the talks collapsed after three short weeks.

2 – Israeli-Palestinian Talks….Again – God bless Secretary of State John Kerry for trying.  Immediately after his confirmation hearing, Kerry used his honeymoon period at the State Department to chip away at the Middle East’s longest-running dispute—a conflict that, as a senator, he was so passionate in ending.  Kerry’s magic touch, his credibility with both sides, and his willingness to stay awake at all hours of the night was rewarded in July 2013, when Israeli Prime Minister Benjamin Netanyahu and Palestinian Authority President Mahmoud Abbas agreed to try shuttle diplomacy again.

At first, the atmosphere was relatively positive.  Tzipi Livni and chief Palestinian negotiator Saab Erekat—both of whom have worked together before—appeared to be making some kind of headway.  A preliminary deal was set whereby Israel would release several batches of Palestinian prisoners and the Palestinians in turn would stop pressing their grievances at the United Nations.

By the spring of 2014, however, Kerry’s initiative began to unravel.  None of the core issues, from what the borders of a future Palestinian state would look like to how millions of Palestinian refugees would be cared for, were close to being resolved.  Israel decided to slow down the release of the final tranche of Palestinian prisoners.  And, in a final straw that killed Kerry’s efforts for good, Mahmoud Abbas signed a reconciliation agreement with Israel’s archenemy, Hamas.  By April 29, 2014, both sides left the table and today, the Palestinians appear far more interested in suing Israel at the International Criminal Court that trying negotiations again.

3 – War in the World’s Newest Nation – When South Sudan finally gained independence from greater Sudan in 2011, the international community was hopeful that Africa’s 54th country could become the economic and agricultural powerhouse that so many of its citizens dreamed of.  South Sudan’s elites had another idea: war, heartache, ethnic tension, and a dysfunctional political system that was siphoning off billions to corruption.

By the end of 2014, there are roughly 10,000 South Sudanese who have been killed in an inter-ethnic war between President Silva Kiir’s Dinka community and former Vice President Riek Machar’s Nuer people (10,000 is the lowest estimate).  In general, the whole conflict began after President Kiir accused his deputy, Machar, of orchestrating a coup attempt against his government.  Nearly a year later, a disagreement between two men has spread into a civil war between the two biggest communities in South Sudan.

The conflict touches the heart of President Barack Obama, who once saw South Sudan as a rising star in sub-Saharan Africa.  In a statement from the president on December 12, 2014, Obama wrote an “appeal to the leaders of South Sudan to pursue peace as a way to honor those who have died.”  The East African community of nations in the Intergovernmental Authority on Development have tried to chisel Obama’s words into concrete throughout 2014, but have come up short of the full-scale, permanent reconciliation that would theoretically stop the violence across the country.  Although delegates from the Kiir and Machar camps are now talking about the big issues of political accommodation-- what an interim national unity government should look like and what powers the prime minister should have-- a resumption of large-scale violence is always around the corner.

Looking towards the New Year, citizens are frustrated that their political leaders are destroying their young country.

4 – Iran Nuke Talks – “Peace agreement” may not be the right term to use when describing the ongoing nuclear talks between Iran and the P5+1 powers, but everyone involved in the effort realizes that its failure could generate some kind of armed confrontation.  This is why the negotiations concerning how many centrifuges Iran can keep, what facilities Iran can build, and what nuclear fuel Iran can produce are so important: an answer to all three could prevent a conflict that nobody wants.

The Iran-P5+1 negotiations haven’t failed, per say.  In fact, advances have been made and agreements have been signed by all of the parties involved in the talks.  The Joint Plan of Action that was signed in November 2013 has been implemented by the Iranians throughout the entire year—freezing production of 20 percent enriched uranium, diluting much of their stockpile of, keeping production of 5 percent enriched uranium at a level rate, and allowing inspectors from the International Atomic Energy Agency (IAEA) to get into facilities that were previously inaccessible to the nuclear watchdog group.

Arriving at a permanent version of the JPOA, however, has consistently taken longer than Secretary Kerry’s optimistic predictions.  The interim deal has been extended twice already, and with the Republicans taking full control of the Congress in January, the possibility of more sanctions legislation being sent to the president’s desk has gone up exponentially.  For congressional Republicans, the Iran talks are already deemed a failure.

5 – Colombia-FARC Diplomacy – No one said ending Latin America’s oldest internal conflict would be easy, and that has been confirmed during the first two years of peace talks between the Colombian Government and the Revolutionary Armed Forces of Colombia.  The talks, hosted in Cuba and supported by Norway, hit a bump in the road in November 2014 when FARC rebels kidnapped a senior Colombian army general, which produced a sharp response from Bogotá and the temporary suspension of peace talks.  Thankfully for the participants, the general was released several weeks later and the talks are scheduled to continue in January 2015.

The talks haven’t failed yet, but they have been lengthy and full of complications.  The fact that there are so many issues involved, including agrarian reform, FARC demilitarization and demobilization, political integration, devolution of power to the regions, compensation for the victims, and counternarcotics, means that the talks will continue at a snails pace.  And, as the kidnapping in late 2014 demonstrates, slow progress in peace talks provides potential spoilers with more time and power to do something that could potentially ruin any further progress.  2014 wasn’t an altogether terrible year for the Colombian peace process—over a dozen joint communiqués were signed—but it also wasn’t the year when the conflict could be declared over.