5 Places Where World War Three Could Break Out 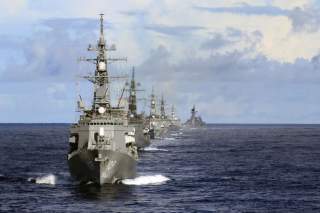 It seems these days the world is literally on fire. Conflict continues on and off in Ukraine, there are tensions throughout the Asia-Pacific, Ebola is on the rampage, ISIS continues its bloody war of attrition throughout Syria, into Iraq and on and on. Yet, could something even worse be on the horizon—a conflict with more-severe global ramifications?

Before we begin this foray into the five places where World War Three could break out, I should note a few qualifiers and weasel words.

First off, what’s World War Three? As illustrated by the Ukraine crisis and the Obama administration’s struggle to define what is going on in Syria/Northern Iraq, “20th-Century Industrial War” is out of fashion and has been for some time.

Some of the predictions below envisage regime collapse that leads to war, while the specter of a terrorist WMD attack has the capacity to turn apocalyptic very quickly. That said, this might just be a phase: state-on-state violence will still be theoretically and practically possible as long as nation-states possess the means to expend blood and treasure.

That’s why most of the predictions below examine the possibility of conventional strike and counterstrike between nations. No nuclear-armed power—whether it is the United States, China or Russia—would accept defeat to a peer competitor in conventional warfare without then inflicting the maximum penalty on its opponent.

That is one very good reason why World War Three as we know it is unlikely to happen; it is also why all of the possibilities mentioned below involve nuclear-armed—or potentially nuclear-armed—entities.

North Korea vs. the World:

News out of Pyongyang over the last several weeks that Kim Jong-un is feeling unwell has reminded people that Northeast Asia contains its very own brand of extremist Kool-Aid drinkers. The smart line on North Korea is that its “provocations,” to use the accepted term, are graduated steps in a controlled game of escalation that Kim plays to receive concessions in the form of aid or economic largesse from the international community.

The current talks between North Korea and Japan over the longstanding abduction issue are just one particularly cruel variation on this, where Pyongyang is trying to leverage the political importance of the abductees in Japan at a moment where both sides are short of allies in Northeast Asia.

The “provocation” theory works fine until you realize that at the end of the day, North Korea is still developing a nuclear-weapons program and mobile systems to deliver atomic-tipped warheads. Meanwhile, South Korea is building its own deterrent in the form of the “kill chain,” which ambitiously proposes knocking out Pyongyang’s nuclear weapons before they can leave the ground. Throw in the fact that China appears to have lost patience—and more importantly, influence—in North Korea since the purging and execution of Jang Song Thaek, and the situation on the peninsula becomes a lot less predictable.

For sure, North Korea’s behavior is grounded in the absolute logic of regime survival. But if Kim dies or can no longer ensure that the Pyongyang elite benefit from his rule, then all bets are off.

China vs. India (vs. Pakistan)

The border confrontation between India and China that was finally de-escalated on September 27 after nearly three weeks is the latest illustration of just how uneasy relations can be between these two massive neighbors. The recent arrival of a PLA Navy Type 039 submarine in Sri Lanka—China’s westernmost foray with a submarine—is another sign that Delhi and Beijing’s strategic priorities may clash.

Other than history and bloody-mindedness, there is no real reason why the two countries would be destined to go to war. China has concluded a number of successful negotiations with its land neighbors over border disputes—the Line of Actual Control is the only remaining dispute, in fact—and India has the strategic position and military power to exert regional supremacy over the Indian Ocean Region (IOR). The natural borders of the Himalayas and southeast Asia have created geographical spheres of influence that should keep both sides happy.

However, Beijing’s “all-weather friendship” with Pakistan and its moves into the Indian Ocean threaten India’s regional hegemony, while India’s “Look East” policy is unwelcome to China because it allies Delhi with Vietnam and Japan. This kind of strategic competition—along with bad decisions at flashpoints such as Ladakh and Kashmir—could lead to escalation from which neither side could step away.

The ongoing situation in the Middle East—whether it’s the Islamic State, Iraq, Gaza, Syria, Iran, Israel, Lebanon or the fallout from the Arab Spring—is so perplexing, confusing, horrific and insurmountable that the only thing we can say in its favor is that at least it has not led to World War Three.

For this to happen, the nuclear balance in the region would have to go irrevocably out of kilter. One obvious way this could happen: Iran getting the bomb and in response, Israel using its “widely suspected unmentionables.”

Another possibility deserving more scrutiny than it gets is whether the Saudis would upgrade their DF-3 ballistic missiles with DF-21s—something that is heavily rumored—or fit the older, less accurate DF-3s with nuclear warheads.

Another element of this scenario is the question of which way these missiles would be pointed—at Iran or Israel?

Other regional wildcards include the North Koreans helping out the Assad regime, or the Islamic State somehow capturing a previously unknown stockpile of fissile material and having the brainpower to weaponize it.

In this light, U.S. attempts to prevent Iran from getting the bomb make even more sense; why it is not equally scrutinizing Saudi Arabia’s intentions in this area, less so.

Before the air campaign against the Islamic State took over the news cycle, the biggest story of the year was what exactly was going to happen in east Ukraine. The shooting down of an airliner, multiple border violations by Russian troops and the annexation of Crimea had added up to force a major reevaluation by the West of its relationship with Vladimir Putin’s Russia.

The speed and intelligence of the Russian campaign bodes ill for NATO and other multilateral organizations such as the EU, which have been hamstrung by a committee-led approach to decision making that slows down their response times.

In fairness to NATO, the alliance is aware of this and has made a number of attempts to bolster its position in eastern Europe. At the Wales summit in September, it began to work out of the details of a Readiness Action Plan that will include very rapid reaction forces and deploying pre-positioned equipment and supplies along its eastern frontier.

The new force will be in contrast to what IHS Jane’s correspondent Brooks Tigner brilliantly described as “the distinctly un-rapid NATO Response Force (NRF), which currently needs months to deploy its full force of 20,000-plus troops and equipment.”

NATO also needs to work out a way to win the information war, which Putin has managed as adeptly as any confrontations on the ground in Ukraine.

These tactical considerations aside, at the heart of the issue is NATO’s eastward move, which Russia unsurprisingly opposes, and Moscow’s assertion that it had the right to “protect” Russian-speaking minorities in other countries, which NATO would have to react to if member nations such as the Baltic states or Poland were threatened.

China vs. America (via Taiwan, Japan or the South China Sea)

Last and definitely not least, the biggest potential conflict of all. The threat of the “Thucydides Trap”—that of a rising power and a preeminent power ending up at war—has become a notable talking point in Sino-U.S. relations in recent years.

Some analysts argue that Thucydides’ analysis of the Sparta-Athens relationship is a poor analogy for that between China and the United States.  However, it is undeniable that China’s rise and military buildup changes the balance of power and dangerously affects enough points of friction in northeast Asia.

The most dangerous feature of these friction points is that they involve third parties: the South China Sea, Japan, Taiwan or North Korea could all spark a localized conflict that quickly gets out of hand. The most dangerous, in my view, are the territorial disputes that could be contested in the maritime sphere: that is, in waters and territories close to China that Beijing claims and would likely contest if the status quo changed against its interests.

First up is the potential for conflict between Japan and China over the Senkaku/Diaoyu islands, which are covered by the U.S.-Japan defense treaty, as U.S. deputy defense secretary Robert Work reiterated just recently.

Another potential flashpoint is the South China Sea, where the Philippines—another U.S. treaty ally—is increasingly alarmed by Chinese island building in the Spratly Islands. The United States has been more reticent about helping Manila out than it has been about jumping to Tokyo’s defense, but both areas fall within what China calls its “core interests”: code for something it’s happy to fight for.

Probably the biggest unresolved “core interest,” however, is Taiwan. The dramatic swinging of the military balance away from Taiwan and towards China has been one of the biggest changes to East Asian security in the past fifteen years.