5 Questions Donald Trump Needs to Answer before Traveling to Asia 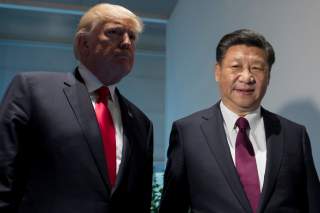 President Trump and his administration have devoted roughly as much time and attention to the Asia-Pacific as have previous administrations. Nevertheless, a perception is emerging of America’s benign neglect of the region. Concerns over U.S. reliability and the president’s judgment are hitting alarming levels. According to an international Pew poll in June, confidence in Trump to “do the right thing” in world affairs fell 55 points in Australia, 54 points in Japan, and 71 points in South Korea compared to the end of the Obama administration.

A variety of factors explain this troubling trend. The president’s decision to withdraw from the Trans-Pacific Partnership (TPP) trade agreement, and later the Paris climate accord, severely dented perceptions of U.S. reliability. The president’s attacks on U.S. allies triggered anxieties about the credibility of U.S. commitments. The administration’s focus on North Korea and failure to articulate a regional strategy have generated grumblings that Washington only has a North Korea policy for Asia, not a coherent vision for the region. The president’s transactional style—suggesting that Taiwan be used as leverage with mainland China, that Seoul pay for a U.S. missile-defense system, that Beijing would get a better deal on trade if it delivered on North Korea—also has fed a narrative that the United States will make any deal for the right price.

Meanwhile, China has placed itself at the center of every significant regional initiative, including negotiations of the Regional Comprehensive Economic Partnership, the establishment of the Asia Infrastructure Investment Bank, and the launch of the Belt and Road Initiative. China’s activism has magnified perceptions of a diminishing U.S. role in Asia.

While some may shrug off the significance of these shifts as growing pains in the transition to an “America First” foreign policy, the long-term costs to American interests could be major. For decades, the United States has adopted strategies to preserve access and prevent any competing power from dominating the region at America’s expense.

These efforts were informed by a judgment that letting Asia divide into spheres of influence could spark a great-power rivalry. Historically, in such circumstances, a rising power tests the resolve of an established power in order to find the boundaries of how far it can expand its influence. This leads to confrontation and, often, conflict. Mindful of these risks, the United States has sought to prevent drift toward great-power rivalry by ensuring that relations in Asia are guided rules and norms, not relative size and strength. This rules-based framework has ushered in a historic period of stability, giving space for Asia to experience an economic boom and become home to more than half the global economy.

Already, evidence of declining U.S. influence in the region is beginning to accumulate. Allies and partners are hedging between the United States and China, placing bets on both in order to guard against domination or abandonment. Leaders and citizens in Australia are engaged in a robust debate over where the country’s long-term interests lie in the region. The Philippines increasingly has been accommodating China while criticizing American military deployments. South Korea is seeking greater autonomy in its foreign relations. There also are indications that Asian states are growing increasingly sensitive to antagonizing China for fear of economic retaliation by Beijing.

As all of this occurs, Asia is only becoming more important to U.S. interests. The region is undergoing a demographic explosion that is powering Asia’s economic miracle. Many of the United States top trading partners—and most of the world’s middle class—are in Asia. Many of America’s most important security relationships are in Asia. And more than half of humanity resides in the region, making Asia key to addressing global challenges, from food security to climate change.

The growing importance of the region makes it all the more urgent that the United States regain the region’s confidence and preserve its traditional leadership role. To do so, the United States will need to articulate a vision for the future of the region and back its words with actions. The coming months present an important opportunity to advance a strategy and coalesce regional support for it, given the anticipated travel of senior officials and the president to Asia this fall.

In developing such a strategy, the administration will first need to reach consensus internally, and then articulate publicly, how it plans to address five fundamental questions.

Previous administrations have identified top national interests as including the security of the United States, its citizens and its allies; protection of an open international economic system that promotes prosperity; respect for universal values; and preservation of a rules-based international order. To be sure, the Trump administration likely will have its own perspective on America’s top national interests. Clarity on the purposes of America’s foreign policy will reassure our partners that our policy is guided by principles, not ad hoc impulses. Conversely, an absence of clarity will strengthen the incentive for allies and partners to hedge by drawing closer to China, just as it also will increase the likelihood that China will probe the boundaries of how far it can push before encountering pushback from Washington.

Where Does Asia Stand among Competing Priorities?

In recognition of the growing importance of Asia to America’s economic and security interests, the Obama administration sought to “rebalance” its focus and resources to the Asia-Pacific. The Trump administration has not embraced the “rebalance,” and in certain key respects, such as withdrawing from TPP, has unwound it. The old maxim “you can’t beat something with nothing” holds true. The vacuum left by the U.S. withdrawal from TPP is being filled by China’s regional economic initiatives. To restore the region’s confidence in U.S. staying power, the administration will need to articulate how it plans to advance U.S. interests, not just on security issues, but also on trade.

What Type of Asia Do We Want to Emerge?

There long has been a tension in Asia over how the region is organized. For much of history, the region was organized hierarchically, with China the dominant power. In recent decades, the United States has sought to cohere the region around rules and norms, not relative size and strength. It has championed the belief that all nations should live in security, enjoy equal rights and abide by common rules, pursue inclusive economic development, share responsibility in addressing problems that no nation can solve alone, uphold human rights and be responsive to the needs of their citizens. The United States has attracted support from across the region for its vision. In the absence of U.S. leadership, countries increasingly will find it difficult to resist China’s push to revert back to a hierarchical Sino-centric model whereby countries defer to China’s interests in return for economic incentives and/or avoidance of disincentives.

How Will the United States Advance Its Vision for the Future of the Region?

Under President Obama, the United States prioritized seven main lines of effort: strengthening alliances; increasing defense capabilities; prioritizing relations with emerging powers; deepening engagement with regional institutions; growing trade and investment; promoting universal values; and maintaining constructive relations with China. The sooner the Trump administration adopts or amends these lines of effort and matches words to deeds in advancing them, the higher the likelihood that countries in the region will gain confidence that the president has a plan for the region that benefits them, and that they can support. On the flip side, the longer the Trump administration delays in identifying priorities and relies instead on clichés such as “peace through strength” to explain its approach, the more ground it will cede to China.

What Type of Relationship Does the United States Seek with China?

The administration needs to explain, both at home and abroad, how China fits into its broader regional strategy. In doing so, it will need to provide answers to lingering questions: Does Washington have an Asia strategy that includes China, or a China strategy for Asia? Does Washington view China as an adversary, or as a partner with whom it competes in certain contested areas? Does Washington accept the longstanding and implicit compact that China will not seek to undermine the rules-based international order, and the United States will not seek to undermine China’s political system? Greater clarity on these questions will give both China and the region confidence in their ability to assess the risks/benefits of partnering with the United States.

None of these questions lend themselves to simple or straightforward answers. Nevertheless, answers will be needed if the United States is to provide reassurance that it recognizes the importance of Asia and remains committed to playing a leading role in the region. The United States has expended considerable blood and treasure to support the emergence of an open, stable, economically vibrant region. Preserving these gains and protecting American leadership will only grow more critical as Asia becomes more consequential.

Ryan Hass is a David M. Rubenstein Fellow in the Foreign Policy program at Brookings, where he holds a joint appointment to the John L. Thornton China Center and the Center for East Asia Policy Studies.