5 Questions Trump Should Raise about Afghanistan 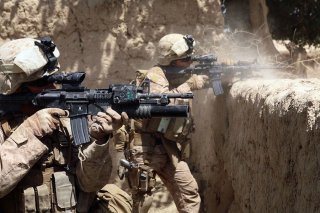 One of the more disturbing aspects of the 2016 presidential campaign — besides the name-calling, the callousness and the outright falsehoods that all of the candidates engaged in over a span of eighteen months — was the fact that nobody really spoke in concrete or detailed terms about America’s military involvement in Afghanistan. If Afghanistan were some blip on the radar screen, where the president decided to deploy a couple hundred special operations forces to assist the Afghan government with security functions, this would be understandable. But Afghanistan is about the exact opposite of a small-blip; indeed, when Americans hear the words “quagmire” or “stalemate,” Afghanistan usually comes to mind right next to Iraq.

Over the past fifteen years, the United States has devoted hundreds of billions of dollars and thousands of American lives for the purpose of degrading the Taliban insurgency, defeating al-Qaeda and the Islamic State, training the Afghan national security forces and propping up the government in Kabul. As of December 11, 2016, 2,392 U.S. troops have been killed, tens of thousands have been injured and nearly $70 billion has been spent on ensuring that the Afghan army and national police are able to defend themselves against a variety of insurgent threats.

Donald Trump will officially take the oath in a little more than month, so it’s past time for him to order his national security advisers on the transition team — utilizing the knowledge and expertise of national security professionals who are already in government — to undertake a comprehensive, interagency review of U.S. policy in Afghanistan.

Here are five questions that the Trump administration will need to ask as it figures out what to do with this longest of wars:

1. How long will the United States be needed? In pure numerical terms, Afghanistan is the longest, continuous conflict in American history. The Civil War lasted four years, World War II lasted four years, Vietnam dragged on for nearly eight, the Gulf War ended in about three months and the war in Iraq wound up after a little less than nine years. Compare all of those past engagements with fifteen years and counting in Afghanistan, and it’s easy to see why a majority of Americans (50 percent, according to a 2012 Gallup poll) would have preferred a faster U.S. troop drawdown from the country than even President Obama was willing to accept at the time.

Military experts and certainly the U.S. and NATO generals running the war would argue strongly against any conditions-based withdrawal schedule. Indeed, some of the same generals who spent time in Afghanistan directing all military operations, including Generals David Petraeus and John Allen, were ordered to implement withdrawal schedules that both believed were too quick and too generous to the Taliban. Yet at some point in time, U.S. officials involved with the Afghanistan portfolio will have to ask themselves how long the United States can keep maintaining a battlefield stalemate. Donald Trump railed against nation building during his entire campaign; what the United States is doing in Afghanistan today is nothing short of nation building, even if it’s occurring on a smaller scale than it was during President Obama’s first term.

2.  How long will Congress keep writing the checks? According to the Special Inspector General for Afghanistan Reconstruction (SIGAR), Congress has appropriated more than $115 billion to the government in Kabul since 2002. More than $50 billion of that sum has gone into the coffers of the Afghan army and police force since 2009, a surge of defense dollars that a poor and corrupt country like Afghanistan has zero experience handling properly. Congress just authorized an additional $4.2 billion for the Afghanistan security forces for FYI7, and President Obama has prodded the Trump administration to continue funding the Afghans at a similar price tag until at least 2020.

America’s NATO allies, by contrast, are way below the mark. At a recent ministerial donor conference on Afghanistan this summer, NATO agreed to fund the Afghan security forces to the tune of $800-$900 billion a year from 2018 through 2020. In other words, 27 NATO members have pledged to fund the ANSF at roughly 21 percent of what the United States is expected to contribute. Does that sound like fair burden-sharing?

3. Is stalemate the best the United States can do in Afghanistan? Afghan army and police officers have had their toughest fighting year since SIGAR started tracking the figures. More than 5,500 soldiers and police officers were killed in combat during the first eight months of this year, not including the approximately ten thousand who were injured in battle. The prevalence of static checkpoints across Afghanistan, a tactic that U.S. advisers have attempted to eliminate in favor of more mobile units, has afforded the Taliban with a bigger opportunity to plan operations and strike government forces at a time of their choosing. U.S. military officials are griping about checkpoints because they simply aren’t working; the percentage of districts that the Afghan government controls contracted from 65.6 percent in May to 63.4 percent in August.

Donald Trump likes to win, so it’s not inconceivable that he’ll step into the White House or visit “the tank” at the Pentagon and ask his generals why Washington is shoveling so much money at the problem in order to maintain a grinding stalemate. Is $4 billion a year in perpetuity a good return on investment if the money is being spent to merely hold on to what the Afghan government already has?

4. Should U.S. pilots and soldiers be granted more authority? Over the last year, President Obama provided U.S. special operations forces, U.S. pilots and U.S. advisers with greater latitude to go after anti-government elements in Afghanistan. Whereas U.S. forces were only allowed to attack the Taliban on the ground if they were in danger of overrunning an Afghan unit or for purposes of self-defense, the U.S. Air Force can now selectively preempt Taliban activity and bomb their positions if they conclude that militants are preparing for a strategic attack against Afghan forces.

President Trump could keep that level of authority, or he could expand it in the hope that more persistent bombing from the air will allow Afghan forces on the ground to drive the Taliban away from some of the district capitals in Helmand and Kunduz that they have been threatening to take this year. Approving the bombing of more targets, however, would also make the Afghans more dependent on the U.S. Air Force, a fact that shouldn’t be discounted if Washington hopes to assist Kabul in building a strong and logistically capable air force of their own.

5. Keep SIGAR, or abolish it? Donald Trump campaigned on saving money and cutting federal government overhead in order to reduce the national debt and spend the savings on more important accounts. SIGAR, despite the incredibly valuable function it has served for U.S. officials and the American public alike, is one of those bureaucratic agencies that could very well find itself on the chopping block for massive cuts. SIGAR’s operating expenses have totaled more than $327 million since the office was created by statute in 2008. Because SIGAR was imposed by Congress, it would take an act of Congress to dismantle it.

Before Trump thinks about closing SIGAR, though, he should recognize that much about U.S. operations and reconstruction projects in Afghanistan would be kept hidden from the American people were it not for the dedicated work of Special Inspector General John Sopko and his team of investigators.

The biggest debate the incoming Trump administration will need to engage on is whether U.S. objectives in Afghanistan — a country at peace with its neighbors, able to operate democratically, meet the economic and political aspirations of its citizens and ensure a basic level of domestic security across the country — is realistically possible. The five questions above should nevertheless be items for discussion whenever that Afghanistan policy review occurs — hopefully sooner rather than later.

Image: U.S. Marines during an operation in the Helmand province of Afghanistan. Wikimedia Commons/Public domain