5 Reasons America Should Not Fight Iran, Russia and Assad in Syria 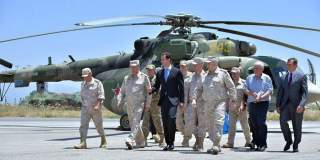 The idea du jour circulating inside the Trump administration and among terrorism experts and Syria watchers alike is that ISIS cannot be destroyed in Syria unless Bashar al-Assad is removed from power and Iran’s presence and influence are drastically curtailed. And in a perfect world, this indeed would be the best possible outcome to prevent ISIS and other jihadi groups, including Al Qaeda, from ensconcing themselves there. But needless to say, the Middle East isn’t a perfect world. U.S. retaliation against another chemical-weapons attacks, as the White House threatened late Monday, would be both necessary and justified. (Assad and his military would “pay a heavy price,” the statement read.) But pursuing an ambitious mission against Iran, Assad and the Russians in Syria is dangerous, imprudent and unnecessary to protect vital American security interests. Here are five compelling reasons why.

In his inaugural address, President Trump spoke about eradicating radical Islamic terrorism from the face of the earth. It cannot be done. Syria alone will remain an incubator for jihadists and Salafists of all stripes due to a toxic brew of poor governance, bleak economic opportunities, sectarian hatreds and beleaguered Sunni communities. And its ideology and propaganda will still be able to feed on the resentments and sense of victimhood and grievance among the Sunni population. Those who argue for a more assertive policy in Syria are right that, unless these problems are addressed, ISIS and other jihadi groups will continue to thrive even without the caliphal proto-state. But even the most risk inclined in the Trump administration cannot envision that kind of U.S. commitment in Syria, which would entail the United States and its allies committing thousands of troops and billions of dollars to militarily defeat all of their adversaries in Syria and to occupy, stabilize and reconstruct the country. Indeed, the president himself has strongly argued against nation building. Containing jihadists is realistic; ridding them from Syria is a pipe dream.

The idea that confronting Iran or trying to weaken the Assad regime in an effort to remove him from power or force him into a negotiated political transition is chimerical. That’s been evident for several years. Even if the United States made a commitment to take Assad out, it would lead to more chaos, no organized force aligned with the West to replace him and a mad scramble among all kinds of groups—Sunni jihadists like ISIS and Al Qaeda, pro-Iranian Shia militias, Alawites and Kurds—to consolidate control over real estate, making the situation worse. Assad was unprepared for a negotiated political transition before Russia’s intervention in 2015 helped turn the tide in his favor. He certainly would never agree to such an outcome now that he controls most of the critical cities and regions in Syria. Moreover, the Russians, who may ultimately want a political solution as an exit strategy, don’t seem to be in a hurry for one—and Moscow won’t be pressured and intimidated into accepting one, given what it has invested in Syria. Thus, even if getting rid of ISIS, in theory, means ridding Syria of Assad and Alawite domination, reducing Sunni grievances and stemming Iran’s influence, it simply isn’t feasible at a cost the American Congress and public are willing to pay. And if there is no attainable stable end state, the Trump administration’s moves to deepen military and civilian involvement in Syria need to be carefully weighed and evaluated against the precise objectives that an escalating commitment is designed to achieve. Those who are pushing for a more aggressive role in Syria have never identified the relationship between more U.S. engagement and any conceivable end state.

We Don’t Want a War with Iran

Iran is run by a repressive regime. It abuses human rights, has expansionist aims and sponsors terrorist acts throughout the Middle East. But trying to roll back Iran’s influence in Syria looks a lot easier in theory than in practice. Those pushing to eject Iran from southeastern Syria and stymie its efforts to control border crossings between Iraq and Syria—with the intention of creating a land bridge to the Mediterranean—have yet to demonstrate how any of this would contribute to the defeat of ISIS. Nor have they been forthright about the forces it would take to achieve these goals and sustain control over the region. One White House official recently referred to the creation of a Rat Patrol modelled after the 1960s TV show depicting a bunch of tough U.S. soldiers riding around in jeeps and harassing German soldiers in the North African desert. The administration is also planning to send a seven-member team to provide humanitarian assistance to areas in southeastern Syria that have been liberated from Islamic State control. All of this amounts to tactical gimmicks bound to fail, not a strategy. The administration’s Syria policies are untethered to any broader set of goals for combating ISIS and other jihadi groups—a goal that Iran shares more urgently, given the recent terror attack in Tehran. Moreover, ramping up a more aggressive and escalatory policy against Iran might jeopardize the nuclear accord. That agreement is far from perfect, but it will significantly slow down Iran’s march toward a nuclear-weapons capability for the next ten to fifteen years. Indeed, with the North Korean nuclear file very much open, the last thing the United States needs is another outlier state pushing to join the nuclear club.

Fears that the United States and Russia will slide into a full-scale war over Syria are overblown because both fully appreciate the potentially catastrophic consequences. But continued escalation of military incidents involving U.S. and Russian forces in Syria will make it all but impossible for the two countries to work out any kind of modus vivendi for stabilizing the country after Raqqa falls to U.S. and coalition forces. Russia confronts Washington with several inconvenient truths: first, it’s in a much stronger military and diplomatic position than the United States. Second, because Putin has the upper hand it is hard to imagine that he (or the Assad regime) will be amenable to imposing any meaningful restrictions on Assad’s freedom of action. Nor is Putin likely to accept any kind of international presence in Syria for peacekeeping, stabilization and reconstruction that undermines their control. Third, Moscow will be critical to establishing the political and economic arrangements that will be required for stabilization and reconstruction. In short, any kind of post-conflict cooperation with Moscow in Syria will not be possible if the United States tries to put the squeeze on Russia. Those who argue that pressure on Moscow is the only way to change Putin’s calculations ignore the president’s seeming unwillingness to tangle with him, the unwillingness of the United States to apply serious pressure and Putin’s willingness to push back if necessary.

U.S. Interests in Syria Aren’t as Vital as Those of Its Adversaries

No matter how important Syria is to the United States (and an argument can be made that it’s not all that important), Washington needs to decide how much it’s prepared to sacrifice and whether it’s ready to stay the course when Iran and Russia push back. There’s an elemental divide between the way the United States sees this issue and those who live in or close to the region: whether it’s Iran, Turkey, Israel, Jordan and the Gulf Arabs, they seem prepared to sacrifice far more than the United States. They know their neighborhood better, geography and demography give them key advantages, and for many the stakes are existential in a way they’ll never be for America. Nowhere is this more apparent than in Syria: Assad is fighting for his survival; Syria may not be as vital to Iran as Iraq is, but Tehran has already sacrificed huge resources, men and material to the fight; and Putin didn’t project Russia’s military power into Syria only to fold in the face of U.S. pressure. The reality is that the Syria-Iran-Russia coalition is much more a coalition of the willing than the alliance the United States has managed to assemble, which seems more like a coalition of the semi-willing and self-interested. The argument that the only way to change Russian or Iranian calculations is to escalate the pressure is a dangerous game, given the disparity in will, interests and allies that exists between the two sides. Who’d blink first, given the absence of congressional and public support for another military adventure with no end state (see Afghanistan and Iraq)?

Like Afghanistan where the United States is now also stuck, Washington will likely need to settle for a good-enough outcome, certainly not a victory. What this means now is impossible to say. After all, the United States has been in Afghanistan for a decade and a half, and still doesn’t know if anything resembling sustainable success is in the cards.

Still, the primary goal in Syria must continue to be weakening and containing jihadi groups, keeping them on their heels to prevent attacks on the United States, Europe and regional allies. This is not an optimal outcome, but it’s far more preferable than pursuing unrealistic and unrealizable goals that could drag the United States into endless and distracting wars it cannot win against far more committed and determined adversaries. Managing rather than eliminating the jihadist threat in Syria is neither a pretty nor heroic strategy, and it certainly won’t fix Syria or deal Iran a strategic blow. But for America, it’s the right approach, particularly when considering the risks and downsides of taking on Syria and Iran in these contested areas. And there are hopeful signs that the Pentagon at least is well aware of these dangers.

Aaron David Miller is a vice president and Distinguished Fellow at the Woodrow Wilson International Center for Scholars and author of The End of Greatness: Why America Can’t Have (and Doesn’t Want) Another Great President. Miller was a Middle East negotiator in Democratic and Republican administrations.

Image: Syria's President Bashar al-Assad visits a Russian air base at Hmeymim, in western Syria in this handout picture posted on SANA on June 27, 2017, Syria. SANA/Handout via REUTERS.