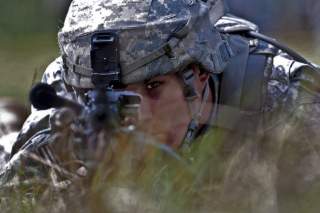 With Secretary of State John Kerry joining incoming Secretary of Defense Ashton Carter as well as Republican Senators John McCain and Lindsey Graham in publicly supporting U.S. efforts to supply lethal arms to Ukraine’s government to aid it in its war against separatist rebels and Russian troops in eastern Ukraine, it may look like a bipartisan consensus is emerging behind the idea.

Unfortunately, bipartisan approaches based on political convenience and wishful thinking—rather than clear foreign-policy logic—can be quite costly. George Kennan recognized the power of political pressure when he wrote that “a given statement or action will be rated as a triumph in Washington if it is applauded at home in those particular domestic circles at which it is aimed, even if it is quite ineffective or even self-defeating in its external effects.” The war in Iraq is a useful reminder of where this can lead if there is no serious discussion of the possible consequences of our decisions.

Recent proposals emphasize lethal defensive military assistance to Ukraine’s armed forces and suggest that providing it would demonstrate U.S. commitment to resisting Russian aggression and deter further offensive operations by imposing higher costs on Russia. While arming Ukraine may help Ukraine’s military kill more enemy soldiers, and might even increase the costs for Russia, it is quite unlikely that doing so will succeed in changing the Kremlin’s policy in Ukraine.

1. America’s commitment to Ukraine—and to resisting Moscow’s military interventions near its borders—has actually been quite limited, especially relative to Russia’s determination to support the Ukrainian rebels. Moscow knows this from our own words and deeds. The United States declined to aid uprisings against Soviet power in Hungary in 1956 and in Czechoslovakia in 1968 to avoid a possible war with another nuclear-weapons state.[1] The Bush administration similarly provided no meaningful military assistance to Georgia during its 2008 war with Russia, which ended with Georgia’s de facto loss of autonomous territories in Abkhazia and South Ossetia. President Obama has repeatedly stated that the United States will not intervene directly in the current small-scale Russian-Ukrainian war, probably for the same reason. As a result, the Kremlin can be confident that Washington will not go to the mat to save Ukraine.

Yet arming Ukraine will serve as a credible deterrent only if President Obama clearly and persuasively affirms that he is prepared to send significant U.S. forces to Ukraine to combat the rebels (and that he is willing to risk using nuclear weapons in the process, if needed). Is Mr. Obama willing to do that? Would Congress or the American public support him? Absent this, Moscow will retain “escalation dominance”—the ability continuously to escalate the conflict one step beyond any move the United States makes. Providing modest lethal assistance, especially if limited to defensive weapons, cannot demonstrate a commitment that U.S. leaders have already publicly renounced. Conversely, the open-ended commitment required for Washington to dominate each level in the escalation process would depart from six decades of U.S. policy in dealing with a country that remains a nuclear superpower despite its relative weakness in many other areas.

2. Limited lethal military assistance, whether offensive or defensive, won’t impose sufficient costs on Russia to deter its support for separatists. Providing weapons to the Ukrainian military may indeed impose greater costs on Russian forces. However, because Washington has limited its own options, Moscow could escalate its support for rebel forces and counter whatever the United States might provide without great fear of the consequences. Worse, providing lethal military assistance to Ukrainian forces or—in other words—helping Kiev to kill more Russian soldiers, could actually change the way many Russians see the conflict. We should certainly expect Russia’s state-controlled media to exploit such an opportunity to the greatest possible extent. Anti-Americanism is already at new highs in the country, with over 80 percent of Russians expressing negative views toward the United States and 42 percent seeing it as “hostile” in a recent poll by the respected Levada Center.

Imposing sufficient costs to deter further Russian support for the separatists and their offensive operations requires making the political cost of that support higher than the political cost of stalemate or a separatist defeat. Yet an American decision to impose costs that high in Ukraine would allow the Kremlin to frame the war as an existential U.S.-Russian conflict, rather than as a symbolically important but otherwise optional struggle to help Ukraine’s separatists. Turning the conflict in Ukraine into an anti-American war might dramatically increase the price that Russians are willing to pay—and thus make it easier for Russian president Vladimir Putin to send more troops and weapons into Ukraine, to marginalize the limited opposition that now exists and to persuade Russia’s citizens to endure greater hardship from Western sanctions. It would also give Putin an incentive to acknowledge Russia’s role openly, something that could make negotiations to end the fighting even harder.

3. Poor weapons are not the Ukrainian military’s principal problem. Over two decades, corrupt and irresponsible Ukrainian leaders allowed their military to erode into an ineffective force. As the current conflict began, Ukrainian military officials openly acknowledged that they could not field more than a few thousand combat-ready soldiers, and, as a result, the Kiev government has relied heavily upon determined but often untrained paramilitaries and volunteer militias. Providing anti-tank missiles, radar systems and similar assistance will not significantly improve Ukraine’s military capabilities.

Ukraine’s military suffers from poor leadership, inadequate training and a host of other problems. The United States has already experienced similar situations in Iraq and Afghanistan, where it has conducted extensive and costly train-and-equip programs over the years, with mixed results at best. After an effort far more extensive than current proposals for Ukraine, the Iraqi military failed to defend its own territory from Islamic State rebels.

4. Time is not on our side. America’s current economic-sanctions policy is in essence an economic war of attrition against Russia—an effort to defeat Moscow and to force it into concessions over Ukraine by slowly eroding the foundations of the Russian economy. Without the collapse in oil prices, it might have been a decade-long effort, if that. Even with oil at $50-$60 per barrel, the Kremlin might be able to hold out for two to three years before using up its reserves, according to many estimates. Yet a Russian economic collapse coupled with draconian government-spending cuts and other measures will not automatically change Moscow’s Ukraine policy. On the contrary, a deliberate attempt to collapse Russia’s economy is a huge gamble that could easily end with extreme nationalists in power and a Kremlin seizure of Western assets in the country. What would the Kremlin have to lose at that point? To paraphrase Karl Marx—nothing but its debts.

Can Ukraine survive longer than Russia? This is the key question if such a policy is to have any hope of success. But how much financial assistance will the United States and the European Union be willing to provide to bail out Ukraine when they know that much of the money would go directly to Russia’s state gas monopoly Gazprom to pay Kiev’s bills and ensure continued natural-gas supplies? Will members of Congress be prepared to authorize this much larger expenditure of taxpayer funds?

There is another time problem, too. If Syria is any guide, U.S. military assistance to Ukraine will require months of political wrangling, logistics planning and bureaucratic effort, not to mention waiting periods after formal White House notification of the Congress. Actually delivering weapons to Ukraine will be the quickest and simplest step. Every time Washington contemplates escalation, this clock (which is in fact a calendar) will start again. Mr. Putin has many fewer procedural and logistical obstacles, however, and may actually be able to counter U.S. assistance before Washington in fact provides its own help to Kiev. That will not improve Ukraine’s ability to fight.

5. We will not be able to succeed in managing the challenges Russia presents if we cannot be honest with ourselves. Moscow’s foreign policy is indeed becoming increasingly assertive in ways that could challenge U.S. national interests and America’s international leadership. Nevertheless, incremental escalatory responses like the administration’s economic sanctions or current proposals to arm Ukraine dangerously ignore the fundamental choice facing the United States by avoiding answers to important strategic questions.

Do Americans believe that Vladimir Putin will surrender fully—meaning abandoning eastern Ukraine’s rebels on the battlefield, forswearing their cause and returning Crimea to Ukraine’s control—without suffering a military defeat? Since doing so would probably seriously threaten Putin’s continued rule in Russia, not to mention his personal assets and safety, this seems quite unlikely. Are Americans ready to make confronting Russia the central organizing principle of U.S. foreign policy in a twenty-first-century version of Cold War rollback? In a new conflict like that, Moscow would attack U.S. weaknesses, not our strengths. Russia could cause considerable damage, even in economic collapse, through relatively inexpensive means, including facilitating third-party cyberattacks on U.S. financial systems or critical infrastructure, providing arms, training and intelligence to terrorists or destabilizing some of its other weak neighbors.