5 Russian Nuclear "Weapons" of War the West Should Fear 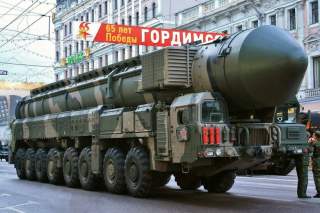 Modern Russia is not the Soviet Union. While the USSR adhered to a no first use policy for nuclear weapons, modern Russia dropped that pledge in November 1993. In fact, Moscow reserves the right to use its nuclear arsenal during any conflict under a doctrine it paradoxically calls “de-escalation.”

The reason for that is because while the Soviet military was confident it could win a conventional fight against all comers, the modern Russian military is a shambolic mess. While some units are well equipped and well trained, much of the Russia’s conventional forces are composed of poorly trained conscripts using antiquated hardware from the Soviet-era.

Therefore, Russia has to rely on its nuclear forces to offset NATO’s overwhelming conventional military superiority. As such, Russia is investing heavily in modernizing its nuclear forces—strategic and tactical.

Here are five Russian nuclear systems— think not just nuclear weapons but systems that have a “nuclear component”— that pose a threat to the United States.

Considerably smaller than the massive Project 941 Akula— also known as the Typhoon—the new boats are still larger than the U.S. Navy’s Ohio-class boomers. Based on a project conceived towards the end of the Soviet-era, the Borei-class boomers are capable submarines that can carry 16 Bulava submarine-launched ballistic missiles. The boats are quiet and have efficient hydrodynamics.

Three of the boats have been completed, there are three more being built—some of which are an improved derivative that some reports have suggested carry 20 missiles. Russia hopes to build 10 Borei-class boats—but there are questions as to whether they afford to pay for those vessels.

The Borei-class boomers would be useless without their nuclear armament. The submarines are armed with the new RSM-56 Bulava solid-fuel submarine-launched ballistic missile. While the Russian had a lot of trouble developing this weapon—a good number of the missiles exploded or experienced other failures during testing due to quality control issues. Most of those problems appear to have been solved, but only time will tell for sure.

On paper, the Bulava is a capable weapon. The 37-ton missile has a range of 6,200 nautical miles and can carry as many as 10 150-kiloton nuclear warheads. Normally, however, the missiles are only fitted with six warheads.

The Yasen-class attack submarines are part of a new generation of Russian attack submarine. While the first boat was laid down in 1993, Russia couldn’t afford to complete the boat until September 2011. Nonetheless, the Severodvinsk—the first Yasen-class boat— is an impressive machine. So impressive that the head of the U.S. Navy’s submarine development program had a model of it built for his office.

“We’ll be facing tough potential opponents. One only has to look at the Severodvinsk, Russia’s version of a [nuclear guided missile submarine] (SSGN). I am so impressed with this ship that I had Carderock build a model from unclassified data.” Rear Adm. Dave Johnson, Naval Sea Systems Command’s (NAVSEA) program executive officer (PEO) submarines said during the Naval Submarine League’s symposium in Falls Church, Va., late in 2014. “The rest of the world’s undersea capability never stands still.”

Russia is building improved versions of the Project 855 boats that incorporate lessons learned since 1993. The Yasen-class boats are not strategic nuclear weapons carrying vessels, however, they could be armed with nuclear-tipped cruise missiles.

There are a number of ways Russia can deliver tactical nuclear warheads to their targets—one such method would be the 9K720 Iskander short-range ballistic missile. That weapon could be deployed to places like the Kaliningrad Oblast on the Baltic coast to attack U.S. ballistic missile defense sites in Poland, for example.

Russia has continued to modernize its land-based strategic deterrent in recent years. The RS-24 Yars—also know as the SS-27 Mod 2—is the latest operational Russian intercontinental ballistic missile. It can carry around four independently targetable warheads and can be launched from either a silo or road-mobile launchers.

There is also another Russian heavy ICBM under development called the Sarmat, which is designed to overcome ballistic missile defenses. Not much is known about the weapon except that it will be liquid-fuelled and carry as many as 15 warheads. It’s supposed to be a replacement for the Cold War-era SS-18 Satan (R-36M).