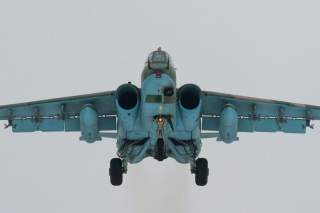 As of last week, Russia may have decided to join the fight against ISIS. The deployment of Russian air and ground forces to Syria probably has more to do with the survival of the Assad regime (and by extension, the survival of Russian influence in the Middle East) than it does with stopping the ISIS horror show.  Nevertheless, given the threat that ISIS poses to Assad, it seems likely that Russians will come into direct conflict with the armed fighters of the Islamic State.

So, what is Russia sending to Syria, and how might it affect the course of the battle against ISIS?

The Su-25 “Frogfoot” remains one of the world’s premier attack aircraft. Numerous Frogfoots have already served in the fight against ISIS, flying in the Iraqi and Iranian air forces. The Frogfoot, once considered the Warsaw Pact equivalent of the A-10, is a subsonic aircraft with the capacity to carry a large load of missiles and bombs. In addition, the Frogfoot carries a 30mm cannon for close air support duties.

The aircraft flown by the Russian Air Force will likely enjoy more advanced systems, better pilots, and better maintenance than their counterparts in Iraqi and Iranian service. This should make the aircraft more effective at hitting ISIS positions, if indeed Russia does take the offensive against the Islamic State. The Frogfoot is a better close air support platform than the attack aircraft currently flown by the Syrian Arab Air Force, the Su-22 and Su-24.

The conflict in Ukraine has demonstrated the vulnerability of the Su-25, as several Ukrainian Frogfoots were lost to Russian and rebel air defense systems. Thus far, however, ISIS has demonstrated no serious capability for shooting down aircraft like the Frogfoot.

Over the past fifteen years, the United States has leveraged the combination of special forces and precision-airpower to both conduct vigorous counter-terrorism, and to defeat conventionally deployed opponents. The so called “Afghan model” theoretically enables a well-equipped, technologically advanced force to defeat a conventional enemy with minimal ground footprint.

Russian special forces have played a different, although in some sense equally impressive, role.  Spearheading Russian covert activities and counter-insurgent efforts, Russian commandos helped turn the tide in Chechnya, conducted key seizures of territory in Crimea, and stiffened the resistance of rebels in Ukraine.

Now, some reports indicate the deployment of Spetsnaz special forces in Syria. Such a deployment would make sense in context of Russia’s broader efforts in the country. Russian special forces could not only train Syrians, but can also spearhead ground offensives against ISIS and other rebel groups. We don’t yet have a sense of the full conventional capacity of the Russian airpower-special forces team, but ISIS may find out shortly.

Helicopters are critical tools for counter-insurgency fights, and the Mi-24 Hind has a long history of serving the Russian military. Its most notable service came in Afghanistan, but the gunship has seen service around the world since the 1970s. The Hind has already engaged in extensive combat in the Syrian civil war, flying on behalf of regime forces.

Famously known as a “flying tank,” the Hind gives Russian forces important ground support capabilities. The choppers not only facilitate air mobility, the transfer of troops to critical locations, but also act as gunships. In addition to bombs, missiles, and rockets, the 12.7mm gun can do serious damage to prepared defensive positions, as well as vehicles. ISIS claims some success against helicopters, but may struggle against experienced, well-trained Russian pilots in modern ships.

Especially given the relatively small footprint of ground forces that Russia has deployed thus far, much will depend on the mobility of Russian troops. The Hind offers this, as well as a great deal of firepower.

The largest Russian ground vehicle that analysts have yet spotted in Syria is the BTR-82A armored personnel carrier. The BTR-82A is conventional, if modern, APC that offers mobility and protection for ground troops, as well as a degree of fire support for infantry. Photographs indicate that both Syrian and Russian forces may be using the vehicle.

The BTR-82A offers important capabilities, but ISIS has killed (and captured) tougher before.  What the deployment of this APC really suggests is a degree of Russian commitment to ground combat (and to saving the Assad regime) that has not yet been present in this war.  If the BTR-82A is the harbinger of a serious Russian ground deployment, then ISIS should be very worried, indeed.

Perhaps the most critical contribution Russian forces can make lies in intelligence collection.  While drones already reconnoiter ISIS positions on behalf of Western forces, the Assad regime lacks access to most of this information. Unmanned aerial vehicles have become one of the key platforms for ground-force support in armies around the world (even ISIS uses some primitive models). Russian drones can surveil ISIS, and use that information to support joint Russian-Syrian ground offensives.

The number and types of drone that Russia has deployed in Syria remains unclear.  Photographs indicate the presence of the Yakolev Pchela 1T, a short-range surveillance drone designed to provide data to battlefield commanders.  However, Russia now possesses a wide array of surveillance drones, as well as some attack variants.  We can expect that these drones--if eventually deployed to Syria--will enhance the effectiveness of both Russian troops, and of the Syrian Arab Army.

Russia may have bought itself a lot of trouble with its Syria deployment.  Moscow has aligned itself with the most hated man in the Middle East.  Even if Russian forces manage to beat back ISIS and save the Assad regime, Moscow will have a desperately wounded client with limited control over its own territory.  On the upside, Russia has enjoyed a lot of success with limited military deployments over the last decade, and its intervention in Syria could help open up a new relationship with Iran. Without question, Vladimir Putin has decided to make a high risk play. The strength of Russian arms may determine how much risk he has accepted.