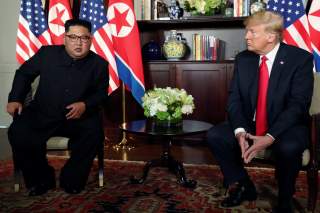 Finally, the United States should put its troop presence in and alliance with South Korea on the table. American disengagement would provide a form of security guarantee to the DPRK while simultaneously ameliorating Beijing’s concern over Korean reunification. Seoul is more than able to defend itself from a non-nuclear North.

An added advantage would be to disentangle the United States from the day-to-day squabbles in Northeast Asia, leaving Washington freer to decide when vital interests truly were at stake. North Korea is a “threat” to America only because the United States is “over there,” intervening in what is essentially a Korean civil war. Otherwise Pyongyang would have little interest in America, and certainly no reason to threaten the United States.

For seventy years North Korea has been a seemingly intractable problem. President Trump deserves credit for his willingness to ignore critics even within his own party and meet Kim. Now comes the hard part. The president must demonstrate similar independence and determination in making the tough compromises necessary to strike more detailed agreements with North Korea, especially one to fully denuclearize. The task could prove impossible. But the attempt would be worth the effort.

Doug Bandow is a Senior Fellow at the Cato Institute and a former special assistant to President Ronald Reagan. He is the author of Tripwire: Korea and U.S. Foreign Policy in a Changed World and co-author of The Korean Conundrum: America’s Troubled Relations with North and South Korea.