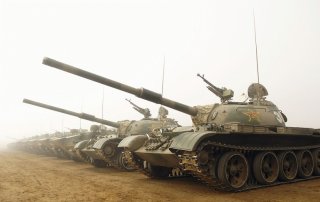 Only the most techno-fanatic would argue that a certain type of tank has changed history. There are so many other causes -- military, political, economic, social -- that explain victory and defeat far better than size of gun or thickness of armor.

And yet, certain tanks have gone down in history not for what they were, but what they symbolized. Whether those tanks were the best tanks, measured by whatever subjective factors define "best," doesn't matter. The fact is that in historical memory, certain tanks will forever be associated with certain conflicts.

Consider these five tanks and their influence on history:

Laugh if you must at the funny-looking rhomboid that looks like the tank factory forgot to add a turret. By today's standards, the Mark IV's half-inch of armor was a joke. Its armament of small cannon and machine guns was feeble, its speed of four miles per hour slower than an infantryman.

Except that the tank could cross No Man's Land and survive, while the infantryman could not. For most of the First World War, the Allied armies had battered themselves bloody against German defenses. Machine guns, artillery and barbed wire suggested a future where technology created battlefield stalemate. Where an attacker -- no matter how many weeks his artillery barrage pounded the defender or how many men went over the top -- could only look forward to seizing a few hundred miserable yards of blood-soaked ground.

The Mark IV symbolized technology's ability to break that stalemate by knocking out machine guns and trampling barbed wire, thus enabling the "Poor Bloody Infantry" to achieve a breakthrough. Not that there weren't more important reasons why Imperial Germany sued for peace in 1918. Its armies were tired and its civilians starving from the Allied blockade, even as fresh American troops poured into France. By 1918, the Allied armies had become combined-arms forces far more proficient than the mass armies that slaughtered each other at the Somme. Nonetheless, the Mark IV showed that whatever challenges technology created, technology could solve.

It is a myth that Germany had more and better tanks than the Anglo-French armies in 1940. The French Char B1 heavy tank and S35 medium tank were better than their German counterparts, while the British Matilda heavy tank was immune to anything but German 88-millimeter anti-aircraft guns pressed into service as anti-tank guns.

Ironically, the backbone of the early Nazi armored onslaught was actually the little Mark II panzerkampfwagen (armored fighting vehicle). Weighing only 10 tons and armed with a 20-millimeter cannon, it was a solid if not outstanding design. Even if it wasn't as big or powerful as some Allied tanks, the Mark II had the advantage of being crewed by a tank commander as well as gunner, in contrast to French tanks where the commander had to command the tank and shoot the gun at the same time. Perhaps more important, German tanks had radios while French (and Soviet) tanks didn't, thus allowing the panzers to fight in a coordinated fashion amid the smoke and confusion of battle.

These advantages don't explain the stunning German victories against an Allied tank fleet that should have prevailed in 1940. Better tactics, training, and leadership helped, as well as air superiority. But the Mark II wasn't a great tank, it was good enough to allow skilled commanders like Guderian and Rommel to practice their battlefield wizardry and subdue Western Europe.

Hollywood's classic tank portrayal is of a metal monster crushing puny humans like matchsticks. That's not usually how it works.  Tanks that try this have a habit of ending up burning wrecks at the hands of anti-tank weapons and determined infantrymen.

But this was cold comfort to German soldiers during the invasion of Russia in 1941. German forces had been accustomed to sweeping enemy armor of the battlefield, and the performance of the older Soviet tanks like the T-26 and BT-7 only confirmed that experience. But German soldiers watched in shock and horror as their 37- and 50-millimeter tank and anti-guns bounced off the thick hide of Soviet T-34 medium tanks and KV heavy tanks.

The 26-ton T-34 had thick, well-sloped armor to deflect shells, a powerful 76.2-millimeter gun, and wide tracks and a diesel engine that could propel it at a speed of 30 miles per hour and let it maneuver through mud without getting stuck.

Not that the T-34 was wonder weapon. It had no radio and the tank commander also manned the gun as in French tanks. Nor did it prevent the Wehrmacht from annihilating T-34s -- along with much of the Red Army in Western Russia in the summer and fall of 1941.

Nonetheless, the fact that the "inferior" Slavs could produce a tank that outmatched anything in the German inventory was not only a blow to German morale during one of the most pivotal campaigns in history. It was also a sign that Germany was in a deathmatch with a foe much more formidable than any it had previously experienced.

Mediocrity is faint praise. But while the Sherman was not exceptional, it proved that good enough was the enemy of better.

The M4 was too tall. Its gun and armor were good when into action in 1942, but lacking against late-war German tanks. Yet it reasonably reliable, capable of mass production unlike the big German tanks, and had adequate firepower and protection. "Adequate" is hardly a compliment, but it was good enough.

With 49,000 produced during World War II, the Sherman formed the backbone of the U.S. armored force, as well as the British, Free French, Polish and Australian forces. Even the Soviets received 4,000 Lend-Lease Shermans; many Soviet tank crews preferred their beloved emchas because they were more comfortable and reliable than the T-34. The Sherman came into its own during the Allied breakout from Normandy in the summer of 1944, when it rolled across France at a rate that would have left the German Tigers and Panthers broken down by the roadside.

The Sherman came to symbolize industrial armored warfare, food for a Moloch of a world war that devoured tanks like candy and where expensive machines were as expendable as bullets.

There is nothing notable to say about the Type 59. It is a Chinese knockoff of the Soviet T-54, an early version of the ubiquitous T-55.

But it has an historical claim to fame. It was the tank of Tiananmen Square, the iron embodiment of the totalitarian state against the human desire for freedom, as a lone Chinese citizen confronted the column of T-59s in that iconic 1989 photo that seared the world's conscience.

An undistinguished product of late 1950s tank design, the T-59 still lives on in various nations like Burma, North Korea and Pakistan. But in that brief moment of tank versus human dignity, it carved its name in history.