5 Things You Need to Know about Putin's Popularity in Russia 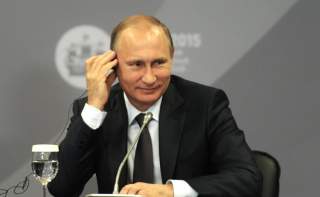 Since the crisis in Ukraine erupted, there has been a growing disconnect between how Russian president Vladimir Putin is perceived in the West and at home. In the former, policymakers and media commentators have been very vocal in denouncing the Russian leader's actions in Ukraine, and the opinion of the general public in those countries is similarly critical. By contrast, the reaction of Putin's domestic audience couldn't be anymore different and Putin appears quite popular. Here are five reason why this is the case:

1. Most Russians really do support Putin:

The latest numbers on Putin's popularity did not come from some Kremlin entity, which might, to put it delicately, have a conflict of interest. Rather, they came from the Levada Center, an independent and respected polling agency whose leadership has a contentious history with the government. The pollsters at Levada have no incentive to fabricate Putin's approval ratings to bolster the public image of the Kremlin.

While it is true that in authoritarian societies, even independent polls can overstate the leader's popularity due to citizens not wanting to dissent from the political climate, conformity can only account for so much. The magnitude of Putin's popularity means that even with this factor taken into account, he still would have the support of the overwhelming majority.

In January 2014, shortly before the start of the crisis, Vladimir Putin had a 65% approval rating. Since then, his approval rating has skyrocketed to a stunning 89%, even as Russia's economy is facing sanctions related difficulties. This is an all time high for him, with his previously highest approval rating being 88% in 2008, shortly after victory in the Russo-Georgian War.

3. Putin's personal popularity doesn't translate into support for the way Russia is ruled:

Comparing the support most Russians express for Vladimir Putin with their views about the Russian government as a whole, reveals a stark contrast. 58% of Russians say that government officials primarily seek to preserve and strengthen their own power and 60% say that government officials are not accountable to society. Russians are not over eager to spend quality time with government employees, with 69% of them trying to have minimal interaction with the government. Nor do Russians posses strong faith in the legal system, with 47% claiming not to feel protected by the law while only 41% saying they did. These numbers illustrate not only a lack of support, but an absence of trust for the Russian political system outside of Putin.

4. Sanctions may actually be helping Putin:

Some analysts have argued that once sanctions hurt the average citizens, Russians would lose enthusiasm for Putin's actions in Ukraine, and perhaps even protest like they did in 2011 and 2012, forcing Putin to chose between backing down on Ukraine or facing a potential revolution at home.

But this has not occurred. From September 2014 to June 2015, Russians who claimed to be "very seriously" or "somewhat seriously" affected by sanctions rose from 16% to 33%, whilst the number of people who claimed to have suffered no negative side effects from sanctions fell from 35% to 13%. During this same time period, Putin's popularity continued to grow. With 66% of Russians believing that Western sanctions are meant to "weaken and humiliate" Russia, many have rallied around the flag and embraced Putin as a "father protector" defending the country against foreign onslaught. Instead of blaming Putin for their economic woes, many Russians blame the West. Nearly half of all Russians say that sanctions are intended not only to cripple elite circles, but also to punish ordinary Russians. Many thus regard sanctions as assaults on them and their families, in addition to being an attack on their country.

While it is conceivable that this could change in the face of greater economic hardships, it would be reckless to assume that it will. If it does not, then Putin may find himself under pressure from the Russian public not to appear surrendering to the West, making it more difficult for him to make concessions.

5. On Ukraine, even some in the opposition support Putin:

While Putin's actions in Ukraine have undoubtedly further bolstered him in the eyes of his conservative base, his 89 percent approval rating would not be possible without broader support. In fact, several prominent opposition leaders have spoken up in favor of the current policy towards Ukraine, and in certain cases urged Russia to go beyond. Sergei Udaltsov, a key firebrand during the 2011 mass anti-Putin protests who was sentenced to 4.5 years in prison for his role in those protests, celebrated the result of the Crimean referendum, proclaiming, " I am a Soviet patriot, and consider the destruction of the USSR a great mistake and crime, so I regard the return of Crimea as a small but important step towards the rebirth of an updated Union." Likewise, Eduard Limonov, a longtime Putin foe who has spent time in jail for his political activities, called for military intervention not only in Eastern Ukraine, but also for the Black Sea Fleet to be sent to Odessa.

But left-wing nationalists are not the only members of the traditional anti-Putin coalition to hold such sentiments. In an interview with Snob magazine, liberal journalist Ksenia Kirillova bemoaned the endorsement by many in the middle class intelligentsia of Putin's stance on Ukraine, concluding, "Even if they did not believe in the 'Nazis in Ukraine', most of them sincerely believe in the hostility of the West." Admittedly, such views are not the consensus in opposition circles; however, these statements demonstrate that there isn't much prospect in a united front by the opposition against Putin's Ukraine policy. Furthermore, the growing prevalence of such sentiments even amongst the opposition has made liberal activists reluctant to advocate for ending the conflict on terms favorable to the West. For example, both popular blogger Alexei Navalny and oil tycoon Mikhail Khodorkovsky have asserted that they wouldn't support returning Crimea to Ukraine.

Taking all of this into account, even if the West succeeds in further weakening Putin economically, it may up end up strengthening his position domestically. Putin has an 89% approval rating not merely due to the populace's enthusiasm about his annexation of Crimea, but because Western sanctions have helped stoke nationalist fervor and inspire personal feelings of resentment towards the West. Rather than serving as a revitalizing spark for the opposition, the situation in Ukraine has further divided it, and may produce further polarization of it should relations with the West continue to deteriorate. Finally, the Ukraine crisis and the ensuing sanction has lead many to overlook the apparent flaws in the political system because of their grievances with the West. Whatever next step Western policymakers decide to take in dealing with Russia, it is important that they think hard about how punishing Moscow may affect Russians beyond Putin himself.

Dimitri A. Simes is a staff member of the Center for the National Interest.