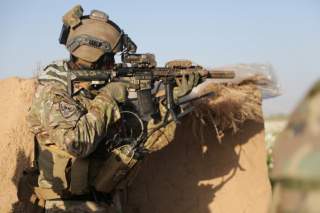 Special operations forces (SOF) have always held a certain mystique. Often working in the shadows, the exploits of these specially selected troops have sometimes attained near mythological status.

But while often depicted as super soldiers, SOF units are often tailored for particular mission sets—such as strategic reconnaissance, unconventional warfare, foreign internal defense and counterterrorism. Other units specialize in direct action missions—like raids and ambushes—but each force is different and trained for their particular job. There is no apples-to-apples comparisons—much of it comes down to the individual commando and the units particular mission set.

In the United States, a number of the most elite SOF units trace their origins back to the 1980s when they were formed or revamped to deal with the growing threat of terrorism in places like Iran and Lebanon. This proved extremely valuable two decades later when the United States was forced to confront an even more malign terrorism threat following the 9/11 attacks in New York and Washington. In the more than a decade since those attacks, America’s special forces— many of which are now part of Joint Special Operations Command (JSOC)— have time and again proved instrumental in combating terrorism.

Here are the five U.S. SOF units that every terrorist fears:

In the murky and highly classified world of special ops, no unit enjoys the notoriety of the Naval Special Warfare Development Group (DEVGRU), better known as Seal Team Six (its previous name).

Like many of the most elite U.S. SOF units, Seal Team Six was formed in the aftermath of Operation Eagle Claw, the botched attempt to rescue American hostages in Iran in 1980. Seal Team Six was officially established the following year and primarily tasked with conducting counterterrorism operations in maritime environments. Its first commander, Richard Marcinko, once claimed that despite having only 75 shooters at its inception, the unit was given more training ammunition than the entire Marine Corps.

The training appeared to pay off as Seal Team Six conducted a number of daring operations during its first decade, including rescuing and evacuating Governor Sir Paul Scoon from Grenada during Operation Urgent Fury. Similarly, in 1991, the unit was reportedly responsible for recovering Haitian President Jean-Bertrand Aristide after he had been overthrown in a coup.

Although it has reportedly become a rare multi-functional SOF unit, Seal Team Six continues to carry out its original counterterrorism mission as part of Joint Special Operations Command (JSOC). In fact, it is believed to be “one of only a handful of US military units authorized to conduct preemptive actions against terrorists and terrorist facilities.” In this role, it is most famous for conducting the operation that killed Osama Bin Laden in Abbottabad, Pakistan in 2011.

While not nearly as well known as its Navy counterpart, the Delta Force is perhaps America’s most capable special operation forces when it comes to direct action missions. Originally formed the 1970s, Delta Force has regularly spearheaded operations against global terror networks since 9/11. Indeed, together with SEAL Team Six, Delta forms the core of JSOC. One of Delta Force’s most famed missions in recent years was capturing Abu Anas al-Libi, an al-Qaeda operative wanted for the 1998 bombings of two American embassies in Africa, during a raid in Libya in October 2013.

While Delta’s exact composition is a closely guarded secret—technically, the unit’s very existence is secret—the unit is thought to have three squadrons of about 120 operators each. There are also intelligence specialists and other support staff that bring the total complement of the unit to about 1,000 (this might have changed since 9/11).

Delta operators— who usually come from the 75th Ranger Regiment of the U.S. Army Special Forces Groups—are picked during a gruelling selection course where the entire recruiting class is sometimes rejected. Those who do make the cut undergo a rigorous six-month training course before they are allowed to take part in operational missions.

Special operations forces don’t just consist of shooters, and in fact many other vital elements are essential to their success. To begin with, commandos have to get to where they are needed to be successful. In the U.S., the task of delivering them to their destination often falls to the elite pilots and aircrew of the U.S. Army’s 160th Special Operations Aviation Regiment—called the Nightstalkers. Formed after the disastrous Operation Eagle Claw mission in 1980, the Nightstalkers have been instrumental over the past decade of fighting in the greater Middle East.

The unit operates a fleet of nearly 200 helicopters, which consists of souped-up versions of the aircraft flown by the regular Army. These include AH-6 and MH-6 Little Birds, MH-60M Black Hawks and MH-47G Chinooks. There may be a portion of the unit that flies specially modified stealthy versions of the Black Hawk like the ones that participated in the Bin Laden raid in Pakistan, but that could have also been that shadowy unit known as the Aviation Tactics and Evaluation Group.

The U.S. Air Force’s contribution to the Tier One JSOC mission is the elite 24th Special Tactics Squadron, which provides Delta and SEAL Team Six with Combat Control Technicians and Pararescue jumpers. While not nearly as well known as Delta or SEAL Team Six, the 24th STS has participated in almost every action the other components of JSOC have undertaken. That’s because the 24th STS does not participate in independent missions. Instead, its specially trained airmen are attached to Delta and SEAL units to control the aircraft that are supporting the mission.

Consequently, Air Force commandos in the 24th STS are put through a training process that is grueling even by the exceptional standards of Special Operations Forces. Along with being proficient at their own mission of controlling airpower, commandos in the 24th STS must be capable of fighting on land alongside their Delta counterparts, as well as swimming with the SEALs. It’s little wonder then that some special operations soldiers claim that STS airmen are as close to the stereotypical special operations commando as it gets in real life.

Intelligence is a vital part of special operations and, consequentially, JSOC has its own intelligence unit that has had many names but is most often referred to as the Intelligence Support Activity. Like the U.S. Army’s 160th Special Operations Aviation Regiment, the unit was first created in the aftermath of the botched hostage rescue attempt in Iran in 1980. Its original mandate was to help prepare for a second (and, it was hoped, less disastrous) attempt to free the American hostages in Tehran.

Although a second rescue attempt was never attempted, the ISA has hardly gone to waste. The Activity, as the unit is often called, gathers the intelligence JSOC uses to execute its operations on the ground, and this intelligence has been absolutely crucial to the command’s success.

Few details are known about the Activity’s actual capabilities, but it is believed to have extensive signals and human intelligence capability. It also reputedly has its own shooter cell for emergencies. Most of its members are believed to be drawn from the U.S. Army’s Special Forces Groups.