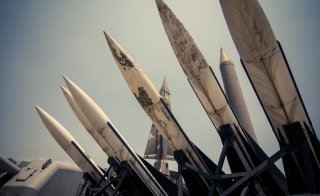 When the crystal ball dropped in Times Square this past Saturday, millions of people in New York threw the confetti, kissed their loved ones and sang Frank Sinatra’s “New York, New York,” with an eye towards a more hopeful future. Tens of millions of additional Americans across the country celebrated with a huge sigh of relief that 2016 came to an end; the year was bizarre, exciting, historic and fantastical all rolled into one. The topper of course was a real estate developer, reality television star and tabloid hound named Donald J. Trump beating the Republican and Democratic establishments with nothing but his propensity to rile a crowd, his Twitter account and his emotional connection to America’s working class.

How could this year, indeed any year, possibly be as historic as 2016?

Here are five stories to watch as the months go by:

1. Putin the peacemaker: In the eyes of the west (excluding the rightist populist parties that are rising in Europe), Vladimir Putin is a former intelligence officer who is as cunning and clever as he is brutal. Imagine Putin cuddling with a cute, little puppy and…well…it’s practically unimaginable. The man has silenced his domestic political opponents, allegedly authorized the hacking of the Democratic National Committee and partnered with the Iranians to completely level one of the most iconic cities in the Middle East in order to strengthen the negotiating hand of a despot.

But the Russian president is beginning to get into the peace game. A few days before 2016 came to a close, Putin partnered with Turkish President Recep Tayyip Erdogan to establish Syria’s third ceasefire agreement in twelve months — a deal that included a complete halt to any “attacks with any weapons, including rockets, mortars, and anti-tanks guided missiles,” and a halt to airstrikes from the Assad regime. The deal includes a ceasefire mechanism whereby the guarantors will monitor the terms of the truce along key points of contact, and recommend sanctions or punishments to the parties if and when violations occur. The truce is largely holding over its first couple of days, which means that political talks scheduled for January 15 in Astana could in fact proceed as planned. How ironic would it be if (a big IF) the talks actually generated a political transition agreement among the parties, with Vladimir Putin in line for a Nobel Prize?

2. Putin-Trump relations deteriorate: At the present time, Vladimir Putin and President-elect Donald Trump are about as buddy-buddy as two men who’ve never met can be. Putin holds off on retaliatory expulsions of U.S. diplomats after President Obama enacted sanctions for Moscow’s alleged cyber hacking, and Trump beams “Great move on delay (by V. Putin) - I always knew he was very smart!” Trump continues to doubt Russia’s involvement in the hacking — despite intelligence community assessments to the contrary — and Putin returns the favor by openly looking forward to a golden era in U.S.-Russia relations over the next four years.

But no personal relationship in the world can compensate for the dramatically divergent national interests that divide the United States from Russia. Although Washington and Moscow may find some accommodation in Syria on counterterrorism, Russia will not simply cower for the sake of maintaining a friendship with America’s next commander-in-chief. Just as likely as a detente or outright rapprochement is Putin testing the waters to see what he can get away with. Renewed separatist violence in Eastern Ukraine? It’s possible. Continued intransigence in the UN Security Council? Very likely. Picking and probing along NATO’s eastern border? Anything could happen.

Will Trump be as jovial with Putin when he insults the billionaire’s intelligence or does something that the Trump administration considers a stab in the back?  Will Trump’s reset with Russia be as successful as George W. Bush’s and Barack Obama’s?

3. Talks with North Korea: Democrats and Republicans disagree on many things, but most would tell you that the Obama administration’s policy on North Korea has been at best a continuation of U.S. policy failure and at worst a big stepping-stone to the permanence of the North as a nuclear weapons state. Trump hasn’t said much about North Korea other than labeling Kim Jong-un a “maniac,” but also a maniac who is capable enough of keeping North Korea’s generals in line. But we also know that Trump has an interest in the subject; according to Reuters, Trump actually requested a special intelligence briefing on Pyongyang’s nuclear weapons program.

Be on the lookout for something big, bold and unprecedented from the dealmaker-in-chief — perhaps an administration overture to the North Koreans that would include the dispatching of senior U.S. officials to Pyongyang in order to determine whether direct, bilateral negotiations would be worth the time and effort. As silly as this may seem at the present time, it wouldn’t be altogether unusual to see a businessman who thinks he can get the deal of a lifetime to explore the outlines of a comprehensive understanding with Pyongyang on the nuclear question. What that arrangement may entail (a verifiable dismantlement of the North’s entire program; an interim cap on nuke development and missile testing; the signing of a formal peace treaty) is anyone’s guess. But the doctrine of strategic patience may very well be replaced with a doctrine of strategic engagement.

4. GOP vs. Trump: The relationship between congressional Republicans and President-elect Donald Trump is being portrayed by GOP spokespeople as one of unflinching harmony towards a brighter, more conservative future. And yet it would be the height of naivety to think that this kumbaya moment will last. Because it won’t.

On everything from border security, deportation policy and immigration reform to a partnership with the Kremlin and the importance of defending the liberal international order, the Trump White House and its Republican colleagues in the House and Senate will be battling in some fashion this year. We could even see GOP infighting in the first few weeks of the new year when Trump’s cabinet nominees face grilling during their confirmation hearings. Instead of the usual Tea Party-GOP establishment-Democratic divides, we could see a Washington divided amongst Trump loyalists, fiscal conservatives, Democrats and GOP establishment types. This isn’t exactly a recipe for productivity in government.

5. The end of the two-state solution: Last week, Secretary of State John Kerry sent a disturbing, but accurate, message: without an end to Israeli settlement-building deep in the West Bank and East Jerusalem and an end to violence directed at Israeli civilians, the two-state solution will be dead and buried sooner rather than later. “The status quo is leading towards one state and perpetual occupation,” Kerry said, "And with this passive resignation, the problem only gets worse, the risks get greater and the choices are narrowed.”

If the Trump administration’s policies towards the Israeli-Palestinian conflict are at all similar to the views espoused by David Friedman, Trump’s nominee for ambassador to Israel, then the two-state formula that U.S. policy has been based on for the last five decades will indeed be dead. Any further action by the Security Council censuring Israeli settlement construction certainly won’t occur over the next four years. And Prime Minister Benjamin Netanyahu isn’t exactly in a giving mood towards the Palestinians; in fact, pro-settler parties in Netanyahu's coalition government are celebrating Trump’s tenure as the final nail in the two-state solution’s coffin. All of this will add up to more Palestinian disenfranchisement, more referrals from the Palestinian Authority to the International Criminal Court and greater radicalization on both sides of the 1967 line.