5 Ways America Can Improve Its Relationship with South Korea 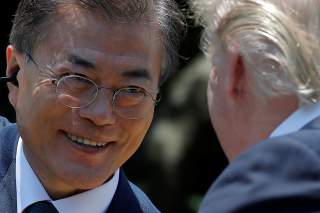 By most sober accounts, the recent meeting between the presidents of Republic of Korea and the United States went pretty well. At least for now, both sides look to continue to work on the issues that perennially dominate bilateral relations—North Korea and trade. That’s not enough.

Seoul is more than just another Washington ally. Along with Japan, South Korea is America’s anchor as an Asian power. Like the special relationship with Great Britain that moors the United States to the European continent, our bilateral relations with South Korea and Japan bind us to the Asia-Pacific region. Relationships that important are about more than nuclear threats and trade deficits. Enduring partnerships span the economic, political and cultural spheres.

Politically, Trump and Moon look like they are from Mars and Venus. However, they are also two leaders of vision who, like the unexpected odd couple, might well build trust and confidence in bilateral relations. All they need do is look to areas where their nations share natural cooperative interests.

Here are five agenda items primed for Korean-American engagement, issues where the two countries could act as a real global-leadership team.

Taking Action in the Arctic

South Korea lies outside the Arctic Circle. That doesn’t mean Seoul doesn’t care about what’s happening within the ring. In 2013, the Koreans received permanent observer status in the Arctic Council, the region’s principal multinational cooperative forum. Just what sparks Seoul’s interest in the polar region?. For starters, the Koreans build icebreakers and other ships that transit the region. Seoul also has a commercial interest in polar-maritime traffic, fishery stocks, energy, mineral extraction and environmental and climate concerns. For its part, the United States is Arctic superpower in name only. Washington has a lot interest in the Arctic and a serious to-do list, but not much infrastructure. There is value in the two countries teaming resources to advance their interests.

While the U.S. media concentrate on the domestic health-care battle, they often overlook the fact that America is a global leader in health diplomacy. South Korea has, of late, become more active in the field. Washington has not paid much attention. That should change. The two countries ought to look closely at how they could get a bigger bang for the health-diplomacy buck through joint efforts.

Understanding the Future of Work

Both the United States and Korea have advanced manufacturing economies. Washington and Seoul share a common interest in trying to understand how technical innovation from the internet of things—everything from robotics to artificial intelligence—will affect the workforces of the twenty-first century. A new hot topic in public policy, the “future of work” can potentially reshape everything from education to taxes. One commentator last year noted he got forty-eight million hits when he did a Google search for the word. Both countries are grappling with understanding where their workforces are headed. This conversation is not an invitation to think that governments are smarter than the power of free markets, which are the real instruments that create innovation and understanding. Sometimes what a thoughtful government can learn is how to stay out of the way or remove the constraints that enable individuals to shape their future. It’s the kind of conversation forward-looking governments should engage in.

Cooperation on cyberspace ought to be axiomatic among all America’s friends and allies. Still the United States and South Korea share a major concern about a super cyberbully: North Korea. America ought to be as close to South Korea on cyber as it is to the “Five Eyes” on intelligence operations.

South Korea’s contribution to multinational peacekeeping efforts has had its ups and downs. Americans have been waiting for a U.S. administration interested in reform and dealing with appalling abuses in UN peacekeeping operations. There is a space for the two countries to work together on a common agenda—if not making peacekeeping great again, then at least pushing the international community to back operations that are suitable and feasible, as well as efficacious and respectably managed.

Doubtless policymakers and the media of both nations will continue to focus on North Korea. But other officials are responsible for the five opportunities listed above, and they should be able to make progress even as other’s eyes are drawn to Pyongyang.

Now that Moon and Trump have finished their first date, the time has come to think about how to manage what hopefully be a protracted honeymoon. There are more than enough critical common interests to keep the relationship fresh. It is time to pick up the pace in bilateral contacts.