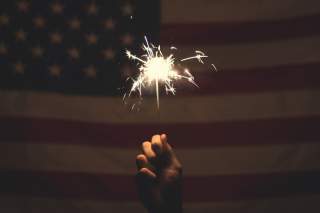 In all, this research suggests that—after a reminder of death, of course—voters might be more inclined to support a “charismatic, bold, self-confident” candidate. These are qualities Trump has in excess. Importantly, the candidate would also need to espouse the idea that America is “divinely ordained to defeat the forces of evil.” Perhaps it was no coincidence then that in his much-touted foreign policy speech on August 15, Trump emphasized this point about fighting terrorism: “we cannot let this evil continue.”

3. Take Me to Church

Demarcating the separation between Church and State is a solemn responsibility placed on the highest echelons of American government—the Supreme Court, for example. Yet it is the church down the street, a place much closer to home, where this boundary might be most meaningful come November 8.

In 2010, the journal Political Psychology published an important paper by Abraham Rutchick of California State University, Northridge. It was the result of an idea Rutchick wanted to test that ecclesiastical primes might influence political choice. As noted above, it has been shown that setting up polling stations in schools resulted in an increase in voters favoring school funding proposals. Similarly, Rutchick thought that holding voting in churches might prime more voters to support conservative causes and candidates. To study this idea he dove into the 2004 data from South Carolina’s sixth congressional district. In the end, the results were clear. Adjusting for precinct-level partisan composition, he found that the more conservative candidate did statistically better in voting precincts located in churches than in those located elsewhere—41 percent support in churches to 32 percent elsewhere, in this case.

Importantly, in broader follow-on studies Rutchick found that such primes only affected self-identified Christians. He explained, “ecclesiastical images have their impact by increasing Christian identity, which in turn activates Christian values and their implications for political issues.” Nonetheless, the full set of studies he performed led Rutchick to conclude that “churches as polling places could be advantageous to politically conservative candidates and to supporters of conservative positions on abortion, same-sex marriage, and other relevant issues.” These are candidates, in other words, that tend to be Republican.

A downpour on election day might result in a poor showing at the polls. After all, who wants to wait in long lines in the rain? But Republicans interested in boosting votes for their party on November 8 might instead want to worry about the weather a bit earlier in the year on July 4, America’s Independence Day. Here’s why.

In a 2012 working paper for Harvard Kennedy School, two researchers looked at Americans born between 1920 and 1990 to see if the number of rainy Independence Days during childhood influenced political choice. Their thinking was twofold. First, more rain-free Fourths might mean more patriotic festivities, more fireworks, more flags and more U.S.-themed hoopla. All of these things contribute to a sense of “national identity and a belief in the underlying principles supporting American society.” Second, more rain-free Fourths might also mean a stronger identity as Republican for all of the reasons cited in the 2011 flag-priming study. The results supported both ideas. At the sample mean age of 39, for example, the likelihood that an adult turns out to vote is increased by 0.88 percentage points for each rain-free Fourth of July in childhood. Meanwhile, the likelihood an adult identifies as Republican increases by 0.61 percentage points.

What does this mean for 2016? After all, there isn’t much that can be done about the weather on of Fourth of July now. Still, Republicans might do well to note that Arizona and Nevada contain six of the driest ten sites monitored by NOAA in the lower forty-eight states. Yuma, for example, gets barely over three inches of precipitation a year. Importantly, these states also could go either way in the election, with Trump now slightly ahead in Arizona and slightly behind in Nevada. If there is any residual priming from previous rain-free Independence Days, perhaps here is where Republicans should direct their resources. Of course, this would mean fewer resources for a state like New Hampshire, where Trump is currently getting soaked by Clinton but where Trump’s running mate nonetheless has spent time in the last week. Incidentally, New Hampshire also happens to be the home of Mount Washington, the site in the contiguous United States that sees the most precipitation each year.

5. Ask and You Shall Receive

The biggest challenge for Republicans and Democrats on election day may not be persuading whatever undecided Americans remain to favor one candidate over another. Instead, it may be getting people who already favor their side to vote at all. In other words, turnout may be the decisive factor come November 8. Here Sunstein and Thaler offer an intriguing and elegantly simple idea from their book Nudge: “It turns out that if you ask people, the day before the election, whether they intend to vote, you can increase the probability of their voting by as much as 25 percent!”

A strategy of asking already Republican-leaning voters on November 7 if they intend to vote tomorrow might yield more votes, more easily, at less cost than trying to persuade those leaning slightly left to vote Republican at the last minute instead. Moreover, Sunstein and Thaler point out that this prime can be accentuated by getting to the specifics—by asking people not just if they will vote, but when and where they plan to vote.

There is no perfect prime, no hypnotic cue that invariable persuades a person to vote one way or another. But, research is clear that subtle influences can and do nudge human thoughts and actions. If nothing else, an election strategy that is open to incorporating primes might offer a bit of solace to any Republicans currently dismayed by their presidential candidate’s faltering poll numbers, or even to those simply interested in supporting down-ballot GOP candidates. Of course, Democrats could also seek out primes to sway voters this November. But then again, their candidate is already leading in the national polls. All of them.