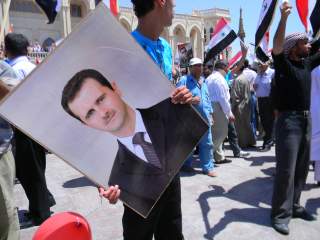 Two months into the Trump administration, it is hard to tell if there has been any discernible shift in U.S. strategy towards Syria. The new president's thirty-day deadline to the U.S. military for devising new plans to defeat ISIS in the Levant and beyond has come and gone—but we cannot easily tell from the outside how consequential that classified set of options may yet have been. In any case, as Joint Chiefs of Staff Chairman Gen. Joseph Dunford explained in a late February event at Brookings, that thirty-day plan was not intended to be the end of the story. In light of current conditions, where should President Trump aim next in regard to what has surely been the worst civil war of the twenty-first century, and in regard to the ongoing challenge of Takfiri/Salafist violent extremism?

Trump inherited a mess in Syria. Luckily, he also inherited battlefield momentum against ISIS. That is particularly notable in neighboring Iraq, where virtually all of Anbar province and half of Mosul are now liberated from the extremists, but it is partially true in Syria as well. ISIS still holds its “capital” of Raqqa, as well as some smaller towns in Deir ez-Zor and eastern Homs provinces, according to the ongoing excellent work by the Institute for the Study of War on this subject. Yet it has lost ground and the seat of its so-called caliphate in Raqqa is now largely encircled by opposition forces.

Still, given the witches’ brew or, as Gen. David Petraeus puts it, “the geopolitical Chernobyl” found on the Syrian battlefield today, things are a long ways from a success. In the short term, with Turkey and the Kurds at each other’s throats, there is not even a viable plan yet for liberating Raqqa. Even if that issue can be solved, and Raqqa liberated, ISIS may retain smaller sanctuaries elsewhere in the Levant and the broader region. And even if ISIS itself is eventually reduced as a threat, the Front for the Conquest of the Levant (a.k.a. Jabhat al-Nusra, previously Al Qaeda) may remain a problem.

Finally, even if both ISIS and the Front for the Conquest of the Levant are somehow weakened throughout Syria in coming months, the potential will remain for a resurgence of violent extremism absent a stable solution to the civil war. Working with Russian president Vladimir Putin and Bashar al-Assad to achieve that objective cannot, of course, be the entirety of the answer. The Syrian president simply has too much blood on his hands to be a stabilizing and legitimate ruler of all of Syria ever again. He is despised by large segments of the Sunni Muslim majority in Syria, who have seen their neighborhoods barrel-bombed, shelled and their populations deprived of food and medical care—as well as schools and jobs—for six years. We might temporarily defeat ISIS, only to see Jabhat al-Nusra or other extremist groups benefit from the bitterness and disenfranchisement of much of the Sunni population. Another wave of jihadism would surely follow, whether under the same or a different name.

The only way to think logically, even about the short term, the liberation of Raqqa, is therefore to think first about what longer-term political strategy we are pursuing. Replacing Assad as president of the country, however horrible he has been, does not seem to be in the cards. Some form of self government for the Kurds and Sunni Arabs is the only realistic answer. One option might, in theory, be a confederal system by which the whole country is divided into such zones. In light of Assad’s conquest of Aleppo and Trump’s disinterest in mounting a major new effort against Assad, however, a more realistic and minimally acceptable alternative could be the creation of several autonomous zones within an otherwise still-centralized state (not unlike how Iraqi Kurdistan has often functioned). Once those autonomous zones are established, humanitarian and reconstruction aid could be provided to them directly by the international community. International peacekeepers could help them build local police forces, like lightly armed versions of the Iraqi peshmerga, and keep an eye on them to be sure they did not ship weapons to the PKK in Turkey or attempt a pointless march on Damascus to attempt an overthrow of Assad.

The international peacekeepers could include Russians in the country’s west so that Moscow could preserve its core equities in the country. Turks could remain in the north where they are now operating. Arab and other Muslim-majority forces could patrol along the internal demarcation lines. Americans and other NATO troops could help with overall command and control, as well as logistics and ongoing counterterrorism operations. The region in and around Raqqa itself might be administered under a trusteeship, as proposed by James Dobbins, Phil Gordon and Jeff Martini.

As noted, foreign assistance for this reconfigured Syrian state should be provided primarily to the autonomous regions themselves. That would enhance the international community’s leverage with the new, regional governments. They could demand that Syria remain whole and undivided as a condition for future aid, with no attempts at secession. For Assad to see any such aid from European, American and Gulf states for regions that he or his associates controlled, the government would have to call off attacks on the opposition, and Assad would have to agree to a plan to reduce his own future role in the country’s central governance. Full aid flows to the parts of the country he controls now could only occur after his departure, though some aid could flow sooner to help incentivize Assad and Russia to accept this overall approach for ending the war and defeating extremists.

Many Syrians will not like the idea of a confederal nation, or even of a central government controlling half the country with the other half divided into perhaps four–six autonomous zones. But such arrangements need not be permanent. The deal that ultimately codified the autonomous zones could include a provision that, ten years hence, a constitutional convention would be held to consider whether a stronger central government should be restored.

This finally brings us back to the immediate problem: how to liberate Raqqa. Right now, our de facto strategy lacks needed firepower and manpower. Moderate Arab opposition forces in the east of Syria lack the latter. Kurdish forces have some of the latter but not enough of the former, largely because Turkey has objected to our providing weaponry. The Turks themselves have a meaningful, but not decisive, military presence on the ground in Syria. So far, Assad’s forces are showing signs of trying to push out east, but they are still limited in their manpower—even once Russian forces and Hezbollah and other largely Shia militias are added into the equation. American and coalition airpower is important in support, but cannot, itself, take the lead on liberating Raqqa and other cities from thousands of entrenched ISIS fighters.

The solution to this conundrum has to involve providing arms to the Kurds, whether Turkey loves the idea or not. It should also involve greater efforts to cooperate militarily with the Sunni tribes of Syria's east, as suggested recently by Fred and Kim Kagan, though that may not suffice as a strategy either—hence emphasis on also collaborating with the Kurds. In that regard we can, I believe, do a great deal to attempt to soften Turkish opposition:

• As noted, declare that we seek autonomous zones and not independent Syrian statelets, and rally key allies to support this same vision of a future Syria.

• Insist that there be at least two such Kurdish autonomous zones so they do not join up and seek independence.

• Support the idea of a long-term Turkish military presence inside Syria, even after the liberation of the east from ISIS, in large part to allow Ankara to keep an eye on the Kurds.

• Commit some number of American forces to that region over the longer term as well, to help monitor the movement of people and impede the movement of arms across the Syria-Turkey border.

• Clarify to Kurdish forces that any weapons provided to them (except small arms) are being loaned, not given. Reconstruction aid would only be provided in full to the Kurds when the heavier weapons were returned, after the defeat of ISIS. This buyback concept needn't work perfectly to make an important difference.

The above plan of action isn’t perfect and can probably be improved upon. But the key point is that we need to introduce this kind of broader political-military vision, and logic, into our thinking about Syria—even to achieve the immediate purpose of the liberation of Raqqa. If there is one thing we should have learned by now in the Middle East, it’s that military successes built on weak political foundations won’t last—if they can even be achieved in the first place.