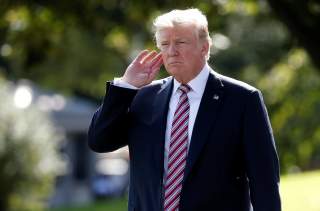 This is arguably the strangest North Korea crisis ever. The conventional wisdom is that it is the most dangerous yet. But the risks of military action are well-known and enormous, so kinetic options are still rather unlikely. Instead, what strikes me the most about this time around is the interventions of the American president. Not only has Donald Trump’s comments worsened tension rather than soothed it, they are often made in an off-the-cuff, gleefully belligerent manner. This combination creates the bizarre outcome of a U.S. president mixing the frightening (threats of nuclear war) with the comedic (it is all just Trump being Trump, the boyish bomb-thrower). This peculiar disjuncture of the ultra-serious and the childish is so unnerving that it is firing much of the social media debate about this particular crisis. Once again, as so often with Trump, the whole thing is becoming about him rather than events themselves.

It is genuinely hard to know what to make of this, of just how close we are to serious conflict. Usually the American president plays a calming role regarding North Korea, because it is an extremely dangerous state with a long history of provocation and gangsterism. President Bill Clinton tried to normalize it and pull it into the post–Cold War world (however haltingly) through the Agreed Framework and a visit by the U.S. secretary of state at the time, Madeleine Albright. Barack Obama was famously cool, even letting North Korea’s racism bounce off. (The North Korean Central News Agency [KCNA] referred to him as a monkey.) Even George W. Bush who provocatively placed North Korea on the ‘Axis of Evil’ in 2002 eventually came around to dealing with Pyongyang in the Six Party Talks in his second term. At no point did Trump’s three predecessors speak as explosively as he is doing. Indeed, it seems like Trump is talking as KCNA does. Trash talk for trash talk. This has been Secretary of State Tillerson’s defense of the president’s language.

As I have suggested elsewhere, there seem to be five possible explanations for Trump’s unique rhetoric. How this crisis unfolds in the next six months—it seems primed to roll on for awhile yet—will depend on why exactly Trump is talking about North Korea in a way no U.S. president ever has before:

1 - Trump Means It, but as a Wheeler-and-Dealer He Really Wants a Deal

This is what the Trump administration would have us believe: All the psychological explanations are wrong. The president simply means what he says. Trump is at the end of his rope. Previous presidents have buck-passed this issue until it landed on his desk, and now he must take action. If this is true, Trump is almost certainly bluffing in search of a deal and hoping his bluff will not be called. If he is actually rational in talking this way, i.e., if he genuinely means it, then he is also rational enough to understand just how great the risk of war is and does not want one. This is Trump as he likes to present himself—the tough negotiator willing to go to the brink to get a good deal.

2 - Trump is Baiting the North into a Casus Belli Provocation

This is the most frightening possibility. Here the reason for Trump’s outlandish threats is to bait North Korean leader Kim Jong-un into some kind of extreme provocation which could serve as justification for U.S. military action. If so, then Trump has already decided that conflict is either inevitable or that it is preferable to a worsening future. There is a logic here: North Korea is a dangerous nuclear weapons state today which will be an even more dangerous nuclear-weapons state tomorrow, so it is better to fight today than tomorrow. A similar logic is sometimes used to explain Germany’s decision to fight in 1914. Time was on the side of the Russians, and it was better to fight them sooner than later.

3 - Trump is Pushing Back on His Own Staff

This is a domestic politics interpretation, popular on cable news with its intense interest in the staffing ups-and-downs of the administration. Trump is simply acting out. He clearly dislikes being told what to do by his staff, especially Chief of Staff John Kelly. He instinctively resents any outside direction and enjoys being a bomb-thrower. This explains why he keeps ad-libbing explosive, unnecessary commentary like “fire and fury” or “totally destroy” North Korea. He is pushing back against Kelly and his own staff who have warned not to speak this way.

4 - Trump is Diverting Attention from His Mounting Scandals

This is another cable news-domestic politics explanation, especially popular on the political left. Trump is flirting with a diversionary war. Robert Mueller’s investigation into Trump’s Russia links in particular is accelerating, with the looming indictment of Paul Manafort. This seems like the most cynical of all hypotheses, but it also has the promise of easy change. If Trump is as innocent as he say he is, there is no need to change the subject to North Korea.

One might call this the Daniel Drezner theory of Trump’s behavior. Drezner, a political scientist who writes at the Washington Post, has repeatedly argued that Trump’s administration is characterized by an amateurishness that cripples it. In my experience in Korea, this argument is locally persuasive. Many of my acquaintances worry that Trump is simply mentally unhinged.

The most alarming of these is option two, that Trump actually believes a war is more or less inevitable. The others suggest that much of the crisis is artificial, ginned up by Trump’s own language for other reasons. The worry is that the more Trump talks, the more he is talking himself, and Kim Jong-un, into a corner, where they feel must act. Even if he is not baiting Kim Jong-un—and it becomes harder and harder to avoid that conclusion with every new tweet—it may happen anyway. We are sliding toward a self-fulfilling prophecy.

Image: U.S. President Donald Trump listens to a question before speaking to reporters as he departs for Bedminster, New Jersey, from the White House in Washington, U.S., September 29, 2017. REUTERS/Joshua Roberts​