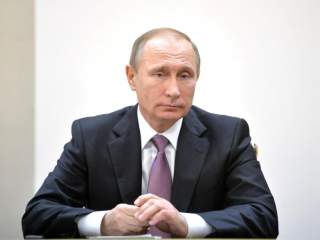 How are we to make sense of Vladimir Putin’s announcement that the bulk of the Russian expeditionary force in Syria is to be withdrawn over an as-of-yet undefined period in the coming weeks and months? Is this a Kremlin victory lap, or a way to extricate Russia from what might prove to be a dangerous and costly mistake? Here are five ways to view Putin’s surprise.

The most straightforward explanation, based on an assessment that the Russian expeditionary deployment, which began last September, was always intended to be a short-term operation. At the time, the Kremlin made no grandiose promises about what its active involvement in the Syrian civil war would bring—no boasting about how the Islamic State would be destroyed or statements about restoring control over all of Syria to the regime of Bashar al-Assad.

Like the Russian intervention in the Donbass the year before, Putin moved to act swiftly in Syria at a time when most Western experts were confidently predicting that Assad, finally, had reached the end of his rope and that the opposition would soon be in Damascus. The Russian military presence in Syria was supposed to “assist” the Assad regime, and it has done that. Six months later, in March 2016, no one is talking about how Assad is about to fall; the Syrian government forces and their various militia allies have regained the initiative on the battlefield, taking back key villages that strengthen their ability to keep control of the parts of Syria they occupy while degrading the capabilities of the opposition.

Moreover, the political dynamic has changed. The Syrian opposition, the United States, most Western governments and our Gulf allies were all insistent that Assad’s departure was a necessary precondition before any negotiations could begin with the government about a transition. Now, despite the use of face-saving rhetoric, the various participants in the Syrian political process have come to accept that Assad has a certain degree of staying power. In pulling this off, Putin again demonstrated that the Kremlin will be loyal to its friends and partners—and that it has the capability to marry military and political objectives in a successful limited campaign.

2) Quit While You’re Ahead

Russia’s intervention dramatically changed the image of the Kremlin not only in the region but around the world. It demonstrated that the military reforms and increased spending of the last several years have indeed borne fruit. The Russian military showed that it was capable of launching and sustaining an intervention outside of the former Soviet Union, and that Moscow could change facts on the ground in Syria through the application of its power, no matter what Washington, Brussels, Riyadh or Ankara wanted. The Syria intervention showcased some new Russian capabilities and put the world on warning that the United States is not the only country that is capable of projecting hard power in different parts of the world.

But having sent that message, Moscow gains no benefit from continuing to repeat it, and indeed, as time goes on, more of the potential flaws and weaknesses in the Russian military establishment would become evident. It was disturbing when the Russian navy successfully launched cruise missiles from the Caspian flotilla to strike targets in Syria—but the shock of that achievement was marred by clear signs of technical failure. Russia has also been able to intervene so far in Syria and harvest the low-hanging fruit of pushing back the opposition’s advance at a relatively low cost and without sustaining many casualties. If Russia were to proceed to the next stage, of beginning to retake large areas that have been held by the opposition or the Islamic State for years, it might not be able to do so with the same degree of ease.

Given that the start of peace talks gives Russia the perfect hook to end its operation “with honor” and on a high note of success, it may have seem prudent to take advantage of that opportunity rather than risk humiliating setbacks in the future. It also helps, frankly, to save money, because as the operation continues, so does the drain on the Russian treasury.

When the Russians began to deploy to Syria in earnest last fall, the response among some of the sponsors of the Syrian opposition was to search for ways to turn Syria into another Afghanistan for Russian forces—by increasing the capabilities of the rebel forces to be able to target Russian airpower and to draw the Russians into increased land engagements—thus raising costs in terms of both blood and treasure. This did not quite materialize due to cooler heads thinking through the ramifications of promoting a proxy war, say, between Saudi Arabia and Russia. The return to reality after the shootdown of the Russian jet by Turkish Air Force fighters—and the prospect of a general great-power clash over Syria—also helped to tamp down such talk. Moreover, when Turkey made noises last month about crossing into Syria to create a “safe haven” and sent hints that it would welcome Saudi participation in such an operation, Riyadh (and Washington) signaled a lack of enthusiasm.
Yet Putin is not unmindful of how a long, protracted intervention can degrade military capabilities and lead to popular discontent. He has been able to observe firsthand how mission creep on the part of the United States—how moving from the immediate military missions of overthrowing the Taliban in Afghanistan and ensuring Iraq had no weapons of mass destruction to broader, open-ended efforts to transform societies not only provoked increasing resistance but also drained U.S. power.

If the regime in Syria has been stabilized and re-equipped, and now is able to fight with manpower augmentation from Iran’s Revolutionary Guards and Hezbollah, then there is no need for the Russians to stay. Indeed, an announced Russian withdrawal suggests Putin may be following the playbook utilized by the USSR after it withdrew its forces following fruitless years of fighting in Afghanistan: strengthen a local proxy and ensure it has the tools to preserve its existence. It bears remembering that the regime of Mohammad Najibullah in Afghanistan did not collapse in the face of mujahideen resistance when the Soviets withdrew, but endured until the collapse of the Soviet Union cut off remaining aid and military equipment. This could be the same approach now for Syria: let Assad retain control over his part of Syria and make sure that he cannot be dislodged.

4) An Overture to Saudi Arabia

The prospect of a clash with the Saudis over Syria is not something that Moscow would welcome. Indeed, Russia would like to come to a more pressing agreement with Riyadh on stabilizing world energy markets so that prices can recover and the Russian budget and welfare funds have a chance to be replenished. A Russian withdrawal from Syria signals to the Saudis that, having saved their ally from being overthrown, Moscow remains open to a negotiated settlement—based on some degree of decentralization and creation of a unity government—that would address some of Saudi Arabia’s concerns and interests. By not fighting for Assad to the bitter end, but instead withdrawing after Assad has been stabilized, it creates conditions for a compromise settlement. Given that oil ministers are set to meet in April to see whether a workable production freeze is viable—allowing for prices to have some chance to recover—the timing of the announcement could be interpreted as an overture to Riyadh.

Finally, Moscow’s announcement, which some believe caught the Syrian government by surprise, notwithstanding subsequent statements that everything was being coordinated between the Kremlin and Damascus, might be interpreted as Putin’s warning to Assad and to others hoping for Russian support: the well is not limitless.

Assad’s willingness to negotiate a compromise settlement began to wane as Russian firepower changed the course of events on the battlefield. Perhaps the Kremlin wants to remind Assad that he does not have a blank check from Russia. Again, the Russians seem to draw comparisons with the recent experiences both the Bush and Obama administrations have had with Iraqi and Afghan leaders, who always wanted to rely on U.S. support even when they were uneager to follow American dictates or take the steps Washington insisted they needed to do. The Russians have shown they will act; but Assad is not “too big to fail.” From Moscow’s perspective, the intervention has given Assad a fighting chance—but ultimately, if he fails to make use of it, the failure is on his head, not Moscow’s.

In the days and weeks ahead, we will see to what extent Moscow actually withdraws its expeditionary force. It is important to note that Russia will retain its beachheads in Syria for the projection of naval and air power, allowing the Kremlin to quickly surge back if its interests or perspectives change. But the Russian announcement suggests that Putin views the operation in Syria, not as an end in itself, but as part of its larger quest to restore its great power position in the world—and he may have concluded that it has run its course.