5 Weapons of War That Should Never Be Used 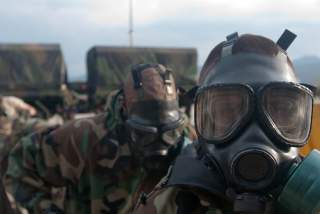 Most weapons of war, from pistols to fighter planes, are generally thought of as legitimate and — considering they are meant to kill — fairly humane tools of war. These weapons can be used in a way that their ability to kill and maim is focused on an individual, legitimate target, whether it be an enemy combatant, vehicle, or facility. Such weapons are also designed to kill relatively quickly, if for no other reason than efficiency.

Then there are weapons, indiscriminate and inhumane killers, that have the potential to strike at noncombatants and even affect human civilization on a global scale. There are also weapons that inflict agonizing injuries leading to prolonged suffering and death.

Some of these weapons of war are so terrible they should never be used. Most have been banned by the international community, a positive development for which humanity doesn’t give itself enough credit. Still, their specter lingers due to the possibility of their use by rogue nations or terrorists.

Here’s five weapons of war that should never be used...

Nuclear weapons are the most dangerous weapons on Earth. The immense destructive power of nuclear weapons, combined with their sheer numbers, makes them the only weapons capable of affecting human civilization on a global scale.

Invented during World War II by the scientists of the top secret Manhattan Project, the first nuke was tested at Alamogordo, New Mexico in 1945. Nuclear weapons have only been used twice in anger, against the Japanese cities Hiroshima and Nagasaki.

The nuclear arms race of the Cold War dramatically ramped up not only the explosive yield of nuclear weapons but also their numbers. The first atomic bomb dropped at Hiroshima was roughly 18 kilotons, or 18,000 tons of TNT in explosive yield.

The end of the Cold War has shrunk the worldwide total by nearly two-thirds, yet there are still enough deployed weapons to kill hundreds of millions of people.

The explosive power of nuclear weapons is only one aspect of what makes them so deadly. Radiation released by nuclear weapons is dangerous not only in the short term, irradiating survivors near or downwind of the detonation, but also contaminating crops, livestock, infrastructure, energy facilities, and other necessities of modern civilization. These areas could be dangerous to humans for tens, if not hundreds or even thousands of years.

In the case of nuclear weapons, there is a third reason they should not be used. In 1982, a study commissioned to examine the environmental effects of a nuclear war found the injection of soot and other particles following a nuclear war would have an effect on the global climate, cooling temperatures worldwide and leading to so-called “nuclear winter”.

VX is a synthetic organophosphate compound not found anywhere in nature. First synthesized in 1952 by a British chemist researching pesticides, VX is one of the most lethal substances on Earth — a mere ten milligrams of it will kill.

A person can come into contact with VX by inhalation, ingestion, or skin absorption. Symptoms manifest within seconds if inhaled,  but may be delayed by up to 18 hours if exposed via skin contact.

VX kills by interfering with an enzyme that regulates the nervous system. A person exposed to VX dies from muscle exhaustion, as muscles tire and and the body is unable to sustain breathing.

VX is a persistent nerve agent designed to remain in an environment for days to months, depending on the local temperature. As such, it is an effective area denial weapon. Amber colored and odorless, it is difficult to detect. VX’s viscosity, similar to motor oil, combined with its ability to kill in minute concentrations makes it very difficult to properly decontaminate surfaces and personnel.

VX use in wartime has never been confirmed, although the Centers for Disease Control states that it might have been used by Iraq in the Iran-Iraq War. Authorities believe the Japan-based Aum Shinrikyo cult killed 20 dissidents with VX. A spate of tourist deaths in Thailand between 2009 and 2011 may have been caused by organophosphate pesticides, with victims displaying symptoms similar to VX poisoning.

VX is banned to signatories under the Chemical Weapons Convention.

Sarin is a synthetic organophosphate compound similar to VX. Equally deadly, there are key differences between the two chemical weapons that justified maintaining stocks of both.

Like VX, Sarin is not naturally found in the environment and was originally meant to be a pesticide. Developed in 1938 by German scientists, the name itself is an acronym derived from the first letter of each of the scientists who discovered it.

Sarin’s lethality gave it obvious advantages as a weapon. Like VX, victims can be exposed to Sarin through inhalation, ingestion, or skin absorption. Sarin also kills in a manner similar to VX, leading to a loss of muscular control and respiratory failure.

Symptoms of Sarin exposure manifest quickly, and can kill within ten minutes. It is considered a non-persistent nerve agent, breaking down more quickly and easily in the environment than VX. An army can more quickly occupy a Sarin-contaminated area than one doused with VX.

Sarin is reported to have been used by the government of Saddam Hussein against Halabja, Iraq, in which up to 5,000 civilians died. In 2013, the Assad regime used Sarin against rebel-held territories in the Syrian Civil War.

Sarin gas is not difficult to synthesize: in the mid-1990s, the Japan-based apocalyptic cult Aum Shinrikyo cult manufactured Sarin and used it in two attacks. The first attack in Matsumoto, Japan 1994 killed seven and injured 600, while a second, much larger attack on the central Tokyo subway system killed 13 and injured more than 6,000.

Sarin is also banned to signatories of the Chemical Weapons Convention.

Perhaps the most frightening class of weapons are so-called biological weapons. The idea of invisible, often living weapons indiscriminately spreading death and disease is a terrifying one.

As the name implies, biological weapons are organic in nature. An example of a biological toxin is Ricin, a poison made from castor plant seeds. Ricin inhibits cellular production of proteins, eventually causing death. Microorganism-based biological weapons include bubonic plague and anthrax.

Unlike other weapons on this list, biological weapons have been used for centuries. In 1346, the Tartar Army catapulted plague-infected bodies into the walled city of Kaffa to infect its defenders. In 1763, British troops delivered blankets from smallpox victims to the Delaware indians, and in the 1930s and 1940s Japan released a number of deadly pathogens on mainland China.

Part of the fear around biological weapons is that they do not discriminate between military personnel and civilians, nor are they restrained by geographical boundaries. A biological weapons attack could easily backfire, as a disease or blight might cross the border and attack the user.

Biological weapons are banned under the Biological and Toxins Weapons Convention of 1972.

In 1859, solar astronomer Richard Carrington witnessed a violent and powerful coronal mass ejection on the surface of the sun. By the next day, the energy released by the solar storm, the largest ever recorded, had travelled across the solar system and struck Earth.

The resulting geomagnetic storm on Earth triggered displays of the aurora borealis as far south as Cuba. The storm also played havoc with the primitive electrical devices of the time. Telegraph and electrical wires caught fire, and telegraph operators received shocks while operating their equipment. Still, the damage was limited: in the 19th century, electrical devices were still new and not central to the needs of modern society.

The next time such an event happens, the damage will be much worse. Electricity is now the lifeblood of modern society—without it computers cease to function, the Internet disappears, food deliveries stop, and all forms of transportation grind to a halt. Modern civilization is instantly reduced to a preindustrial level—minus the preindustrial means of survival.

An electromagnetic pulse attack has been hyped by pundits and security experts as an imminent threat to not only the United States, but the entire world. EMP attack scenarios usually involve a nuclear device detonated in space above the United States, the attack carried out by various actors, including terrorists, North Korea, Iran and Russia. An EMP weapon’s effectiveness is in proportion to the energy released, which is why most scenarios envisage using a nuclear weapon.