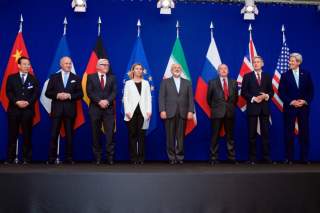 The Iran agreement is a historic achievement that rallies the full weight of the major global powers to shut off Iran’s pathway to a nuclear weapon for ten years or more. Few votes in Congress will be as consequential as the one on the Iran nuclear agreement. This agreement represents the best chance to make sure Iran never obtains a weapon and the best chance for Congress to support American diplomacy—without taking any options off the table for this or future presidents. The deal deserves Congressional support. Opponents of the deal have been scathing in their critique. While there are aspects of the deal that merit close review, many of these attacks just don’t stand up to scrutiny.

1) The deal ensures that Iran will get a bomb, sparking nuclear proliferation across the Middle East. The deal takes Iran off the path to a bomb and keeps all U.S. options on the table if Iran cheats. Without this deal, UN inspectors would be kicked out, and Iran would again be within weeks or months of a bomb, with all of its centrifuges spinning and its enriched-uranium stockpiles growing. Without the deal, Iran has enough uranium for ten bombs right now. With the deal, it will immediately have less than what it needs for one bomb. Under the deal, Iran also agrees to the International Atomic Energy Agency (IAEA) Additional Protocol, so it is bound to not producing nuclear weapons. If it chooses to try, all the options available today—including military action—will be available to the U.S. president in five, ten, fifteen or even thirty years.

2) The United States could have held out for a better deal. This is a strong deal, negotiated between the major world powers and Iran. If the United States walks away, the hard-won international consensus on current sanctions would crumble. Russia and China would reopen trade with Iran, circumventing American and European sanctions. Inspectors would be kicked out, and Iran would have no effective restrictions on its nuclear program.

3) Allowing inspections within twenty-four days gives Iran enough time to hide/dispose of nuclear material. Iran’s entire nuclear supply chain will be under 24/7 surveillance and monitoring. IAEA inspectors will have the right to visit any part of that supply chain immediately. If suspicious activity is detected elsewhere in Iran, Tehran must allow international inspections within twenty-four days. Disposing of nuclear material is different from disposing of illicit drugs or murder weapons: Nuclear materials leave traces that endure for thousands of years. The U.S. intelligence community and IAEA nuclear inspectors are fully confident they can detect nuclear activities well beyond twenty-four days.

5) There is a better option to a negotiated settlement. The only viable alternative to diplomacy is an eventual military strike. And if a strike is successful, this would likely set Iran’s nuclear program back by only about two or three years—far less than the deal. After a strike, Iran would likely make a dash for a bomb by reconstituting its nuclear program in even-more-secure facilities. The global consensus on sanctions against Iran would collapse, and Tehran would end up with a nuclear-weapons program and de facto sanctions relief—the worst of all outcomes.

6) This is bad for the security of Israel, and Israelis are united in opposition to the deal. The agreement is good for Israel and its national security. It blocks Iran’s pathways to a nuclear weapon for a longer period of time than any other available option and commits Iran to permanently renouncing nuclear weapons under IAEA inspections. Should Iran cheat or change its mind in the future, all American and Israeli policy options—including military action—remain open and will be improved with better intelligence gathered under the deal. Israelis are not united against the nuclear deal, as Prime Minister Benjamin Netanyahu claims. Numerous Israeli national-security officials—from the former heads of Mossad and Shin Bet to the former deputy national security adviser and former deputy director-general of the Israel Atomic Energy Commission—have been supportive of the agreement. Without an agreement, the sanctions regime will crumble, and Iran will be free to do as it pleases—leaving Israel far less secure.