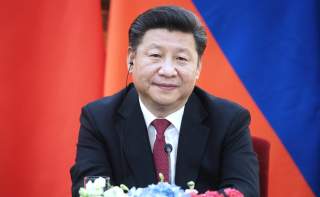 If there’s a moment that should give Americans pause, it is Donald Trump, real-estate mogul and international ingénue, meeting with Chinese president Xi Jinping, son of Mao Zedong confidante and victim of the Cultural Revolution, who climbed atop the world’s biggest political heap. Xi knows as much about Middle America as the U.S. president, having once spent time with a typical Midwestern family.

President Trump does not appear to be a man who devotes much time to preparing. But much depends on him learning about both China and Xi, particularly what motivates them. Forget Russia for a few days. The most important bilateral relationship in the world is that between the United States of America and the People’s Republic of China.

The starting point should be to hire a few people to staff the State Department and other agencies. No secretary of state, no matter how talented and knowledgeable, can manage U.S. foreign policy alone. And the U.S.-China relationship is particularly complex.

Washington needs a strategy to deal with Asia’s rising power. Priorities must be set, trade-offs need to be evaluated and deals should be offered. Chinese responses ought to be predicted and gamed. Appropriate means must be developed to advance serious ends.

Secretary of State Rex Tillerson isn’t going to draft the relevant memos. President Trump certainly won’t do so. And no one should want Steve Bannon, who already predicts war with China, to do so. Someone who knows something about China and Asia needs to bridge the gap between the State Department’s permanent employees and the secretary.

If the administration knows that it won’t be ready, then it should postpone the summit. Xi will be prepared. And he will be backed by a bureaucratic phalanx. Beijing will have an agenda and a strategy to advance its interests—so must Trump and company.

First, the administration must recognize that it can’t “win” on every issue. What is most important to the president? Limiting Chinese exports, defenestrating North Korea’s Kim Jong-un, deterring Beijing’s truculent maritime practices, raising Taiwan’s profile, restricting the Xi government’s economic advance in Africa or something else? Treating everything as if it is essential means that nothing is essential. Talking about everything means nothing will be decided.

Second, confrontation and military threats are likely to end badly. The U.S. armed forces are far more powerful than the People’s Liberation Army, but China has far more at stake in its neighborhood and therefore is willing to spend and risk far more to protect its interests. Moreover, Xi and the rest of China’s leadership direct a rising, nationalistic power not inclined to be bullied. President Trump should review the experience of a president he admires, Andrew Jackson. Washington can—and should—communicate its willingness to back vital interests with force, but do so “diplomatically.”

Third, the president needs to learn the art of diplomacy, and quickly. China might moderate how it pursues its territorial claims in the Asia-Pacific region, but will require something in return. Beijing is irritated with Pyongyang’s behavior, but to be convinced to apply greater pressure requires the United States to address the China’s interests and concerns. Demanding, which the administration often does, is different than persuading, which is actually necessary when dealing with a great power like China.

Fourth, President Trump should separate the interests of the United States and its allies, as well as distinguish between essential and peripheral concerns. Allies should be a means to an end, the defense of the United States. Washington shouldn’t protect other nations as an act of charity, especially against a nuclear-armed power. Moreover, America’s principle interest in, say, Japan and the Philippines is preserving their independence, not their control of unimportant and contested islets. Not much should be treated as worth war with the Chinese.

Fifth, the president should adapt U.S. policy in expectation that friendly states will do far more on behalf of their own interests. If the Philippines wants to go ship-to-ship with the Chinese (as it has done in the past and likely will do in the post-Duterte era), then it needs an effective navy, rather than relying on America’s fleet. Japan needs to be willing to employ the navy that it has. Changed circumstances warrant changed policies.

Sixth, the president should recognize that cheap imports are as much a benefit as expensive exports. Average folks, at least those not living on New York City’s Fifth Avenue, benefit from a lower cost of living. Exporters also do better when they purchase intermediate goods for less. And unless the Chinese start burning the dollars they collect for their exports, which actually would be great from an American standpoint, the money will come back to the United States as purchases or investments. There are issues worth bilateral negotiation, such as Chinese barriers to U.S. investment, but attempting to “balance” trade is simultaneously quixotic and harmful.

Seventh, it is vital to develop a generally civil and cooperative U.S.-China relationship. Differences are inevitable but conflict is not. Nevertheless, established, status-quo states usually hate to yield to rising powers. Beijing does not threaten the territory, population, wealth, or liberty of the United States. Rather, China is contesting American dominance along its border. That may be advantageous for the United States, but is hardly a vital concern worth war. And there is no reason to believe the participants would stop at one fight. France and Germany fought three times between 1870 and 1945. It took two horrendous global wars to determine Berlin’s place in the international order. Washington and Beijing should not go down a similar road.

The first meeting of the presidents from the world’s two most important nations is a major diplomatic moment. The leaders may not forestall future disputes, but hopefully they will create a process and relationship which make future solutions possible. To succeed, President Trump needs to become something he’s never been—a knowledgeable statesman. Much depends on his ability to surprise the rest of us with his transformation.

Doug Bandow is a senior fellow at the Cato Institute and a former special assistant to President Ronald Reagan. He is the author of Tripwire: Korea and U.S. Policy in a Changed World and coauthor of The Korean Conundrum: America’s Troubled Relations with North and South Korea.