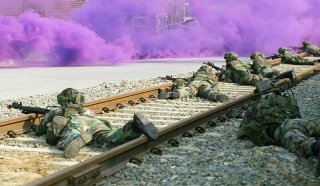 The relentless barrage of North Korean ballistic-missile tests (twelve already this year), and a matching endless barrage of op-eds proposing solutions, point to a new urgency for resolving the North Korea problem. Yet it is an issue that has eluded the best efforts of four U.S. presidents—from Bush to Obama—over the past twenty-five years.

Driving the new level of concern is the frenetic pace of Pyongyang’s efforts to obtain an operational intercontinental ballistic missile (ICBM) that could reach the U.S. mainland. This is unlikely to occur before the early 2020s. The mid-May testing of North Korea’s new Hwasong-12, believed to be a smaller version of the KN08 mobile ICBM, was the first time the North tried to land a reentry vehicle, and the Hwsong-12 may have a 2500 mile range, long enough to hit Guam.

Developing an operational ICBM involves complicated physics and difficult to obtain components. Nonetheless, it should be assumed that they will eventually obtain such a capability, which may become part of a robust land-, air- and sea-based dyadic nuclear arsenal, including submarine-launched ballistic missiles (SLBMs) that could be launched from North Korean submarines operating in the Pacific Ocean.

This raises a troubling question. One can understand why, after watching U.S. efforts in Iraq and Libya, Pyongyang might want a few nukes as an insurance policy against a U.S. attack. But why this inordinate effort to build a sophisticated land-and-sea nuclear dyad, already possessing some ten to twenty warheads, and producing enough fissile material to have fifty to one hundred by 2025?  It is possible Pyongyang thinks it could threaten—or even win—a limited nuclear war aimed at pushing the United States out of the Korean Peninsula? At a minimum, obtaining an ICBM capability could embolden North Korea to pursue more reckless provocations and/or the sale of weapons of mass destruction to other nations and terrorist groups for much-needed cash.

The other side of the debate is an argument for deterrence. Even with an ICBM, Pyongyang, whose priority is regime survival, would not commit suicide. Thus, deterrence could still hold. Perhaps. But this assumption rests on dubious assumptions: that the North Korean leadership will share the same concepts of deterrence dynamics as U.S. leaders; that nuclear stability will hold during a crisis; and that North Korea’s national-security decisionmaking process is necessarily disciplined, rational and effective.

U.S. policies have been aimed at preventing such a predicament from being realized. But despite twenty-five years of consistent U.S. policies focused on multilateral dialogue, a comprehensive approach to denuclearizing the Korean Peninsula and an ever-improving U.S.-South Korea alliance, the North Korean nuclear threat to the region and to the U.S. homeland is accelerating.

Time is not on our side. Predictions of regime collapse have come in waves: at the end of the Cold War and loss of Soviet subsidies in 1991; after founding president Kim Il-sung died in 1994; amid grave famines in the mid-1990s, during which a million or more North Koreans starved; after Kim Jong-il died in 2011. All have proven wrong. Though an anxious Kim Jong-un has murdered dozens of perceived threats or rivals—including his uncle and brother—there is no evidence of looming instability in the Kim dynasty. The North Korean economy is growing, albeit, in the 1 percent range.

Clearly, continuing the status quo is not an option. The best chance of halting this nuclear juggernaut and moving toward denuclearization is an approach of high-pressure containment. That is, an unprecedented campaign to convince the North Korean leadership that unless it halts its nuclear weapons programs and restarts diplomacy to eliminate them, then it will have neither a viable economy nor future. As Pacific Command Commander Adm. Harry Harris has put it, our goal is to bring North Korea “to its senses, not its knees.”

Chinese cooperation is essential. Beijing understands that North Korea will either be a significant source of cooperation or confrontation in a U.S.-China relationship that is being redefined, as the previous bipartisan consensus has eroded. Chinese president Xi Jinping wants more stable U.S.-China relations and increasingly sees North Korea more as a liability than an asset. This understanding could be used to stimulate much more intensive Chinese efforts vis-à-vis North Korea and achieve our goals. This policy requires several key steps:

• The United States could work with China and others to escalate sanctions. Collectively, they could step up efforts to remove North Korea’s access to the international financial system and all sources of hard currency (as was done to Iran), including sanctioning Chinese banks and entities dealing with North Korean front companies. They could shut down North Korean operations in Malaysia, China and other nations used to procure missile and nuclear components. Additionally, they could test China’s new willingness to rein in North Korea and press for joint enforcement of sanctions and more transparency on their border trade with North Korea. After a sixth nuclear test, U.S. officials should press for a full United Nations Security Council ban on coal exports and press China to significantly cut back oil shipments. Sanctions will only work if China is willing to enforce them.

• The United States could work closely with Seoul and Tokyo to develop trilateral military posture enhancements focused on countering the growing North Korean threat. These should include greatly increased missile defenses; increased Special Operations Forces deployments; and redeployment of U.S. bombers to the region.

• The United States could significantly step up its cyber reconnaissance and offensive activities. They could also constrain, disrupt and disable North Korea’s nuclear weapons-related research, programs, manufacturing and services.

• The United States could issue a new declaratory policy to North Korea. It should include the three nos.

A) No use of WMDs or it will result in the assured destruction of North Korea and reunification under Seoul’s auspices;

B) No export of nuclear equipment or fissile material or it will be intercepted by any means possible;

• America could develop ongoing back- and front-channel communications. The quiet intel-to-intel channel could be initiated through South Korea, North Korea and U.S. intelligence contacts to quietly clarify and emphasize U.S. positions—and to probe a North Korean moratorium on nuclear tests, missile tests and fissile-material production. Also, America should offer to reopen the regular U.S.-North Korea dialogue conducted by the State Department and the North Korea “New York Channel” or at higher levels. America must make clear that the United States is open to dialogue based on the September 2005 Agreed Statement, and that as North Korea walked away from that agreement, it must demonstrate sincerity (e.g. a moratorium on missile and nuclear testing) and willingness to put its nuclear weapons program back on the table to enable restarting of the Six Party Talks.

• The United States could institute an “active measures” influence campaign, which would involve distributing information in North Korea, working to improve human rights and distributing “fake news,” such as “the CIA has agents in the North Korean missile program” or “Kim Jong-un had a heart attack.” Additionally, U.S. officials should consider significantly enhancing rewards for defectors.

Finally, a clear and consistent messaging campaign is essential to garner public support for the United States and to signal our unambiguous policy to our allies and adversaries. That includes knowing when to be silent.