7 Things America Can Do to Counter International Nuclear Threats 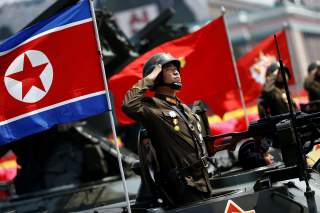 Fifteen years ago, the global effort to prevent the spread of nuclear weapons was dealt an enormous shock. In the aftermath of the dismantling of Libya’s nuclear weapons program, the world learned that Pakistani nuclear scientist Abdul Qadeer Khan, the father of his country’s atomic bomb, had operated an alarming global proliferation network. He sold know-how and goods to build the world’s most dangerous weapons to the world’s most unsavory regimes. The international community, led by the United States, tried to patch the gaping regulatory holes that Khan exploited. Today, that effort is woefully lagging.

World leaders agree about the dire, and growing, threat to peace and security of the spread of weapons of mass destruction (WMD). There are sophisticated international legal control regimes on the production and trade of WMD materials and carefully crafted diplomatic agreements governing proliferation. But where is the concerted global effort to stop the money trail?

A new Center for a New American Security report explains the yawning lack of political will and capacity to fight the financing of WMD proliferation around the world. Some jurisdictions have the resources, but their political leadership finds it more convenient to look the other way. Other states understand the danger of letting their banking and commercial sectors be exploited, but do not have the legal framework or technical capacity to act effectively. Proliferating states know exactly how to manipulate these gaps. The United Nations and major investigative journalists have pointed out how adept North Korea is in particular.

The United States is not a laggard in blocking the money trail for proliferators. But successive Congresses and presidents committed to countering WMD proliferation threats have largely failed to lead the global community to block those funding streams. Now, with uncertainty around the future of the Iran nuclear deal and U.S.-North Korean diplomatic efforts, this failure is unacceptable. The United States cannot allow this threat to persist while it has the ability to lead at home and abroad on law and policy to counter the financing of proliferation.

An international response cannot be effective without Washington’s support. America possesses unrivaled intelligence and law enforcement capacities, especially when it comes to fighting financial crime. The size and sophistication of its financial sector, thanks to ubiquity of the dollar in trade and investment, means that U.S. rules guide the international financial system. When American banks adopt new strategies, responsible banks around the world follow.

There are several things that the U.S. administration should do to address this threat. They will also advance Trump’s policy goals of supporting denuclearization on the Korean peninsula and impeding Iran’s ability to consider a dash to a bomb. First, the Trump administration should prioritize diplomatic efforts to harmonize information-sharing efforts between the United States and international counterparts, specifically Europe, to help financial institutions hunt the few suspicious transactions hiding in a sea of legitimate global commerce. It is difficult to find these red flags, and near to impossible if banks cannot easily share lead information with counterparts all over the world.

The U.S. administration should also take the lead in expanding regulatory scrutiny for proliferation transactions beyond a requirement for financial institutions that have historically been the focus of stop-the-money-for-nukes efforts. Financial institutions only see a fraction of the underlying commercial activity associated with building a nuclear weapons program. Manufacturers, shippers, and insurers also have valuable insight into these flows, but are not required to impose the same kind of vigilance measures that global banks are. Also, it’s hard for them all to share information with each other. To take another example: North Korea uses ship-to-ship transfers to evade United Nations sanctions with ease. Cracking down harder on those activities would be a good place to start.

Congress also has a role to play. Legislators have proposed measures to increase financial transparency, but have failed to find traction because of the perception that these regulations are anti-business. That attitude has allowed the use of anonymous companies to flourish in this country. Law enforcement and state and federal prosecutors have warned repeatedly that such practices allow criminals, including those abetting sanctions evasion by Russia, Iran, and North Korea, expansive means to move money around and acquire property in the United States. Passing legislation to require the collection of beneficial ownership information—data about who actually controls or benefits from the proceeds of a corporate entity—would be a powerful tool to close this loophole. Congress should also support U.S. efforts to help jurisdictions around the world improve their legal and regulatory structures to combat proliferation financing by increasing funding for technical training programs offered overseas—particularly in countries under greatest threat for proliferation.

These efforts cannot wait until some future catastrophe finally wakes the world up. Clandestine state-sponsored nuclear programs have time and again surprised the international community with their skill and speed and there is no reason to believe it won’t happen again. At this very moment, there may be a state actor—one the international community is not focused on as a WMD threat—that is abusing the open global financial system to acquire the goods and materials to build a nuclear device. Stopping that rogue actor—as well as North Korea, Iran, Syria, and other documented programs—must be a serious national-security issue and goal for financial policy leaders. And the United States must take the global leadership role.

Elizabeth Rosenberg is the senior fellow and program director for the Energy, Economics, and Security Program at the Center for a New American Security.

Neil Bhatiya is a research associate for the Energy, Economics, and Security Program at the Center for a New American Security.