75 Years after Pearl Harbor, Japan Is a Key Defender of Global Stability 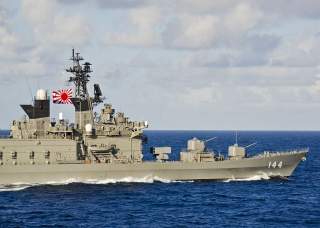 Seventy-five years ago today, Japan launched surprise attacks against the Western powers in Asia, igniting the full Pacific War that witnessed horrific war crimes by the Imperial Japanese Army and climaxed in the atomic furies over Hiroshima and Nagasaki four years later. Though best known in America for the early Sunday morning, December 7, attack on Pearl Harbor, the main object of Japanese military operations was to overwhelm European and American garrisons in Southeast Asia and break the embargo on oil and other raw materials that threatened to strangle its national power. Hong Kong, Malaya, the Philippines, Singapore and Thailand all were besieged from air and sea that day, and the rest of Southeast Asia was assaulted by January in a bold bid to destroy the balance of power in Asia and create a new, Japanese-dominated regional order.

This week it was announced that Japanese prime minister Shinzo Abe will visit Pearl Harbor with President Barack Obama in late December, finally closing the page on that day of infamy. Further, in late November, Japan’s defense minister, Tomomi Inada, inaugurated the first Japan-Association of Southeast Asian Nations (ASEAN) defense initiative, the “Vientiane Vision,” at the second informal meeting of defense ministers from Japan and ASEAN nations. In aiming explicitly to cooperate on maritime security and promote the rule of international law in Asia, Japanese Prime Minister Abe is positioning Japan as a bulwark of the post–World War II international system, just the opposite of the role his country played in 1941.

From the ashes of defeat and global ignominy in 1945, Japan’s postwar history has traced the arc of a nation both taking advantage of and contributing to the liberal international order established by the victorious Americans and their allies. As an occupied nation from 1945 to 1952, Japan was partially remade in the image of its conqueror, although the thoroughgoing purge of wartime officials and the permanent breakup of oligarchic business structures were arrested by the outbreak of the Korean War in 1950. Indeed, from an international pariah and vassal state, Japan soon became an indispensable element of the globe-girdling U.S. politico-military presence.

Japan’s uniqueness came from its near abdication of military capability in the first decades after the U.S. occupation, symbolized by the famous Article 9 of the American-written 1946 constitution, renouncing war forever. Prime Minister Shigeru Yoshida and his successors agreed instead to rely on Washington for most of Japan’s defense, in return for the freedom to focus on industrial recovery and protection of Japan’s markets. By 1964, less than twenty years after Hiroshima, as Tokyo hosted the Summer Olympics, it was hailed a postwar success story and the world’s fastest growing economy. For decades, indeed, Japan was the globe’s second-largest economy, redefining everything from consumer design to personal electronics to just-in-time inventory practices. Its standard of living remained among the highest in the world, and the Japanese aesthetic influenced everything from automobiles to interior design.

Yet Japan never developed the political influence and military strength, commensurate with its economic standing, that truly bestow superpower status. Hampered by constitutional restrictions, celebrating its pacifist society and unwilling to bear heavy foreign burdens that could derail economic plans, Japan seemed frozen in amber when it came to the world around it. And once its economic growth came to a shuddering halt in the early 1990s, so with it went much of Japan’s global influence. Almost immediately, China supplanted Japan as the next big thing, and lived up to its promise of becoming a major competitor to the United States.

Today, as Japan’s economy and military have been eclipsed by China’s, Prime Minister Shinzo Abe is making a bold stand to move Japan closer to the ideal many once assumed it would embrace, to battle for political leadership in Asia. Abe is doing so by scrapping some of the restrictions on military cooperation and activities abroad, increasing the military budget, and deepening the alliance with Washington. Even more boldly, he has moved to provide defense equipment to Southeast Asian nations, enhanced ties with India, increased Japan’s presence in the South China Sea and now unveiled the defense cooperation initiative with ASEAN.

Abe’s moves are controversial at home and abroad. China, in particular, understands that this is a challenge to Beijing’s bid for regional hegemony. But Abe has been steadfast throughout in claiming that his actions are designed to bolster the postwar liberal international order that benefited Japan more than almost any other country, and which now struggles to deal with the challenges posed by Russia, ISIS, Iran, North Korea and China. In doing so, and in going farther than his predecessors in apologizing for the war, Abe has positioned Japan as a defender of global stability, a far cry from the destructive role it played three-quarters of a century ago.

Michael Auslin, a resident scholar at the American Enterprise Institute, is the author of The End of the Asian Century, which will be released in January.