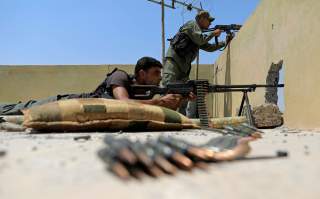 The United States and Turkey have enjoyed close ties for a good part of the past eight decades. The relationship with the United States has been Turkey’s most important exercise in foreign policy for its longstanding economic, military and intelligence support while Turkey’s geography has been a consistent source of convenience for the U.S. leaders, generals and diplomats alike.

A bulwark against the spread of communism during the Cold War, Turkey has maintained its importance in more recent years by mere fact of its geographic location. Nonetheless, it has fought wars alongside the United States, hosted missiles and men, and it has been a force multiplier for the United States by enabling it to guard its strategic interest in the Middle East and beyond.

Turkey considers the Kurdish experiment in Northern Syria as an existential threat to its national security. Turkish officials label the Democratic Union Party (PYD) and its armed affiliate People’s Protection Units (YPG), as terrorists similar to the Islamic State (ISIS).

The U.S. support rendered to the Syrian Democratic Forces (SDF)—a multiethnic, multireligious alliance comprised, at least initially, mostly of YPG fighters—in the face of staunch opposition by a close ally and despite the historically consistent and positive nature of the alliance, raises an obvious question into the reasons behind such support.

Such a question takes on new significant when seen in the light of a recent visit to the White House by Erdogan urging Americans to stop arming the SDF.

There are a number of reasons behind the U.S. support for the Syrian Kurds and their allies within the SDF.

First, in September 2014 the United States officially started to arm and train what it called moderate Syrian rebels, including the Free Syrian Army and it’s affiliates. Reports say that the U.S. government granted $500 million in funding to opposition groups. It did not take long for the Pentagon to admit that its efforts in Syria were lagging because “[they did not] have a capable partner on the ground.” Ashton Carter, the Secretary of Defense, announced that the United States was looking for capable motivated forces on the ground to retake territory from the ISIS. The YPG turned out to be the motivated alternative that the United States was seeking.

Second, the willingness of YPG fighters to fight and their resilience in the face of a strong enemy showed when they were defending Kobane. Calls for YPG assistance led the United States and its allies to aid the YPG against the onslaught of a well-armed Islamic State. Initial contacts were established between the YPG and the United States as a result of the international coalition’s military support. Pentagon officials often described the YPG and [later] the SDF as “a reliable and capable force” that has “fought hard and sacrificed” for Syria. Indeed, the SDF units showed that they could attack, liberate and hold ground. The strength and skills that the fighters showed in Manbij entrenched the relationship between the SDF and the United States. The direct contact between the U.S. military personnel and YPG fighters and the positive experiences resulting from such contacts further strengthened their ties to the extent that American personnel were spotted wearing patches of the YPG.

Third, it became obvious for Americans early in the Syrian crisis that Turkey was, at best, a bad ally. As early as 2013, reports revealed that Turkey was providing weapons to opposition groups including Al Qaeda’s Syrian branch Jabhat al-Nusra (renamed Jabhat Fateh al-Sham in July 2016). Later, Turkey’s involvement on the side of terrorist groups became more apparent when researchers from Columbia University’s Program on Peace-building and Human Rights compiled a report revealing that Turkey had provided military equipment, logistical assistance and training to ISIS fighters, had assisted ISIS recruitment drive and facilitated the crossing of its recruits into Syria. The United States and coalition forces found that the best way to stop the cross border movement of terrorists was to support the YPG and the SDF.

Fourth, the United States needed a group that in turn needed its support and could fight effectively on the ground in Syria. Syrian Kurds are enveloped by hostile neighbors such as Turkey in the north and west, KDP-KRG in the east, the Syrian government, and ISIS in the South. The Syrian Kurds were in desperate need of support by the United States and its coalition partners and had proven their effectiveness as a disciplined fighting force. A strong symbiotic relationship between the two sides was a natural consequence of their needs and attributes.

Fifth, Erdogan’s Justice and Development Party (AKP) assumed power in Turkey in 2002. Ahmet Davutoglu, who was chief advisor to Erdogan from 2003 to 2009 and foreign minister from 2009 to 2014, believed in the notion of “strategic depth,” which provided the doctrinal framework for a dramatic shift in Turkish foreign policy. This strategy led Turkey to turn to the east. The shift in Turkey’s attention caused consternation among U.S. policymakers. Such anxieties became more apparent when Turkey asserted itself as the guardian of the Middle East during the “Arab Spring.” The country’s support for the Muslim Brotherhood and its affiliates across the region formed the focal point of the U.S. concerns about Turkey’s new priorities. In addition, since AKP’s electoral victory in 2002, the demeanor of the Turkish state became increasingly Islamist and at times bellicose to the distaste of other U.S. allies in the region and beyond. Resetting Turkey’s eastward attention thus became one of the reasons behind the U.S. support for Syrian Kurds and SDF.

Sixth, in March 2015 former Secretary of State John Kerry stated that “there is no military solution [to the Syrian crisis]; there’s only a political solution.” Kerry’s reassuring statement emboldened the Russians to intensify their direct military backing of Syrian president Bashar al-Assad. The shift in U.S. priorities was all but complete. Russia was now able to prop up the beleaguered president and give the regime a crucial position at the negotiating table.

The intense Russian involvement also dealt Iran a winning hand in Syria and the larger Middle East while further reducing options available to the United States. The tilt in the balance of power in favor of Iran, Russia and Hezbollah presented new realities in Syria. It prompted the United States to further strengthen its ties with the SDF in order to reduce Iranian and Russian clout in Syria.

Seventh, the U.S. invasion of Iraq and the “Arab Spring” brought instability to the Middle East and North Africa. Bringing stability back to the region became one of the main objectives of the United States, in particular after the emergence of the Islamic State. Looking for actors who could contribute to achieving this objective gained new importance with the U.S. government. The achievements of Syrian Kurds in maintaining a degree of stability in an otherwise chaotic land was described often as unique and it presented a good model for stability in a region witness to successive failures in democracy-building efforts.

One of the main causes of volatility in the Middle East is ethnic and sectarian conflict. The Democratic Federation of Northern Syria model presents an exceptional example of peaceful coexistence among different ethnic and religious groups. Arabs, Yazidis, Christians and Turkmen participate in the public sphere alongside the Kurdish majority. More than half of the forty-five thousand strong SDF is made of Arabs.

Research shows that instability and discrimination are among the root causes of radicalization and extremism. Support for the SDF by western powers is also support for the model that has brought stability and peaceful coexistence to areas they govern. In other words, by supporting the SDF, the United States and the West aim to bring stability to the region and fight extremism at the same time.

Eighth, while the fledgling Democratic Federation of Northern Syria–established by YPG and SDF—has become a prototype of native Middle Eastern government with secular, democratic and egalitarian values, the old established countries in the region are moving in the opposite direction (e.g. Turkey). Adopting secularism, respecting equality, notable advances in women’s rights are key factors behind the support of international community and the media for the experiment in Northern Syria.

Common interests, objectives and strategies are what binds the Democratic Federation of Northern Syria and the United States and its allies. Among those commonalities are fighting ISIS and other extremist groups, curtailing Turkish and Iranian influence in Syria and the Middle East, achieving stability and peaceful coexistence of different ethnic, sectarian and cultural groups as well as the promotion of secularism, democratic values and human rights.

Despite enormous achievements so far and the sharing of interests and objectives, a question is ever present in the minds of Kurds in Northern Syria: Will the Americans abandon us?

Sherko Kirmanj is the author of Identity and Nation in Iraq. He gained his PhD in international studies from the University of South Australia. Kirmanj lectured at the College of Law and Politics at Salahaddin University-Erbil, Kurdistan, Iraq. He was a postdoctoral fellow at the University of South Australia and is currently a Visiting Senior Lecturer at the University Utara Malaysia. His areas of interest include Iraqi politics, the Kurdish question, nation and nationalism, Islam and Islamism as well as international relations of the Middle East.